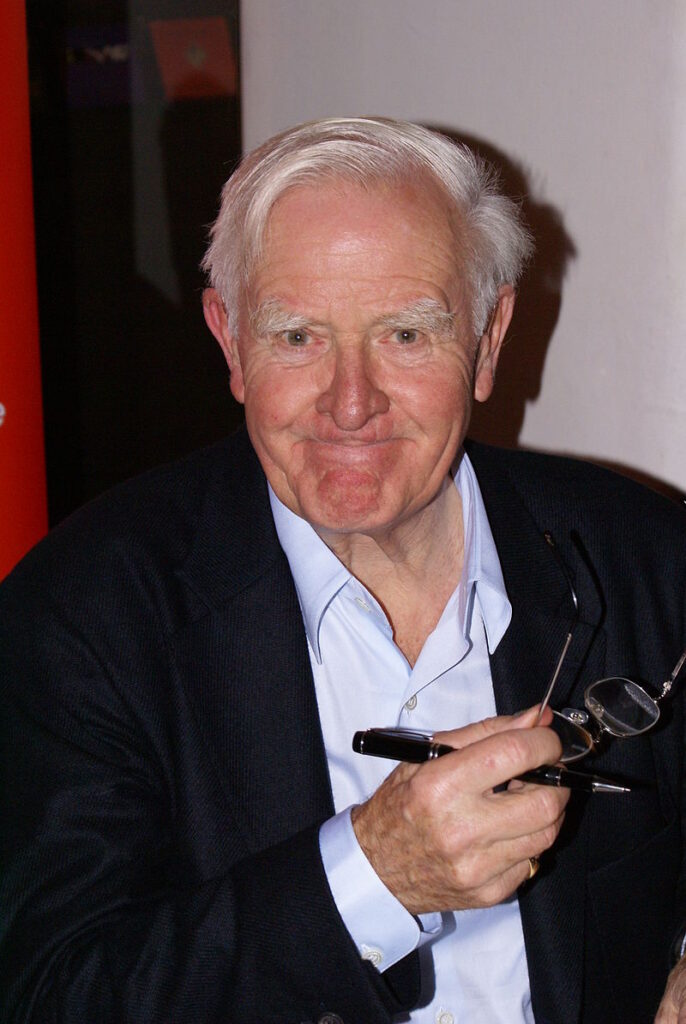 A novelist in our post-God world where ideology has so often replaced faith, and where the very value of truth and what constitutes betrayal (that most Christian of themes) becomes a moral battlefield.

My favourite novel of le Carré’s is A Perfect Spy. There is one line in Magnus Pym’s beguiling and brilliant 20th century fictional confession that has long haunted me. I can remember quoting it once in a wounded love letter to a girlfriend I had loved very much who had dumped me – or rather “betrayed” our love as I thought narcissistically at the time. However much pain she caused, she managed to act in a way that seemed true to herself. “Betrayal is like imagining when the reality isn’t good enough … Betrayal is love, as a tribute to our unlived lives”.

Perhaps only le Carré could write such a sentence. I met le Carré – or David Cornwell to use his real name – a few times, including when he visited his journalist son in LA in the nineties. The first was in November 1989 when he had published The Russia House and came to address the Cambridge Union on the fall of the Soviet empire. I managed to get an unlikely interview as the literary editor of Varsity, the university paper.

As we sat in the Union bar, I remember being struck at the immediate contrast between Cornwell the confident and successful author and his creation, the shy, tubby and bespectacled George Smiley, the clubbable head of MI6 (or the “Circus”) who lives in Chelsea and likes to spend money on clothes that don’t fit. In reality, Cornwell had a commanding presence, with a donnish drawl and clearly had an excellent tailor. “This sort of thing is very unusual for me”, he said, “I don’t go to blue-rinse literary parties. I rarely go out”.

Few novelists today can pull off being both popular and serious. Le Carré’s achievement was to use the Cold War – then 9/11 and the East/West ideological war – as a backdrop to a stage in which the secrets of the human heart are explored without judgement.

He preferred living in Cornwall where he wrote most of his twenty plus novels. As we drank some ropey house wine, he confessed to having an intellectual love affair with the Soviet Union, not denying identification with his latest protagonist, Scott Blair, a publisher-spy who falls in love with a Russian girl. Part of the attraction was that she seemed to represent something that was “unpolluted, almost virginal”; here he wasn’t talking about sexual innocence but rather a world – behind the Iron Curtain – that was still largely uncorrupted by the Western materialism and ideology.

“The traditionalist in me is terribly drawn to the Soviet Union”, Cornwell said. “They are like lost Europeans. Having been constrained for so long, their appetites are classical. They all talk like Jane Austen’s characters. They long to be reintegrated into the great European tradition”. Back in 1989 when the Berlin Wall was coming down, and “Glasnost” was the political creed of Gorbachev, such an attitude may have seemed almost romantic. With hindsight, it might look naive. Russia – at least under Putin – seems to have replaced one form of totalitarianism with another. But as Cornwell admitted, his real theme isn’t really politics – or Cold War spying – but rather each individual’s own unpredictable relationship with themselves, their moral universe and the shifting sands of human nature.

Like Greene, it is a fictional universe that is not populated by James Bond-style cardboard heroes and villains but rather a cast of misfits, loners and frauds who struggle to understand who they are as the moral certainties of earlier ages disintegrate and dissolves around them.

Le Carré’s unique cast of self-doubting characters who believed in their own amoral truths seemed only to increase his popular appeal.

Few novelists today can pull off being both popular and serious. Le Carré’s achievement was to use the Cold War – then 9/11 and the East/West ideological war – as a backdrop to a stage in which the secrets of the human heart are explored without judgement. The more godless and meaningless the 20th and 21st-century universe becomes, the more le Carré’s readers – again like Greene – are fascinated by characters whose actions have moral consequences. If the West has largely moved beyond religion, there remains something curiously reassuring about fictional worlds that display some design or purpose, even if its heroes are alienated and self-damned sinners, conmen or betrayers.

The best of le Carré’s novels (Smiley’s People, following the deeply personal Cold War battle between Smiley and Karla of the KGB is one of the great literary trilogies of the 20th century) are those that grapple with big questions of faith and with the idea of betrayal as a springboard for love. Le Carré’s childhood and years of growing up as the son of a conman father, Ronald, created a uniquely rich seam of paradoxical material (he paid for his father’s funeral but refused to attend).

Le Carré’s unique cast of self-doubting characters who believed in their own amoral truths seemed only to increase his popular appeal. He created lonely, paradoxical and adulterous characters whose personal struggles arti­culated the grey and shifting moral anxieties of the 20th century: Both Greene and Le Carré subscribed to the view that the world was rarely black and white; it was black and grey and much of Smiley’s grim cynicism came from a sense of disappointment in the world, and perhaps in himself.

He created lonely, paradoxical and adulterous characters whose personal struggles arti­culated the grey and shifting moral anxieties of the 20th century.

After a spell working in MI6 and teaching at Eton, Cornwell divorced his first wife Anne Sharp in the early 1970s. He used the name of Lady Anne to depict the unfaithful wife of George Smiley who admits to his marriage failing after being guilty of falling victim to the English disease of putting women on too high a romantic pedestal.

Yet, typically, as is clear from his semi-authorised biography, it was actually Cornwell who was the adulterer. Such imaginative re-alignments and life decisions are the very stuff of le Carré’s fiction. His father – who went to jail five times – was not what he claimed to be, and nor was Cornwell. As he said: “I have always used the spy story as a metaphor for combining political, moral and ethical choices together with a little history”.

“Fiction writing is all memory,” Cornwell told me. “By the time you are in your early twenties you have enough experience to last a lifetime. Your early loves and moods present an amazing richness. The business of literary composition is retrieval. What I find that current experience does is bang old memories to the surface in new forms”.

The themes of le Carré’s novels are secret love, simulated emotion, and the mystery of duty. He said that writing A Perfect Spy was a “hell of a slog” but admitted that he was especially satisfied with it as it was a form of exorcism, that of his past, a past riddled with deceit, fraud and deception.

By the time you are in your early twenties you have enough experience to last a lifetime. Your early loves and moods present an amazing richness. The business of literary composition is retrieval – John le Carré

In truth, in his semi-autobiographical novel, Cornwell made his father out to be a more appalling crook and fraudster than he may have been in real life. But he also admitted that it was his father’s deceit that gave him an innate understanding of the arts of self-deception. “The thing about my father is that he was always trying to advance in middle-class society without any justification. There was always financial mayhem in the background”. Maybe this was one reason why le Carré worked so tirelessly hard, pounding out novels every year into his late eighties. He was offered various high honours but refused them and would not allow his novels to be entered for prizes. In the end, he wanted just his words to speak for him.

Although no Conservative himself, one of le Carré’s greatest fans was the American novelist Tom Wolfe. In his 1989 Harper’s essay on the perilous state of American literary fiction, Stalking the Billion Footed Beast, Wolfe admitted that the “the most highly praised books of fiction have been overshadowed in literary terms by writers whom literary people customarily dismiss as “writers of popular fiction” … I am thinking of novelists such as John le Carré … who have one enormous advantage over their more literary confreres. They are not only willing to wrestle the beast; they actually love the battle”. Which is why he was working on another novel when he died.

First appeared on the CatholicHerald.co.uk