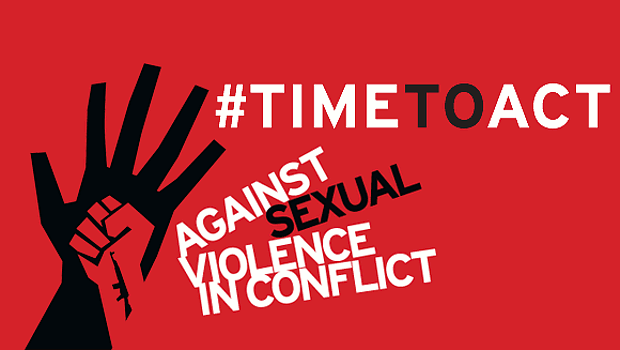 Conflicts, both old and new, are often viewed by the loss of life on the battlefield, the death and casualty lists, the land conquered, the treasures plundered, and the armies and arms deployed. But in reality, conflict is also about those on the sidelines: the innocent bystanders, the women, the children—those who bear the brunt of the conflict but receive little attention, recognition, support or, indeed, justice.

Now more than ever, we have not only the moral duty to act, but an international landscape that is calling for action. After all, in a digitalised world, we are now greeted daily with recordings, news articles and accounts of systematic conflict-related sexual violence. Far from the issue diminishing, it is becoming more acute. Yet the objectives of PSVI have always been clear: to end the culture of impunity for perpetrators; to provide support for survivors; and to document crimes of sexual violence in conflict. Those aims stood prominently at the initiative’s inception and they hold true today.

In 2012, the collaboration between a Bosnian refugee, a Yorkshireman and a Hollywood film star resulted in not only the UK Government-led initiative, but a seismic collective collaboration from the international community to address this issue. Speaking in the Foreign Office, the then Foreign Secretary Lord Hague spoke of the need for a “UK team of experts devoted to combating and preventing sexual violence in armed conflict.”

This short notice overseas deployment team was directed towards gathering evidence and testimony in the hope of supporting investigations and prosecutions. It used the expertise of doctors, lawyers, police, psychologists and forensic specialists. That team of experts was drawn down so as to help to protect victims, as well as support international organisations, lead training operations and develop laws and capabilities—all with a view to shattering the culture of impunity, ending rape as a weapon of war, bringing perpetrators to justice and raising awareness.

In the early years up to 2015, the UK deployed its team of experts no fewer than 65 times, to countries including Kosovo, Bosnia, Turkey, Mali and Kenya. These operations proved useful in gaining insight and experience and revealed the systematic use of rape and sexual violence in conflict areas around the world. The missions demonstrated not just that we were right to create such an initiative, but that there was a genuine need and requirement for action, so in 2014 the UK hosted the first ever global summit to end sexual violence in conflict, attracting 1,700 delegates from around the world and bringing together survivors, experts and Governments, all with the aim of addressing rape as a weapon of war.

Under UK leadership, we brought together 156 countries at the UN to denounce the use of rape as a weapon of war through the UN declaration of commitment to end sexual violence in conflict. The early success of that initiative was readily apparent: teams of experts were being deployed; the UK political leadership was ever present; the international community was full square behind the resolutions of the day; and countries were supporting PSVI through their own domestic and international training programmes. The action was tangible, the results were measurable and the optimism was infectious.

Unfortunately, as is so often the case, a change of Ministers and Governments saw PSVI pushed down the agenda. The high funding levels of 2013, 2014, 2015 and 2016 were steadily reduced. The PSVI team was amalgamated into different sections of the now Foreign, Commonwealth and Development Office as opposed to remaining as a stand-alone body. The levels of deployment were scaled back: from 2016 to 2020 they were reduced by almost 50%, despite the number of conflicts and the documentation of sexual violence increasing over that period. Today, the international community is no more at peace than it was nine years ago, so it is essential to fulfil our obligations to PSVI.

We now have a US President who has form in addressing gender-based violence and preventing sexual violence in conflict. With America resurgent and talking about multilateralism, that should be the hook on which we can hang our coat to ensure that initiatives such as PSVI are able to flourish over the coming years.

In Ethiopia, widespread sexual violence against the people of Tigray is ongoing. On Monday, I asked the Minister whether we would be deploying our PSVI team of experts to that area; I hope he might be able to answer when he responds to the debate. In Bangladesh, the Rohingyas are gathered in refugee camps and are detailing the appalling acts of sexual violence conducted against them in Myanmar. In Nigeria, the terrorist organisation Boko Haram kidnaps girls and forces them into marriage, as well as subjecting them to acts of sexual violence. In Iraq, we are only just beginning to learn about the true extent of sexual violence committed by ISIS.

Last year, the UN predicted that there would be 31 million more cases of sexual violence in conflict during the pandemic alone, and 2 million more cases of female genital mutilation. This crisis has been ongoing and must be addressed. The list goes on and on, yet the one common thread among all instances is that the perpetrators of these crimes will, in all likelihood, escape justice. Tackling rape in war, providing justice and supporting survivors—all are integral to peace negotiations, conflict resolution and helping communities and countries to recover and rebuild after conflicts.

The success of the weekend past shows that the Government can convene global leaders, reach international agreements and strike new trade deals—all of which I consider to be part of global Britain’s agenda. The pandemic has reasserted the need for the international community to work together, not just to defeat covid but to address the major global challenges that humanity faces. From climate change to girls’ education to tackling conflict-related sexual violence, the only resolution to these issues will arrive through international agreement and co-operation and designated leadership and action. The UK has shown that leadership in previous years and can do so again. It was particularly welcome that at the summit and in our own communiqué we committed to consider how best to strengthen international architecture for conflict-related sexual violence. However, I might go further and ask whether the Government will consider adopting the suggestion of the G7’s own gender equality advisory council, which called for an international convention to eliminate the use of sexual violence as a weapon of war, with clear consequences for perpetrators and for Governments who fail to act.

Given our own G7 communiqué calling for the strengthening of international architecture for conflict-related sexual violence, I have the following, I hope helpful, suggestions. First, a new international body should be created in the international community to collect and preserve evidence of conflict-related sexual violence and help bring perpetrators to justice. Providing support for survivors and delivering justice are necessities that cannot be overlooked. After all, it is not just the absence of conflict that denotes peace, but the presence of justice.

Secondly, responsibility for the PSVI must be restored to the Foreign Secretary. At this point, I would like to apologise to Lord Ahmad, because I am trying to take a job away from him. He has done a sterling job in promoting the Murad code and the faith leadership declaration, but top-level leadership is needed on this issue. It must be viewed not as a supplementary matter but as an integral part of the Government’s agenda, and that is where it must be firmly placed.

Thirdly, the PSVI must be run with a long-term funding cycle and strategy. The yo-yoing of budgets, as highlighted by the Independent Commission for Aid Impact, restricts the initiative’s ability to address deep-rooted issues. Instead, we should seek to create a long-term, 10-year plan that regularly reports to Parliament on the progress made and the strategy implemented.

Fourthly, the PSVI team should be institutionally ring-fenced in the FCDO. Such a team, or unit, should be able to stand the test of time and the changing of Ministers. In ring-fencing the PSVI, we can build real institutional knowledge that is to the benefit of us at home and those abroad as well.

The G7 has reminded us all that multilateralism is once again in the ascendancy. We should seize that opportunity, create new bodies and lead successful initiatives. The Prime Minister has rightly and admirably focused on the promotion of girls’ education. I wholeheartedly support him in that mission, but the success of one should not mean failure in another. If we are to address education for girls, we will have to tackle gender-based violence.

I respectfully ask the Minister to consider the following questions. Will he work with Members across this House and the other place to help create a new international body? Will he help to ring-fence spending and create that long-term strategy for the PSVI team? Does he agree that the PSVI must be led by a Cabinet Minister, preferably the Foreign Secretary? When will the PSVI team be deployed to Ethiopia, as mentioned by Lord Ahmad on 24 May? Does he agree with the G7 gender equality advisory council recommendations? When will the PSVI global conference be held? I recognise that an election and a global pandemic have got in the way of it, but we are eagerly awaiting the opportunity to hold a second conference and reignite that leadership.

In Christina Lamb’s book, Our Bodies, Their Battlefield, which should be compulsory reading for any Member who is interested in this subject, she details the different communities around the world that have been victims of sexual violence in conflict. She makes many powerful points, but perhaps the most powerful are the words: “rape is the cheapest weapon known to man”.

It has become a tool of Government forces, militias, terrorists and criminals. It costs nothing to the perpetrator and everything to the victim. It is the weapon that brings incomprehensible harm and damage to victims. It destroys communities and societies, and it is, more often than not, responsible for sowing the seeds of future conflicts.

I am only highlighting the commitment that we made in 2012 and asking the Government to step forward to reignite their global leadership on this issue. Failure to act now not only lets down our allies and flies in the face of what we have already achieved, but can result in the blocking of other countries taking meaningful action. If the UK lacks the willpower, the ambition or the vision to renew its efforts in this area, we must be prepared to take steps to hand the initiative over to willing partners, such as America, Canada or Germany.

For the sake of the Government, and for my own sake, I hope that today they will reassert their intentions to provide that global leadership. We have the opportunity here. We have the international community waiting for us to take this step.