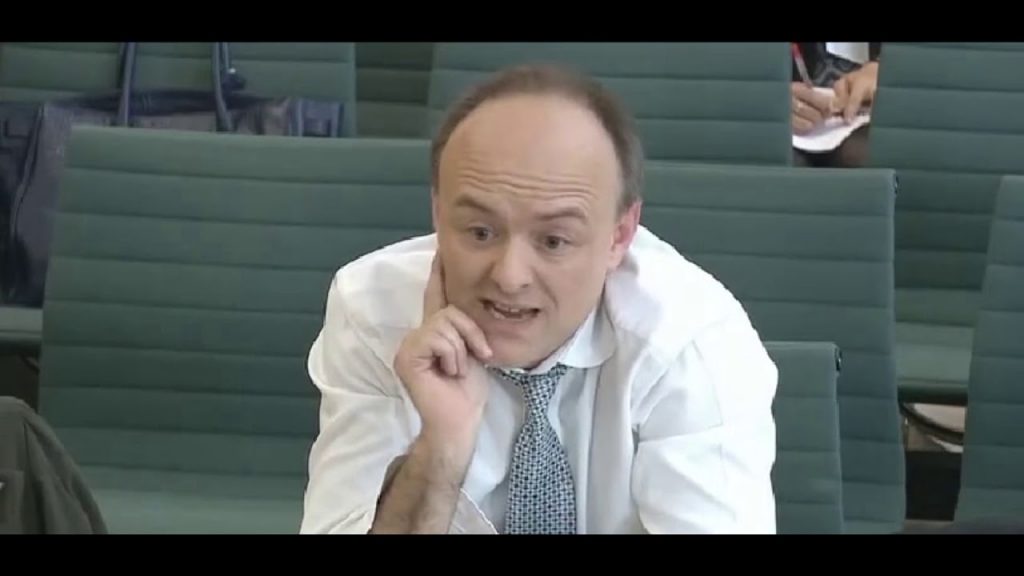 The prime minister's friend-turned-enemy is right to point out the government's misguided plans for herd immunity last year. Ministers shouldn't be allowed to deny it.

When Liz Truss appeared on Nick Ferrari’s LBC show this morning, the international trade secretary made the same seemingly reasonable but spurious claim we’re hearing from virtually everyone in government at the moment. That when the coronavirus pandemic began last Spring, the government quickly favoured a lockdown in an attempt to contain the spread of infections. “Herd immunity was never the declared strategy”, Truss said.

Luckily, someone who was influential in the government last Spring is willing to remind us what really happened: Dominic Cummings. In the latest of his extraordinary (and extraordinarily long) tweet threads about the pitfalls of Downing Street decision-making, the PM’s former strategy guru lashed out at the “V. foolish and appalling […] lie” that herd immunity wasn’t Plan A during the early months of 2020. And for too long.

Herd immunity, of course, was Plan A. It was also, contrary to Truss’s declaration on LBC, the declared Plan A. (That Truss leaned on confidential Cabinet meetings to substantiate her point should tell us all we need to know.)

Tracking and tracing the disease in order to minimise its spread through the population was deemed unrealistic in March 2020; protecting the most vulnerable, rather, while letting COVID-19 infect up to 60 or 70% of the population, were the government’s stated intentions.

Patrick Vallance told Radio 4 as much on March 13. The chief scientific adviser said: “Our aim is to try and reduce the peak, broaden the peak, not suppress it completely.

“Also, because the vast majority of people get a mild illness, to build up some kind of herd immunity so more people are immune to this disease and we reduce the transmission.”

Meanwhile Dr David Halpern, head of the government’s Behavioural Insights Team, spoke to BBC News the same day. “There’s going to be a point, assuming the epidemic flows and grows, as we think it probably will do, where you’ll want to cocoon.”

He added: “You’ll want to protect those at-risk groups so that they basically don’t catch the disease and by the time they come out of their cocooning, herd immunity’s been achieved in the rest of the population.”

To this credit, and likely informed by panicked Department of Health officials, health secretary Matt Hancock swiftly denied these were the government’s intentions. Writing for the Sunday Telegraph on March 15, he tried to clarify. “Herd immunity is not part of [government plans]. That is a scientific concept, not a goal or a strategy.”

Yet well-informed members of the press were fully aware (possibly briefed) that herd immunity was the government’s goal and strategy, and that Chris Whitty and Patrick Vallance were taking ownership of it.

The rationale driving these plans were numerous, and for a time seemed sensible. Stringent lockdowns to contain the virus – at this point, only seen in draconian Wuhan – weren’t yet proven to work long term. The World Health Organization’s qualms about herd immunity were drowned out by questions about the body’s neutrality. And the prospect of vaccines which might bring the whole thing to an end were thought years away.

Lockdowns also went against Boris Johnson’s much-touted libertarianism, which we were told made each and every decision to restrict a soul-crushing blow to the PM.

So, at least for a short while, herd immunity was evidently the plan. Ministers may have opposed it internally or implied as much in newspaper columns, but they cannot honestly claim it was never Downing Street’s declared intention.

The evidence is less smoking gun, more an army of broadcast interviews by senior government sources.

That doesn’t mean Cummings is right about too much else. Barnard Castle is a minor misstep in the context of substantial government failures during the pandemic, but it does mean Cummings’ credibility on COVID is minute. Indeed, his claim over the weekend (also via Twitter) that with better policy the first lockdown could have been avoided altogether borders on absurd.

It’s clear that Cummings has an agenda, and isn’t a particularly reliable narrator of the Johnson premiership. But he’s absolutely right to point out Downing Street’s costly short-sightedness in the first weeks of the pandemic.

Let’s hope his select committee appearance on Wednesday morning has more of this and less of the cheap shots.