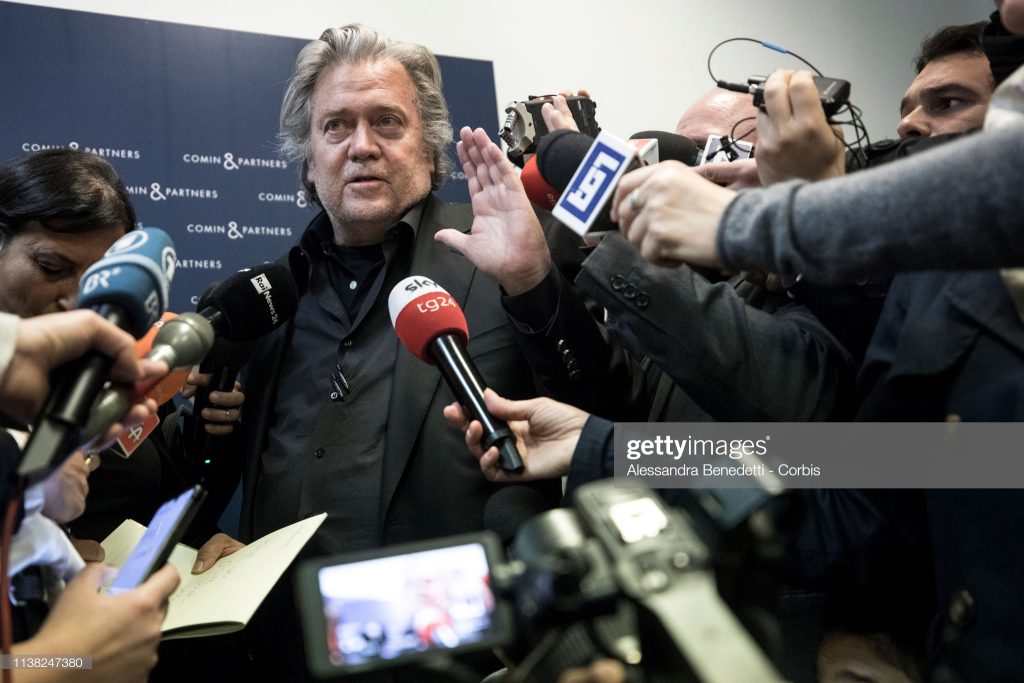 [dc]A[/dc]Andy Reid, the head coach of the NFL Super Bowl reigning champions, the Kansas City Chiefs, likes to ‘flood the zone’ in his offensive plays, sending more runners into an area of the field than the defenders can cover. This makes man to man marking impossible and creates doubt and confusion over the exact move the attackers intend to make. Like many sporting terms it’s found a home in politics, in particular thanks to Donald Trump’s former strategist Steve Bannon. In 2018 he was reported as observing that, “The Democrats don’t matter. The real opposition is the media. And the way to deal with them is to flood the zone with shit.”

We see this strategy in play in the US with the constant drum beat of attacks on the ‘mainstream media’, where the term ‘fake news’ is used against stories Donald Trump doesn’t like, regardless of whether they are true or not. The President’s own remarks can also be a source of confusion, for example in September he tweeted at voters in North Carolina, a key swing state, warning of a plot to ‘illegally take your vote away from you’ if you mail in your ballot paper. This tweet was marked as having violated Twitter’s rules on civic and election integrity, and Facebook attached a note to the same posting on its site noting the ‘history of trustworthiness in the US’ for voting by mail. These notes don’t stop the damage that is being done, through the planting of the seed of doubt, that if Donald Trump loses the election based on the count of postal votes, then it’s because of fraudulent activity.

In August the President suggested without providing any proof that the Food and Drug Administration was intentionally delaying coronavirus vaccine trials saying, ‘The deep state, or whoever, over at the FDA is making it very difficult for drugs companies to get people in order to test the vaccines and therapeutics.’ His use of the term ‘deep state’ is also catnip to the online conspiracy theorists who identify with the QAnon postings on the internet. QAnon followers believe that Donald Trump is saving the world from a satanic cult made of paedophiles and cannibals connected to Democratic Party figures, so-called deep-state actors in the security services, and Hollywood celebrities. QAnon was also recently discovered boosting social media posts that Antifa activists were deliberately starting wild fires in Oregon, which caused so much concern that it led to the FBI issuing an official statement stating that was untrue. A recent report by NBC on an internal investigation by Facebook also exposed the reach of QAnon’s network on its platform, claiming that the company had uncovered thousands of groups and pages with millions of members and followers. Trump has referred to QAnon followers as ‘people that love our country.’

We’ve seen flood the zone operations this year in the UK as well. New previously unpublished research from the cyber investigation’s specialists Harod Associates, shows how these tactics were also deployed after the media started to report about the Prime Minister’s chief aide Dominic Cummings and the trip he made to County Durham during the period of the COVID-19 lockdown. Harod used their proprietary technology to analyse the use of the hashtags #mediascum and #scummedia across fifteen different social media platforms. In the three years before May 2020 the terms were only used sporadically, but in the days leading up to Dominic Cummings’s press conference about this trip, this changed dramatically with over 4000 original posts an hour using these terms on 25th and 26th May – the day of his press conference in the garden at 10 Downing Street. This was the moment the activity peaked and a few days later it had fallen to just a few hundred postings an hour. These posts largely directed abuse at journalists, who in the view of their authors had been critical of Dominic Cummings’s behaviour, with Piers Morgan, Laura Kuenesburg and Beth Rigby being the main targets. One of the main influencer accounts directing this activity on Twitter was @TrishaPhillipss who told her followers on the morning of 25th May, ‘#ScumMedia my hashtag for the day, to get it trending you must type the hashtag. Please share & type #ScumMedia and help to get this trending or use in every tweet. We need 1200-1700 hashtags to be typed within 6 hours. Please help me send a message?! #ScumMedia.’ Some of this activity was from automated bot accounts on twitter, but many were real people. The Harod research does not identify who was behind this campaign, but it was a clearly orchestrated flooding of the zone during those intense few days.

In this context flooding the zone means drowning out the views of the mainstream media with huge amounts of content generated by unconventional sources often using alternative facts. The objective of all of this is not necessarily to persuade you of a certain point of view, but to leave you in a position where you don’t know what to believe at all. In the words of Boxer, the carthorse, in George Orwell’s Animal Farm, all you need to know is that the leader ‘is always right.’

Much of the debate about politics on social media following the Cambridge Analytica scandal in 2018 has focused on the micro-targeting of political adverts using data derived from the profiling of social media accounts. You may not have told Facebook what your political views are, but it knows anyway and can group you, without your knowledge or consent, with other like-minded people you have never met. YouTube does not now allow this, and Twitter has stopped political advertising altogether. After pressure to take down false claims in political adverts Facebook has now agreed to ban all political ads in the last week of this year’s US Presidential election campaign, but will still not otherwise act against people spreading known lies through ads or other tools, unless it considers them to be causing an imminent risk to public health.

However, this is only part of the picture. One of the real issues is how campaigners operating in the shadows can change people’s perceptions of news and events through the mass manipulation of hundreds of thousands of pages, groups and accounts. This could be the Russians, or domestic campaigners, and you don’t need adverts to do this effectively. This danger will only grow as these channels increasingly become peoples gateway to the news and the methods used to attract attention will increase in sophistication. We have already seen political ‘deep fake’ films negatively distorting the voice and appearance of senior political figures like the Speaker of the House of Representatives Nancy Pelosi. As this technology becomes cheaper and more widely available its use will only grow. Such content isn’t about freedom of speech, but a malicious attempt to mislead people. As the algorithms of social media are designed to hold your attention for the longest possible time, the more you engage with this type of content, the more you will see of it. In 2016, internal Facebook research identified that 60% of people who joined groups promoting extremist content, did so at the platform’s recommendation, based on their data profile. Winning the Presidential election in 2020 is not about targeting the most effective advert to floating voters but trying to change the focus of the lens through which they see the world.

Damian Collins has been MP for Folkestone and Hythe since 2010. He was Chairman of the House of Commons select committee for Digital, Culture, Media and Sport from 2016 to 2019, and is currently the host of the Infotagion podcast.