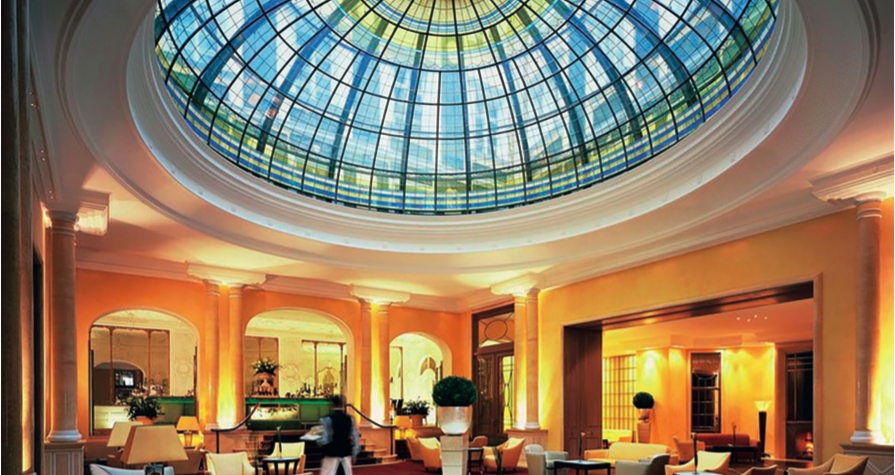 If Joe Biden wins against Trump  in November, which DC’s authoritative Cook Report are now confidently predicting (even Downing Street are said to be resigned to this result), it will present German Chancellor Angela Merkel with a sweet opportunity for revenge against Trump.

First step will likely be an invitation to Germany for Biden, and/or his new Democrat Secretary of State, in an attempt to repair the damage done to EU/US relations by the isolationist Trump regime. The idea will be – over smoked salmon bagels – to forge much closer ties with the EU, and tie up any US-UK trade deal in regulatory knots of Gordian proportions.

But where would this meeting take place ? When U.S. Vice President Mike Pence shook hands with German Chancellor Angela Merkel at the Munich Security Conference back in 2019, it was no coincidence the meeting took place at Merkel’s favourite German power summit hotel: the Bayerischer Hof close to the Bavarian capital’s famous Frauenkirche.

Munich might not immediately suggest itself as a prime location for the global elite, but the Bavarian capital’s five-star Bayerischer Hof, built in 1841 at the behest of King Ludwig I and owned for the past 120 years by the Volkhardt family, has become just that: a destination for the rich and the powerful. It has played host to the likes of Henry Ford, Grace Kelly, Muhammad Ali and Bill Clinton, so it’s no surprise that the Bayerischer Hof frequently features in ‘Best in Europe’ hotel rankings.

Owner Innegrit Volkhardt, heiress of the family fortune and a personal friend of Angela Merkel, has focused her efforts on sustaining the hotel as a discreet go-to for those with deep pockets. Innegrit’s great- grandfather, Hermann Volkhardt, bought the Bayerischer Hof in the late 19th century and transformed it into Europe’s largest hotel – creating a legacy that Innegrit is dedicated to protecting.

Innegrit is keen to stress that it is pristine service that defines the Volkhardt name above all else. “My great-grandfather actually started with a coffeehouse in Munich, and all the most important people in the city went there,” she tells me. “From that success, he opened another coffeehouse, and another, and only then did he buy the first hotel. We’ve always worked for the people of Munich – and it still feels like a local hotel, wherever you have come from.”

The Bayerischer Hof is celebrating the re-opening of the Palais Keller, the hotel’s 47-year-old underground restaurant, which promises the best of modern Bavarian cuisine.

Originally a 15th-century salt warehouse, the 682 square-metre space with seating for 192 guests is a tasteful ode to Bavaria’s past, as well as something of a showcase for the region’s contemporary dining scene.

Innegrit is keen to stress that it is pristine service that defines the Volkhardt name above all else.

Belgian interior designer Axel Vervoordt – who has worked with Kanye West, Calvin Klein and Robert De Niro and also redeveloped the medieval Gravenwezel Castle just outside Antwerp – brings modernity to what might otherwise be a stuffy offering. The tableware is by the Japanese ceramic artist Kosi Hidama, made in Vervoordt’s Gravenwezel workshop.

Bayerischer Hof hired Vervoordt for his “unobtrusive yet unmistakable” style, and this has its culinary counterpart in head chef Tobias Heinze’s subtle menu. The horseradish soup is a speciality – a tangy delight with a vigour that’s matched by the impressive draught-beer selection. There are other drinks on offer, of course, but when in Munich… 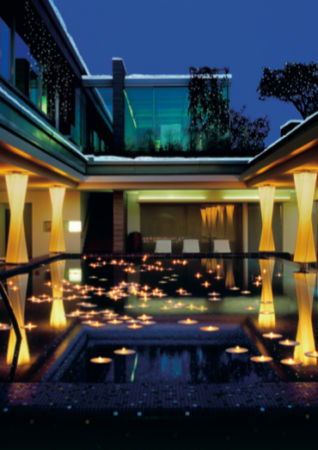 The restaurant’s minimalist East Asian interior is a foil for some of the heavier offer- ings on the plate. For my main course, I tried the Bavarian sausages, which come either in the form of two stodgy white numbers with a local sweet mustard or in six Bavarian thins atop a bed of potato and sauerkraut.

After this rich meal, I feel the need to burn some calories – so I head for the rooftop gym. With a small wooden terrace and a stunning view of the city, it’s a place like no other for working out. Admittedly, it’s small for a hotel of this size – the Bayerischer Hof has 340 rooms – but during my stay it wasn’t so very busy. Perhaps some of the other guests were tending to body and soul in the Blue Spa, a four-storey refuge of saunas, showers and massage suites crowned by a softly lit pool with a sliding glass roof. Like so much else, the Germans take their spas seriously.

As well as the restored Palais Keller, Axel Vervoordt has applied his sparse design approach in remodelling the Hof’s eighth- floor wing. The result is a triumph: earthy tones, subtle decorative elements, a natural feel. There’s something very German, too, about the efficient configuration of the rooms.

“I adore her. The world listens to what she says. She’s a very hard worker, but she also has a big heart”, says Volkhardt

It’s quite a coup for Innegrit Volkhardt, who is characteristically modest. “Our secret is simply to have a big capacity, a good quality of service and enough staff to handle it,” she says. “More importantly, people know that we’re a family business and that we’ve been here for generations. Munich is quite a small city. Everyone knows everyone!”

Volkhardt is also well known for her friendship with Angela Merkel. I apologise before asking her the question everyone wants to know the answer to: what’s she like? For the first time in our conversation, Volkhardt becomes animated – emotional even. “I adore her. The world listens to what she says. She’s a very hard worker, but she also has a big heart. These are attributes not too many people have. I know her as a guest and as a human being, and she’s wonderful.”

It’s easy to see why political and financial elites have favoured the Bayerischer Hof for so long. It’s partly to do with Volkhardt herself, whose discretion survives an intense round of Mace questioning: she laughs off my request for anecdotes about Michael Jackson or Bill Clinton with good humour. But isn’t that the point for the powerful and influential? To find a place where everyone knows your name but isn’t prepared to talk about you once you’ve checked out. Nowhere does that quite like the Bayerischer Hof.