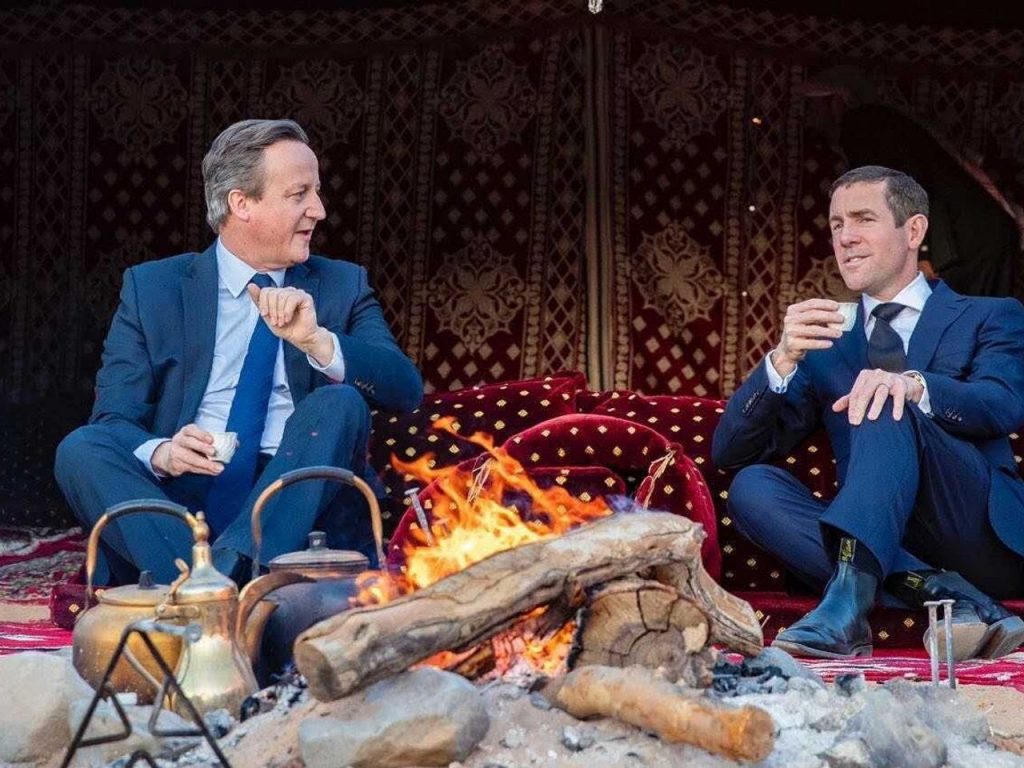 David Cameron isn't the only one, observes Marie Le Conte. What else do we expect ex-politicians to do?

I am not here to talk about how bad the whole Cameron/Greensill affair is, not because I do not think it is bad – it is clearly appalling – but because I feel this has already been well covered. Instead I’d like to talk about how embarrassing it is; how mortifying it feels to realise how little time it can take for a former Prime Minister to turn into a bit of a spiv.

From the many, begging texts to ministers and aides to the quasi-comical desert camping trip with Mohammed bin Salman, the entire thing has been hard to watch. I find this interesting because I believe it would have still been cringeworthy if he had done it for a more palatable company.

It is a scandal because Greensill is what it is, but it is embarrassing because David Cameron once ran the country, and now he runs around pretending to be important, because he has nothing else to do. The problem is: he isn’t the only one.

When Nick Clegg announced that he would be joining Facebook, everyone agreed it was pretty embarrassing. He’d spent five years uneasily going with the whims of a mostly Conservative government, and now he would have to do the same with Mark Zuckerberg. The image of pasty, geeky Clegg starting a new life among the California tech bros was funny and absurd.

When George Osborne was named as the new editor of the Evening Standard, there was outrage. The last brush he’d had with journalism had been as an intern decades earlier, and he was still a Member of Parliament when he got the job. It was jarring, and felt wrong.

Though I am not in the habit of playing devil’s advocate, there is an uneasy question I would like to ask. What else were we expecting these people to do? Cameron, Clegg and Osborne left high office at an unusually young age. They were in charge of the country for years and their time was over before any of them had even reached 50. Of course they were never going to retire quietly.

It was obvious from the start; not long after Cameron left Downing Street, I remember reading a funny and sad anecdote about how the former PM kept texting all his acquaintances to ask if they fancied a game of tennis. Awkwardly, the source had told the paper, they eventually had to tell the man that, well, they all had jobs, and couldn’t sack it all off for a quiet Tuesday afternoon game.

It reminded me of shamefully bland small talk I made some time ago with someone who worked for the Tony Blair Institute. We were both due to speak at a breakfast event and I am incapable of being sociable before noon; wracking my brain for ways to keep the conversation going, I asked him if Tony ever came to the pub with them. Of course he doesn’t, was the predictable answer; he can’t even walk down the street alone, so after work pints are squarely out of the question.

My violin was small, but not entirely non-existent; it must be extraordinarily odd to still feel (and be) fairly young, yet know that you will never be able to have a normal life again. Politics was not built with early achievers in mind; we have nothing to offer them once they have done their duty.

Though we are largely fine with former politicians quietly going to make a lot of money elsewhere, cash is only one part of the equation; what these people obviously miss and crave is power, and the sense that they matter.

The problem, of course, is that power outside of mainstream politics is hard to get, and easily controversial. Big Tech is destroying the world; the press should be separate from politicians; lobbying can get very dodgy very quickly. What else is there? Westminster is full of people who are very easily bored, and few jobs provide a similar adrenaline rush. We keep creating monsters then being shocked at what they do once released into the wild.

As often with this column, I do not really have any answers to provide to this conundrum; one of the joys of journalism is that you can expose problems without being expected to solve them. In case this wasn’t clear, I am also not making apologies for these men behaving badly, or at least questionably.

Instead, I believe their choices point to a wider structural issue, and one which will keep cropping up. Electing young politicians is one thing; spitting them back out while they are still young is another. Many more important lessons should be learnt from the Greensill scandal, but once the dust has settled, this feels worth discussing too.