Why ‘cancelling’ MP-poets is Woke tyranny 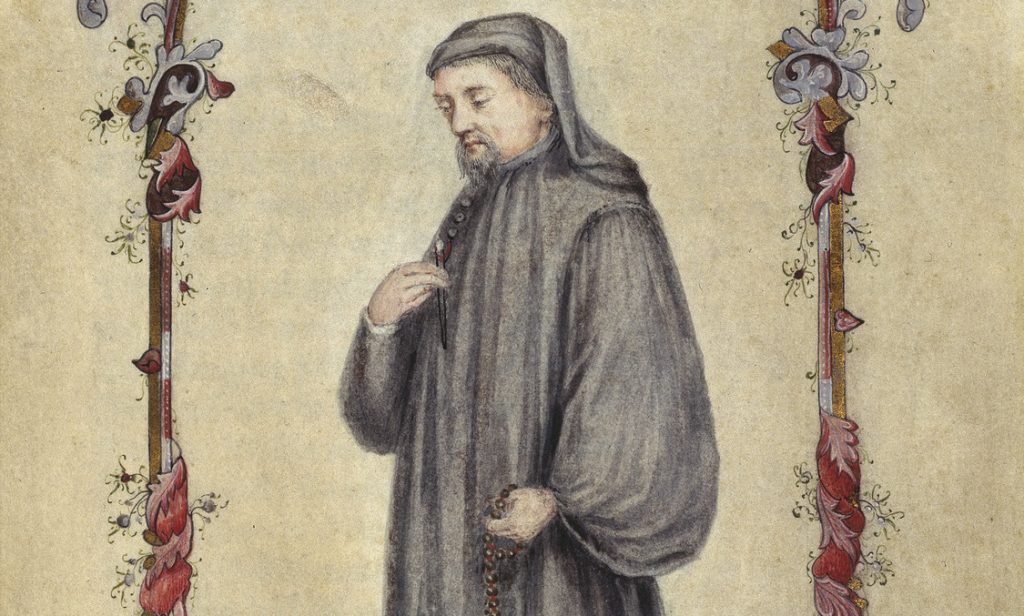 A 1478 portrait of the great poet. British Library

We still have plenty to learn from the father of English literature and former MP, argues William Cash

Most people, if they know anything about Chaucer, remember him as the Father of English Poetry and the author of the Canterbury Tales. What many people forget is that he was also an MP-poet representing Kent in 1386, under Edward III, and Chaucer’s son Thomas was later Speaker of the Commons.

The furore over Chaucer being culled from the English Literature taught at Leicester University, in an attempt at ‘decolonising’ the syllabus, is the very worst sort of cultural censorship. Not the least as Leicester – thanks to its archaeology department recently finding the bones of Richard III under a car park – has been turned into something of a pilgrimage shrine for medieval scholarship and tourism.

It is also ignorant to sideline Chaucer as his writing was all about diversity and popular appeal. Before Chaucer, poets wrote about religion, myths and idealized aristocratic court love. In other words, elitist subjects that people couldn’t relate to even if they could read (and most couldn’t).

It was Chaucer’s great achievement as the poet of the Canterbury Tales to introduce a range of lower and middle class characters, such as the Miller, or Franklin, as well as all-too-human female characters – like the serial marrying Wife of Bath – that was a form of literary ‘levelling up’ as such characters had hardly been dramatised before.

So for Leicester University to cancel his contribution to English Literature in favour of ‘sex and racial’ modules whilst also boasting in its annual report of itself as being ‘Elite Without Being Elitist’ is hypocrisy on a grand scale. The idea that cancelling Chaucer will ‘decolonise’ the literature syllabus is risible. Chaucer was well travelled and anything but insular or parochial. The Tales come out of his travels to Italy and his education at the Sorbonne and the tradition of European literature.

In fact, Chaucer has a great many lessons to teach us today. I hadn’t realised until I began re-reading the Canterbury Tales that Chaucer’s 14th century medieval  ‘road trip’ poem – twenty nine pilgrims heading off from the Tabard Inn in Southwark for a story-telling spring jaunt to Canterbury – would never have been written were it not the Florence plague of 1348.  It was this that inspired Boccaccio to compose his Decameron.

Chaucer became acquainted with Boccaccio’s in his Italian travels of the 1370s as a court diplomat. He was a part time poet. Indeed, his Canterbury Tales was essentially a ‘roustabout’ pilgrimage holiday adventure story to the shrine of St Thomas Becket. Anybody who gets to the end will know that Canterbury is a metaphor for Jerusalem. Perhaps here we are getting to the rub of what offends the thought police of Leicester University: not only is Chaucer white, an MP and monarchist (Marvell flirted with republicanism and stayed on side with Cromwell) but worst of all, he was a Christian poet.

The paradox is that a diplomat-poet like Chaucer was a radical who used poetry and writing as a form of social mobility and advancement. The ‘high-low’ social mess of medieval society was probably less elitist and money-shielded than today’s apartheid of 1% Rich v the Rest. The reason Chaucer – the educated, middle-class son of a wine merchant with court connections – became such a court celebrity was because he was a poet of the world.

When he writes in the Knight’s Tale that the nobleman’s cotton tunic had rust-mark stains from wearing chain mail after coming back from war,  we feel we are stepping into the 14th century world of the Canterbury pilgrimage, although Chaucer makes it clear that most soi disant ‘pilgrims’ regarded such a journey as a form of holiday, or even a marriage market (the Wife of Bath has gone through five husbands, and is maybe looking for a sixth).

The Canterbury Tales are chastening today as a ribald satire on the very idea of going on a pilgrimage, a form of travel often revived in times of plague or war. Chaucer’s art was forged the hard way. Not just on the actual battlefield (Edward III paid a £16 ransom for him after being taken prisoner near Reims) but more importantly, he had to fight even greater life trials after he found himself suddenly out of a job as the king’s chief wool customs officer, through no fault of his own. In November 1386, he was ‘denounced’, forced to resign, turfed out of his London home and began seven years of penniless seclusion in Kent, cut off from his courtly audience.

Yet Divine Providence works in mysterious ways. It was this reversal of fortune that was to make Chaucer the father of English poetry as he was forced to write for a wholly new audience, outside the court: the public. Despite their racy fabliaux comedy, the tales were born out of adversity.  Although never rich – his last work was a begging letter to the king called ‘The Complaint to His Purse’ – he had at least self-invested in that most critical form of capital for an artist: human experience.