Brighton Revisited: A Lesson for the PM? 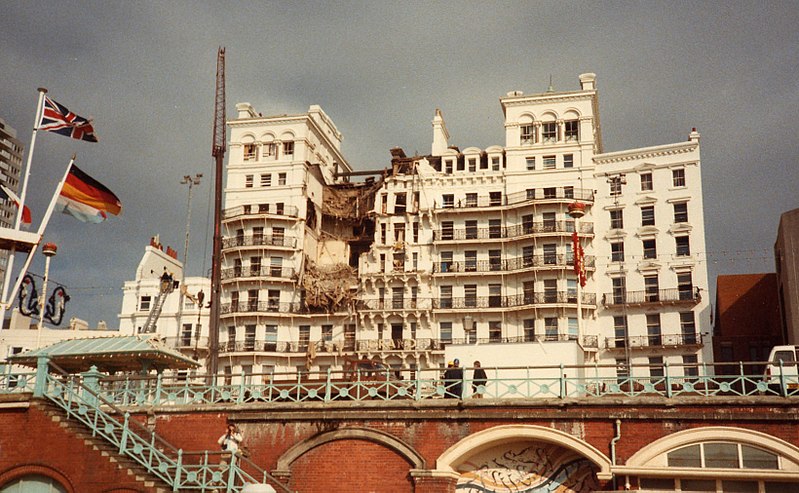 The Grand Hotel in Brighton following the IRA bomb attack. The photo was taken on the morning of October 12 1984, some hours after the blast.

I’ve scoured the papers today – October 12th – and there’s no mention of Brighton or the Brighton Grand. That’s despite it still being the week of party conference ‘season’ which was traditionally known by hacks and ministers alike as  ‘politics-by-the-sea’ and was an annual form of political pilgrimage.

It was at 2.54 a.m on October 12th 1984 that Margaret Thatcher was nearly assassinated by a bomb planted by the IRA’s Patrick Magee in an act of invisible political terrorism that killed five (including a Conservative MP) and injured 31.

Today, of course, the main threat to our country today is not a hidden bomb in a hotel suite but a disease that threatens to blow up the economy, as well as nearly killing our PM.

But are there any lessons to be learnt from how the two Tory governments handled the existential autumn crisis, albeit 36 years apart?

With this year’s party conference season cancelled (and the Tories once again -pre-Covid – booking out the Birmingham Hyatt and Labour heading to Liverpool),  I decided to visit Brighton instead and check into the Brighton Grand.

Indeed, my wife and I stayed in a sea-front room on the sixth floor just a few doors down from room (629) in which IRA agent Patrick Magee stayed in 1984 during the weekend of 14-17th Sept 1984, a month before Thatcher and her cabinet were to stay in the hotel.

Instead of walking the pier or visiting Plumpton races, he busied himself with removing the bath and placing a homemade 20 pound gelignite bomb under the steel bath made mainly from videocassette recorder components. 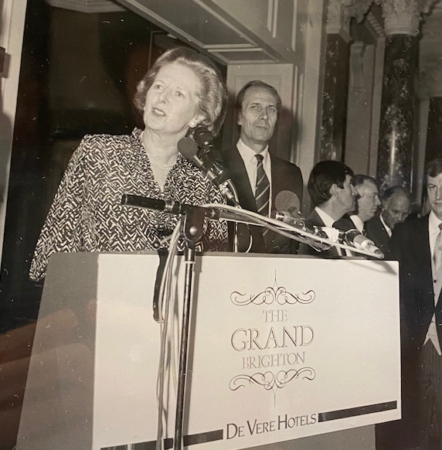 Margaret Thatcher and Lord Tebbit at the Grand in 1984. (Photograph on display at the Grand)

Mrs Thatcher was awake at  2.54 am when the bomb went off, five floors above her, and still working on her conference speech. Fortunately, she wasn’t harmed – a testament to Victorian building skills and materials. And she was addressing the conference the next morning at 9.30am, displaying quite remarkable coolness after seeing the hotel facade blown to pieces and colleagues and friends lifted out in body bags or stretchers.

My father had only just become a Tory MP a few months earlier at the Stafford by-election and was 44. He is now 80 and the oldest MP in the Commons but can still remember the blast which shook his room – and he was staying in a B & B a few hundred yards along the sea-front. Yet just like the Ritz hotel – where Thatcher died – the Brighton Grand remains wary of being seen to profit from any association with the Brighton bombing.

But why ? With its low lit art deco cocktail bar and chic Victoria Terrace restaurant (the hotel’s famous classic afternoon tea is £24.95, with a choice of thirty teas) the hotel is just as swanky and pleasant to stay at as it was in 1984. I loved the faux wood sea-blue panelling and the rooms have been beautifully refurbished.  It remains the ne plus ultra grand dame of seafront Victorian hotels in the country, down to the doormen wearing the hotel’s quirky tartan livery (Graham Greene used to take his mistresses there and wrote parts of The End of the Affair at the hotel).

But despite such style – so much chicer than the soulless Hyatt in Birmingham – the Tories have not been back since 1984. There are just a few tributes to the memory of 12th October 1984, including a discreet brass plaque in the main lobby that was unveiled in 2009 by Lord Tebbit to mark the ‘memory of those injured and who lost their lives on 12th October 1984 at the Conservative Party Conference’.

Not far away, tucked away down a corridor, is a glass exhibition case containing a few items of memorabilia from 1984, including a photo of what looks like Mrs Thatcher’s chintzy suite with a four-poster bed, the programme of the official re-opening of the hotel in August 1986, and a photo of the hotel covered in scaffolding during its two year renovation which cost £11 1million. 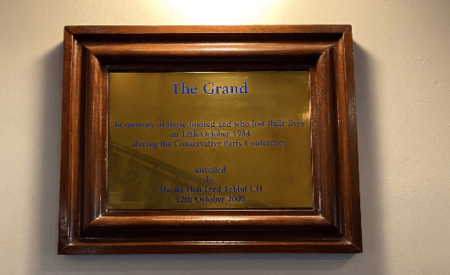 Commemorative plaque in the main lobby of the Brighton Grand unveiled by Lord Tebbit, in 2009

There is also a faded Times newspaper cutting from 1986 with a report on the re-opening in which it states there would be ‘no reminders’ of the tragic events of the early morning of 12th October 1984, with the assassination attempt being ghosted out. Indeed Patrick Magee’s room 629 was not even included along the 6th floor (it has since been reinstated) and Thatcher’s suite was turned into a new Presidential Suite.

In a very deliberate attempt to turn its back on that fateful night, the hotel manager Richard Baker was quoted as saying: ‘We are not living in the past.. we have a brand new hotel and our challenge is to make it work’.

Yet so desperate are the Tories not to be defined by the ghost of Brighton past, the party hasn’t been back to Brighton since 1984. Indeed, it is 13 years since the Conservative Party hosted a seaside autumn party conference. Next year the prime minister should support struggling coastal communities, along with the great English seaside, by returning to the tradition of politics-by-the-sea.

It was on 11 October 1985 when Margaret Thatcher told conference that “We all love Blackpool”. Like Brighton, no longer. That the Tories have not held a conference in Blackpool since 2007 – and Labour since 2002 – is symptomatic of how paranoid party leaders have become with being associated with the metropolitan gospel of British decline-ism. In a notorious Times column, Matthew Parris described seaside towns like Clacton as resorts “trying not to die”, being symbols of failure and social depression.

This is the wrong approach. One of Labour’s greatest mistakes at the last election was to ignore the seaside vote in towns like Blackpool, where homelessness and disadvantaged pupils are well above the national average. Coastal communities have ageing (ie voting) populations. The disaffected coastal vote, including fishing ports like Grimsby, can have a political sting – 67.5 per cent of Blackpool voted Leave in 2016. While Parris advised the Tories to ignore rundown coastal towns, the prime minister can’t afford not to tackle their problems.

With Covid accelerating the decline of many coastal towns, the pandemic presents an opportunity to spearhead the economic and cultural revival of our seaside resorts. The staycation boom offers a chance for dynamic reinvention of one of our greatest national assets.

Matthew Parris described seaside towns like Clacton as resorts “trying not to die”, being symbols of failure and social depression.

Seaside – and fishing-town voters in red wall seats helped secure the prime minister his landslide. But their complex socio-economic issues – especially relating to mental health, addiction and multiple occupancy housing – need radical new policies if Britain is to prosper post-Brexit. Of the top five areas to vote Leave, every one was a coastal town or city.

One of the city areas singled out in the government’s latest Deprivation Index survey included a housing estate behind Blackpool’s promenade, close to the Winter Gardens where Margaret Thatcher made her famous 1985 speech saying Britain was no longer the sick man of Europe. Many in these coastal communities feel abandoned. Traditional maritime industries have vanished, creating unemployment, drug death and transitory problems. In Great Yarmouth, one-third of residents lack any basic qualifications. And the area has the highest national rate of 15-17-year-old pregnancies.

The reality of life in Blackpool holds up a shattered mirror to the ever-widening social divides between the ‘Lucky Haves’ and the ‘Left Behinders’. Which is why the prime minister should appoint a seaside tsar to close this gap and make our coastal communities a place for business investment as well as popular family holiday destinations. Giving communities back their spirit of place – through regenerated heritage and new galleries like Margate’s Turner Contemporary – helps redeem the past. 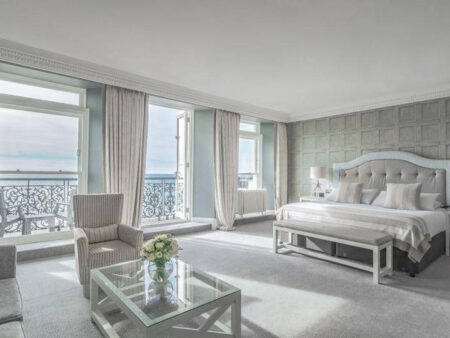 A seafront suite at the Brighton Grand today

Brighton and Bournemouth thrive as creative hubs by embracing their past and diversity, not turning away from it. The Greens and Lib Dems have rightly hosted recent conferences in both cities. The Tories should return to Blackpool, and not just for a 2022 spring conference. A return to the Brighton Grand for Boris and his Cabinet would be a fitting act of support for a British seaside renaissance.

It would also show that the Tories were once again the party of strong leadership. At 4am, just an hour after the IRA bomb had nearly blown her suite up, Thatcher gave an interview to the BBC saying the conference would ‘go on’ as usual, despite the calamitous events. Her friend Alistair McAlpine even managed to get M & S to open early so that MPs and party personnel staying at the hotel could buy some new clothes to be on parade as usual at 9am.

Her defiance against an invisible terror was widely described as a ‘Churchillian moment’ of stoicism, leading comparisons with the steely character of Britain’s war leader. By refusing to submit to fear she found her popularity soared. Maybe Downing Street should take note.