Front and Centre of Brussels Hospitality

One of the things that the European Parliament certainly does better than its UK Commons counterpart is the quality and range of its EU parliamentary wine list. That’s if you can get a table in the stately (and well-subsidised) main dining room that caters for Eurocrats and MEPs.

The reason the EU Parliament members’ restaurant wine list is superior to the Commons is partly thanks to disgraced tycoon Robert Maxwell, who famously sold off (to himself) the old Commons cellar when he was an MP and in charge of it. Ever since, the Commons wine list – and food for that matter – has resembled that of an AA three-star hotel carvery (with many MPs hanging their jackets off the back of chairs).

Another reason that the EU Parliament wine list is better, is that it officially requires that every EU country member is represented on there. Few will shed a tear to see English wine removed, although it’s worth noting that the last time I was there, seated opposite an English MEP wearing a starched bib, I was surprised to see it was one of the most expensive on the 28-country list.

Thanks to EU rules, introduced in 2006, on who is actually allowed to dine in the posh EU Parliament VIP restaurants, there’s been a sharp rise of standards in the cuisine of competing Brussels restaurants and hotel “business centres” close to the EU Parliament.

Indeed for some years now, there’s a growing sense in Brussels politico circles that the best place to dine or lunch is not in the EU Parliament at all, but rather outside the EU security zone. This column is about the search to find the chicest, expense account hotel restaurant that not only serves the EU political class but also allows them to be seen to be enhancing their status.

This need to find the best Brussels restaurants and hotels came about more than a decade ago as a result of an unpopular EU diktat that prohibited those who served the EU Commission (an estimated 30,000 officials) from dining out in lavish and “generously subsidised” EU Parliament restaurants.

Such was the demand for subsidised gourmand lunches that queues would start forming from 11.45am. Instead, EU bureaucrats and civil servants were told they have to either use their own “canteens” (not as grand as the lavish EU member restaurants) or expense their lunches and dinners in an outside restaurant.

So where is the best place to eat and stay in Brussels? My vote goes to the Hotel Amigo, first converted into a grand business hotel for the 1958 Brussels World’s Fair. 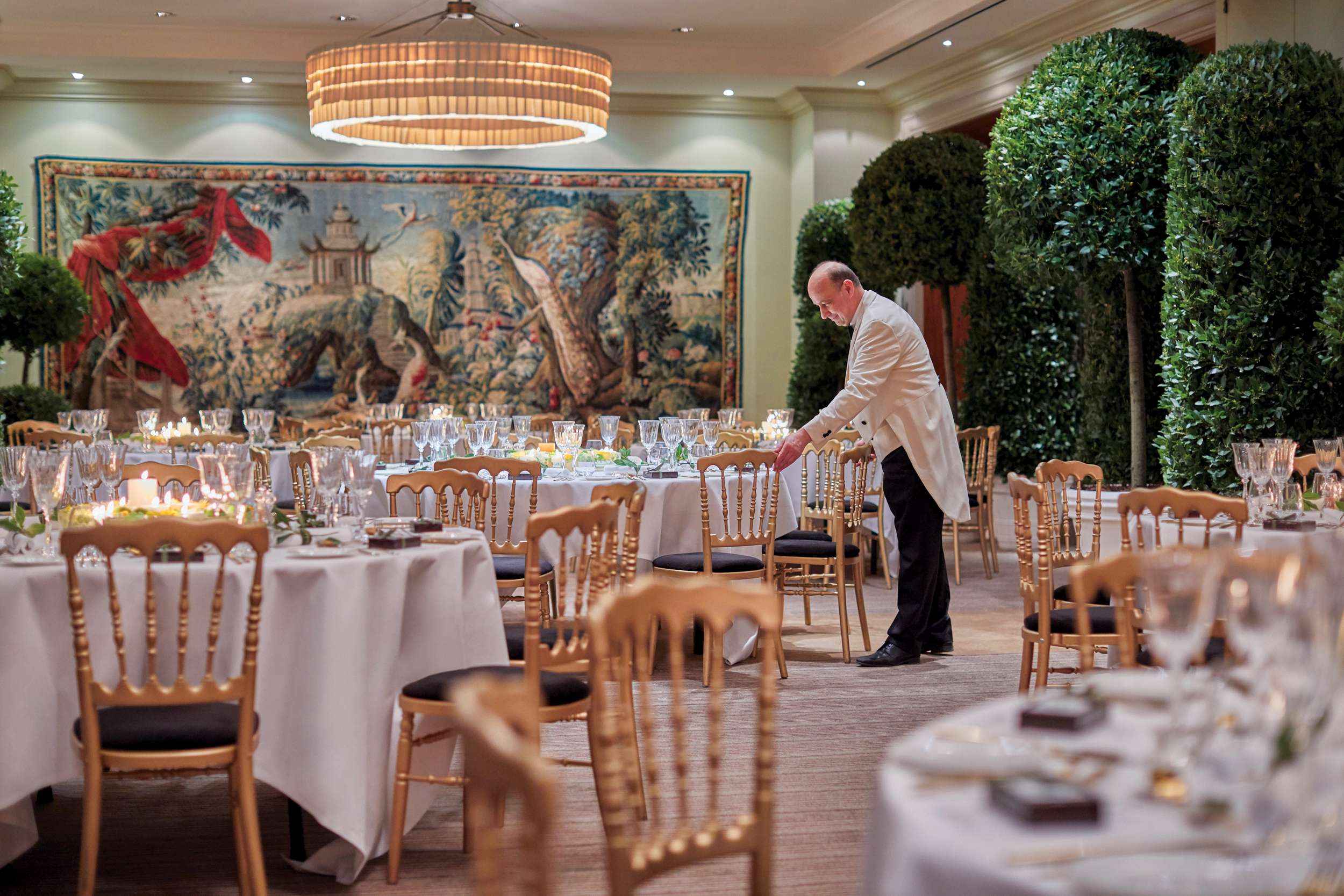 I stayed there for the Brussels Art Fair and what I liked about it was that it was a hotel that catered for the top dealers, exhibitors and journalists – as well as politicians, and some flaneur locals. The “Amigo” name comes from its city nickname when the hotel was a 16th-century prison, when Belgium was part of the Spanish Netherlands.

Its award-winning Italian restaurant Bocconi is a nod to the Rocco Forte hotel heritage, masterminded by Fulvio Pierangelini with the head chef Igor Rosi.

I liked the Italian Red Cow Parmesan, shaved thickly and served with seared, delicately tender slices of beef from Belgium’s famous Atelier Dierendonck, with fresh rocket and a slick of grassy-green, cold-pressed, extra-virgin olive oil from the Rocco Forte Verdura Resort in Sicily.

The hotel is an eclectic mix of traditional and contemporary – Italian-Flemish, with a bold and arresting art collection, not to mention the quality of the house chocolates. The restaurant – especially popular with EU commissioners at lunch – has discreet booths with prints and plates by Piero Fornasetti.

Or if you don’t mind being seen, you can sit – centre stage – out on the medieval cobblestoned terrace by the famous Grand Place, the St Mark’s Square of Brussels. From your hotel bedroom window, you can see the Hôtel de Ville’s spire, and if you get out binoculars you can even see the gilded figure of St Michael slaying the devil on the spire’s tip, and behind you are some of the city’s best antique shops and galleries.

The hotel has 154 bedrooms and 19 suites with the “presidential suite” being the Armand Blaton Suite (named after one of Belgium’s leading building families), with a dazzling 60 square metre roof terrace – ideal for socially-distanced VIP drinks parties. 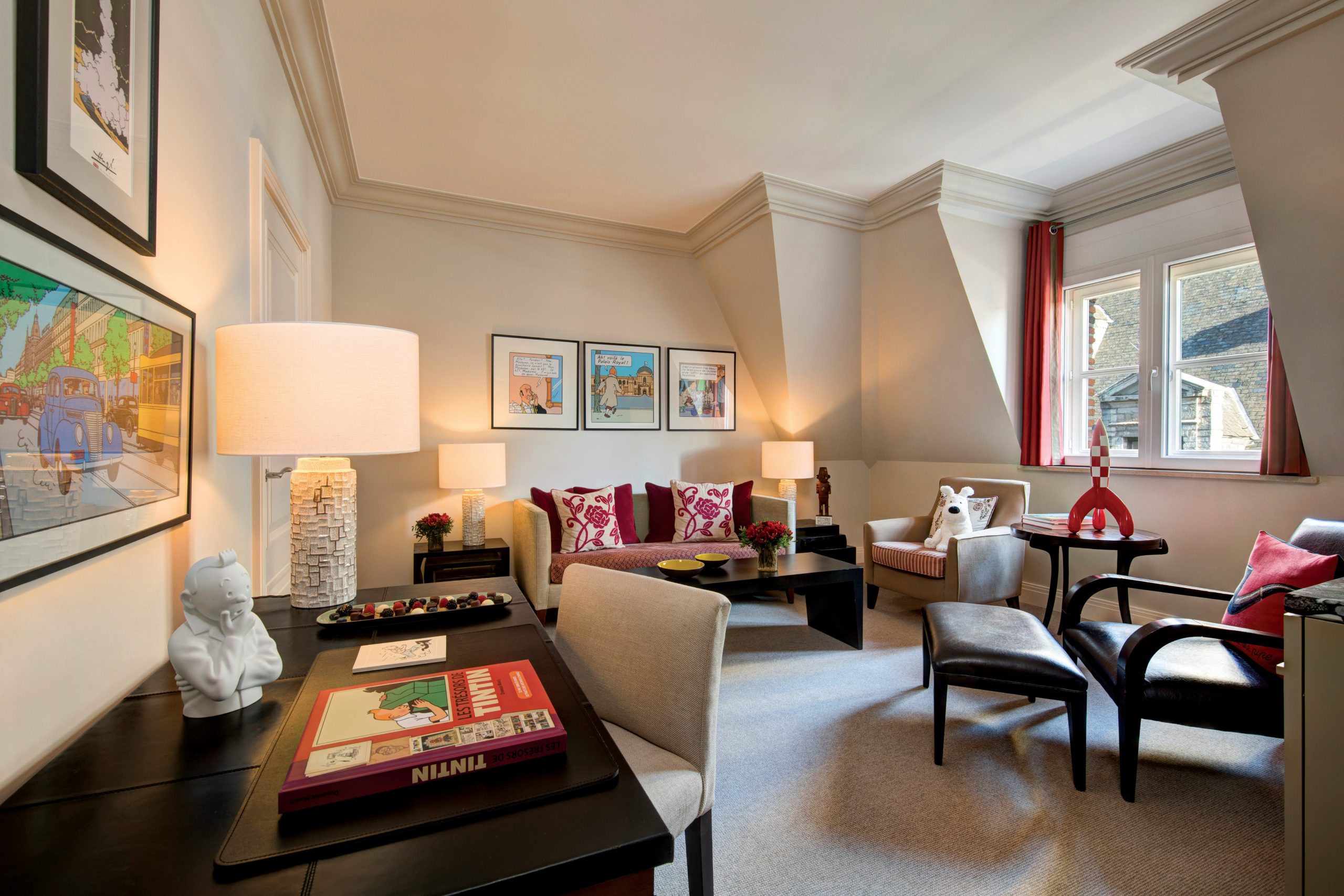 Another popular suite is the Tintin suite. The Brussels political class take their comic reading seriously. Comics are known around town as the “ninth art”. The hotel co-celebrated its 60th anniversary in 2018 with a series of Smurf-themed family packages (including Smurf costumes for children, but let’s not go there).

Designer Olga Polizzi, sister of Sir Rocco Forte, gives the hotel a decorative style that is bold and quirky – the very opposite of the Grand Ballroom of the EU’s plush restaurant VIP troughs. The attention to detail includes local artisan fittings, marble bathrooms and rooms with a distinctive Belgian touch. There is also a fitness centre, private car park with valet parking, and a 24 hour business centre – in fact, everything you can get in the EU Parliament; oh, and better still: a valet can unpack and pack your suitcase.