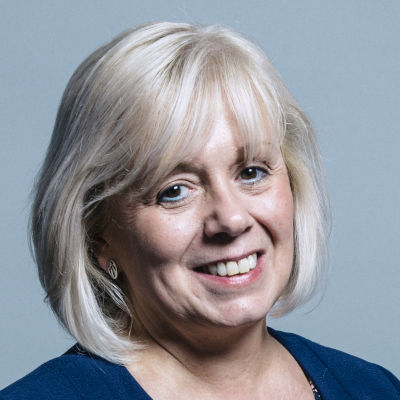 Mary Glindon’s first job was at the Child Support Agency as an administrative officer. She became a councillor on North Tyneside Council for 15 years, serving as mayor and cabinet member for health and well-being. In the Commons, Glindon joined the Environment, Food and Rural Affairs Committee and later the Housing, Communities and Local Government Committee and the Transport Committee. She was PPS to then-shadow transport secretary, Mary Creagh but later supported Owen Smith’s 2016 bid to replace Jeremy Corbyn as Labour leader. In the 2017 to 2019 parliament, she chaired APPGs on Hadrian’s Wall, the Kurdistan Region in Iraq, Muscular Dystrophy, and Parkinson’s disease. Glindon is a practising Roman Catholic and voted against same-sex marriage as well as being a member of the pro-life APPG. In 2019, she warned that the effect of her party backing a second referendum would be “toxic to our bedrock Labour voters.” Glindon is on the Northern Powerhouse APPG and was elected to chair the APPG on obesity in 2020, previously having chaired the APPG on body image. She is a member of Labour Friends of Israel. In 2020, Glindon backed Keir Starmer for the Labour leadership.