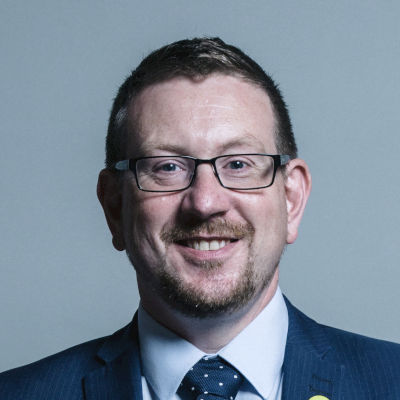 Member of Parliament for Denton and Reddish
6175
Majority

In 1996, Andrew Gwynne became a councillor aged just 21. In 2005, he became the youngest Labour MP, aged 30. As an MP, he joined the Procedure Committee, which he sat on for five years. He served as an assistant to the criminal justice minister and then to home secretary Jacqui Smith from 2007 to 2009. In 2010, he introduced the Debt Relief (Developing Countries) Act to restrict the activities of vulture funds. After Ed Miliband became Labour leader, he became shadow transport minister and later shadow minister for health. In 2016, he was promoted to shadow minister without portfolio, becoming the spokesperson for the shadow cabinet in media appearances. Gwynne became Labour’s campaigns and elections chair ahead of the 2017 general election, and later became shadow communities secretary and Labour’s co-national campaign coordinator. The campaign got personal: Boris Johnson described Gwynne as a “big girl’s blouse” live on Sky News and Gwynne deemed Johnson a “pillock” over his Brexit policy. Gwynne is a member of Unite, the Co-operative Party and Christians on the Left. He backed Keir Starmer for the Labour leadership in 2020. A Greater Manchester MP, Gwynne has criticised the government’s response to the coronavirus pandemic as unfair to Northern regions. He told Sky News in November 2020: “I will never understand the logic of a tiering system that says it’s okay for many thousands to cram into a busy shopping centre in the run-up to Christmas, but small numbers from the same household are unable to sit responsibly at a table for a meal and a drink.”

The rise of China.

Are you currently working local or national charities or pressure groups?

I’m a big supporter of the WASPI women, the women born in the 1950s who were impacted by two changes to the state pension age.