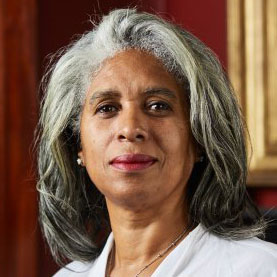 Blondel Cluff was appointed chair of the National Lottery Community Fund in 2021. Previously known as the Big Lottery Fund, the NLCF was renamed in 2019 to reflect the central focus on supporting communities. This is a priority that Cluff shares; she believes “communities are the very lifeblood of a nation”. The NLCF provides support to people and communities that are most in need; over 80% of its funds go to voluntary and community organisations. It also makes grants to statutory bodies, local authorities and social enterprises. As chair, Cluff brings with her a diverse career spent in law, diplomacy and design; she is a solicitor by training, a former diplomat, a jewellery maker (she received a CBE for services to numismatic design) and a regular public speaker on heritage. She is also a major public influence on issues of race and ethnicity; she has published various works on the Carribean and is a co-opted member of the Commission on Race and Ethnic Disparities. In March 2021, she described it as an honour to take up her role “at such an important time for us all”.