Biden, Putin, and the Danger of Shaking Hands

At the Geneva Summit, the American President ignored warnings not to shake his Russian counterpart’s hand. In doing so, he reflected a wider trend in which the West shuts its eyes to Russian aggressions, blocking out decades of sound advice coming from Eastern and Central Europe. 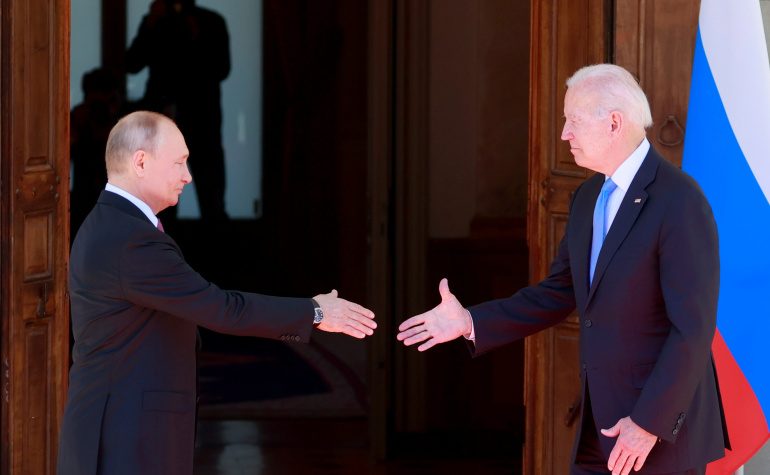 Over the course of the last year, people have been discouraged from shaking hands. Public health authorities have warned that the ancient gesture, which is supposed to demonstrate that two individuals are unarmed when they approach each other, have discouraged people on the basis that it bears a risk of transmitting the Coronavirus pathogen.

Ahead of his meeting with Russian President Vladimir Putin, Joe Biden was given a different warning about shaking hands – that it would be a sign of acceptance of the status quo. The warning came from none other than Mikhail Khodorkovsky – the Russian businessman who has been living in exile in the west for the last decade.

In a widely-shared Twitter thread, Mr Khodorkovsky warned that unless President Biden set out clear boundaries in the negotiations, there would be severe consequences for the West. “Failing to do so would maintain the status quo of handshake politics, serving just to soothe Putin’s ego.”

The warning, unfortunately, fell on mostly deaf ears. The Summit in Geneva went ahead – with Biden and Putin shaking hands, and without the United States making any real headway in breaking the stalemate between the two powers. Where Biden did take advice, however, was in not holding a joint press conference with the Russian despot – but Putin used this as an excuse to blame the West for being unreliable partners.

The fear now is that the status quo will endure: that Russia will continue to carry on uncontained, sowing chaos across the region. On 23rd June, only a week after the meeting, the Russian military was back to its old tricks – claiming to have fired a warning shot at HMS Defender in the Black Sea.

The British Ministry of Defence claimed not to have noticed the warning shots, which they believed to have been part of a military exercise being carried out in illegally occupied Crimea. The Russian military, however, claimed to have shadowed the Type 42 destroyer as it travelled through their occupied waters on its way from Odessa to Georgia.

The incident simply serves to highlight that the Russian regime is continuing to test the West – pushing them to see how far they can go. Earlier in the year, as Russian forces gathered on the frontiers with Ukraine, the West failed to offer a decisive response. By the end of April, the Russian Ministry of Defence claimed that the “exercises” on the border were over and that troops were being sent home.

While the West took Russia at face value and breathed a collective sigh of relief, they – for the most part – failed to notice that of the 100,000 troops involved in the exercise, most had remained in the area, having been rebased to the ‘Southern Military Region’. Whilst they were no longer on the border, they continue to be in striking distance of Ukraine.

Concern over a resurgent Russia extends well beyond the physical military aspects of the regime’s recent actions. The extension of Russian soft power in Western Europe should have been a topic high on the agenda during the Geneva Summit – in particular, the impact that Nord Stream II has had on weakening EU policy.

Early on in the Biden administration, there had been some hope that a series of sanctions imposed by the Americans against European companies involved in the Nord Stream II pipeline might signal the end of the project. Instead, the Americans backed down – giving the German establishment the chance to push ahead.

A key driving force behind the project, which many analysts believe has resulted in Germany softening its position on Russia, is the cronyism that has gone into lobbying for the project. Former German Chancellor Gerhard Schröder was appointed Chairman of Nord Stream, and of energy company Rosneft. Schröder had long been a proponent of closer relations with Russia during his time as leader of Germany.

Another recent employee of Rosneft is former Austrian Foreign Minister Karin Kneissl – who danced with Vladimir Putin at her wedding in 2018. Although an independent whilst in office, she maintains close ties to the Austrian Freedom Party and had previously been a member of the conservative ÖVP.

At the same time, former French Prime Minister Francois Fillion was nominated to the board of Zarubezhneft – another Russian state-run oil and gas company.

With this in mind, it is easy to understand two things – firstly why the project is going ahead despite criticism from Central-Eastern European governments. And secondly why those nations are concerned in the first place.

The call by Macron and Merkel on the 23rd June for an EU-Russia summit only further inflamed Eastern European distrust of those in Western Europe. For them, it’s clear that they have either been infiltrated with agents of Russian influence, or they simply have not lived the experience of Russian aggression.

In the last few months, more and more examples of Russian aggression in the region have come to the forefront with little to no repercussions from the West. From the revelations that Russia was behind the bombing of military facilities in the Czech Republic in 2014, to the massive cyberattack launched against the Polish government in September 2020.

The naivety of Western leaders, and their failure to listen to the governments of Central-Eastern Europe, and to the advice of dissidents who have fled Russia, shows a historic level of ignorance. The failure of the West to stand unified and hold the line against Russia increasingly looks like the policy of appeasement that was adopted by similarly weak governments in the 1930’s in the build-up to the Second World War.

The west needs to start heeding the warnings of figures like Bill Browder, Mikhail Khodorkovsky, Gary Kasparov, Sviatlana Tsikhanouskaya, Alexei Navalny and many others who have spent the last decades warning about the threat that Putin and his mafia states pose us in the West. None of them has so far been wrong, and to continue to ignore them is to do so at our own peril.