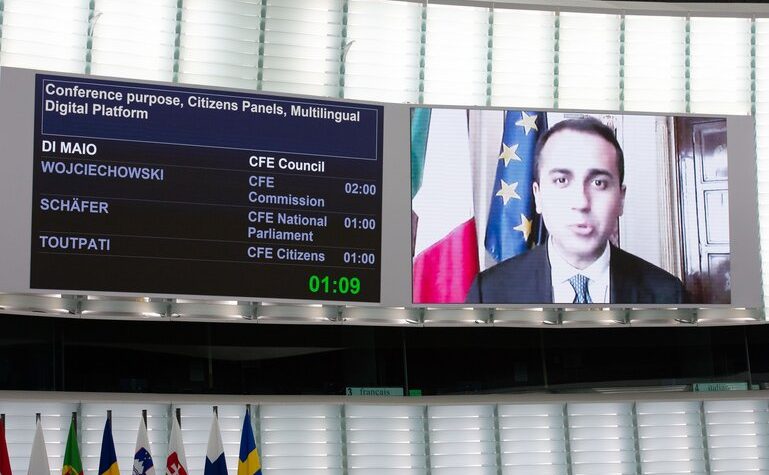 Luigi Di Maio speaking at the Conference on the Future of Europe. © European Union 2021 - Source : EP

In late September the EU’s High Representative, Josep Borrell met with the Gulf Co-operation Council (GCC), where he reiterated that the EU will appoint a Special Representative to the Gulf region. The filling of the position was expected by the end of the year and Borrell is close to a decision on the candidate selection. Borrell, had previously announced the appointment of a special envoy in February. He highlighted at the time that Europe was the first investor and second trade partner with the Gulf.

The EU Special Representatives promote the EU’s policies and interests in specific regions and countries and play an active role in efforts to consolidate peace, stability and the rule of law. With this in mind, the representative to the Gulf will play an important role in the development of a stronger and more effective EU Foreign and Security Policy and in the Union’s efforts to become a more effective, more coherent and more capable actor on the world stage. The selected candidate will provide the EU with an active political presence in key countries and regions, acting as a “voice” and “face” for the EU and its policies.

Candidacies have been narrowed down and the front-runners are Italian Luigi Di Maio, the former Foreign Minister who was the leader of the anti-establishment Five Star Movement, Greek Dimitris Avramopoulos, the former European Commissioner for Migration who has also served as Minister four times in Greece, including as Minister of Foreign Affairs, Minister of Defense, Cypriot Markos Kyprianou, who has served as Minister of Foreign Affairs and European Commissioner for Health, and Slovakian Jan Kubis,, who also has a long diplomatic career. From 1993 to today he has held the positions of UN ambassador to Geneva, OSCE secretary general in Europe, EU representative in Central Asia, foreign minister, UN special representative in order in Afghanistan, Iraq and Lebanon, and United Nations special envoy to Libya.

Expectedly, the nominations for this post come with significant political gravitas, and the pressure to Borrell is high. The selected candidate needs to be capable of making progress and negotiate in a region where political decorum and relationships are paramount. Interestingly, while Avramopoulos’ and Kyprianou’s candidacies are government backed, Di Maio is not finding the same support in Italy with his candidacy, with Foreign Minister Antonio Tajani stating on RAI that Luigi Di Maio is not the Italian Government’s candidate for this position. The final choice, Tajani said, belongs to Borrell and the opinion of this services is not binding.

Despite the fact, the pressures is on as Borrell has been recommended by his services that Di Maio is the preferred candidate – something which is has caused significant reactions around Europe, and interestingly least so in Brussels. To date only one of the leading specialized EU media outlets has mentioned the issue at all.

Di Maio’s candidacy is highly problematic for the region, especially with the UAE and Saudi Arabia because he blocked the sale of missiles to the two countries as Foreign Minister of Italy in January of last year – an issue which would alone would put the EU on a back foot. Beyond this, EU capitals have already started to sound alarm bells for the nomination. Beyond numerous dissenting voices in Italy, echoes in French corridors also note that Di Maio was a supporter of the ‘Gilets Jaunes’ protesters movement; “Don’t relent,” he urged protesters in January of 2019. Lega MEP, Paolo Borchia, has characterized the news of the recommendation of Di Maio’s candidacy as inconceivable, and has asked Borrell for an explanation on what grounds Di Maio’s resume can be considered appropriate – labelling him as a candidate whose suitability is in danger of being zero.