We can force Putin pay for Ukraine’s reconstruction

The New Lines Institute, a leading US Foreign Policy think tank, presented at the roundtable event the framework by which Russian funds already frozen by several Western Nations can be lawfully used to compensate Ukraine.

An international team of legal experts, economists and scholars presented Wednesday the first fully-formed multilateral action model on reparations through which Russian assets can be demanded and seized to fund the reconstruction of the Ukrainian state.

Natalie Elphicke MP, who chaired the discussions, highlighted the USD $300bn in damages to Ukraine, including infrastructure, schools, homes, as well as the physical, mental and social wellbeing of Ukrainians. It is a sum expected to rise well beyond USD $500bn before the war ends.

It comes in the same week that European leaders called for a “Marshall Plan for Ukraine”, seeking to replicate the scale and historical significance of the post-war US economic aid programme to Western Europe. These efforts reflect increasing attention being paid by Ukraine and its Western supporters to the future reconstruction efforts.

The New Lines Model follows the precedents set by the the post-war Paris Agreement on Reparation of 1946 and the actions of the 1990 Kuwait Compensation Fund and UN Compensation Commission (UNCC), which used Iraqi oil revenues to compensate Kuwaiti claimants USD $52bn over 30 years.

Dr Azeem Ibrahim OBE, Research Professor at the Strategic Studies Institute and Director at the New Lines Institute, drew attention to the USD $300bn in frozen assets of the Russian Central Bank, and the potential to place a charge on Russian oil and gas revenues.

Dr Ibrahim further discussed the over $2tn in estimated hidden capital which has been flowing out of Russia. Revenues from oil sales are most often moved by kleptocrats to Western accounts, not left in Russia where they might be taken if one falls out of the state’s good graces. Though the seizure of private property will be more complex, there remains scope in the model to fully compensate Ukraine for the damage done.

The roundtable also discussed the priorities that the Ukrainian people should keep when setting about the reconstruction of their country. Brooks Newmark, former MP and Minister for Civil Society, and perhaps the foremost UK benefactor of Ukrainian refugees, argued that it must be up to Ukraine to self-determine their recovery plan. Efforts can be made to rebuild the country based on its new identity, as opposed to merely fixing what has been destroyed. Anne Marie Travelyan MP, UK Transport Secretary and former Trade Secretary, reiterated that Ukraine wish to be an “intelligent, discerning customer”, not a passive recipient of Western aid. 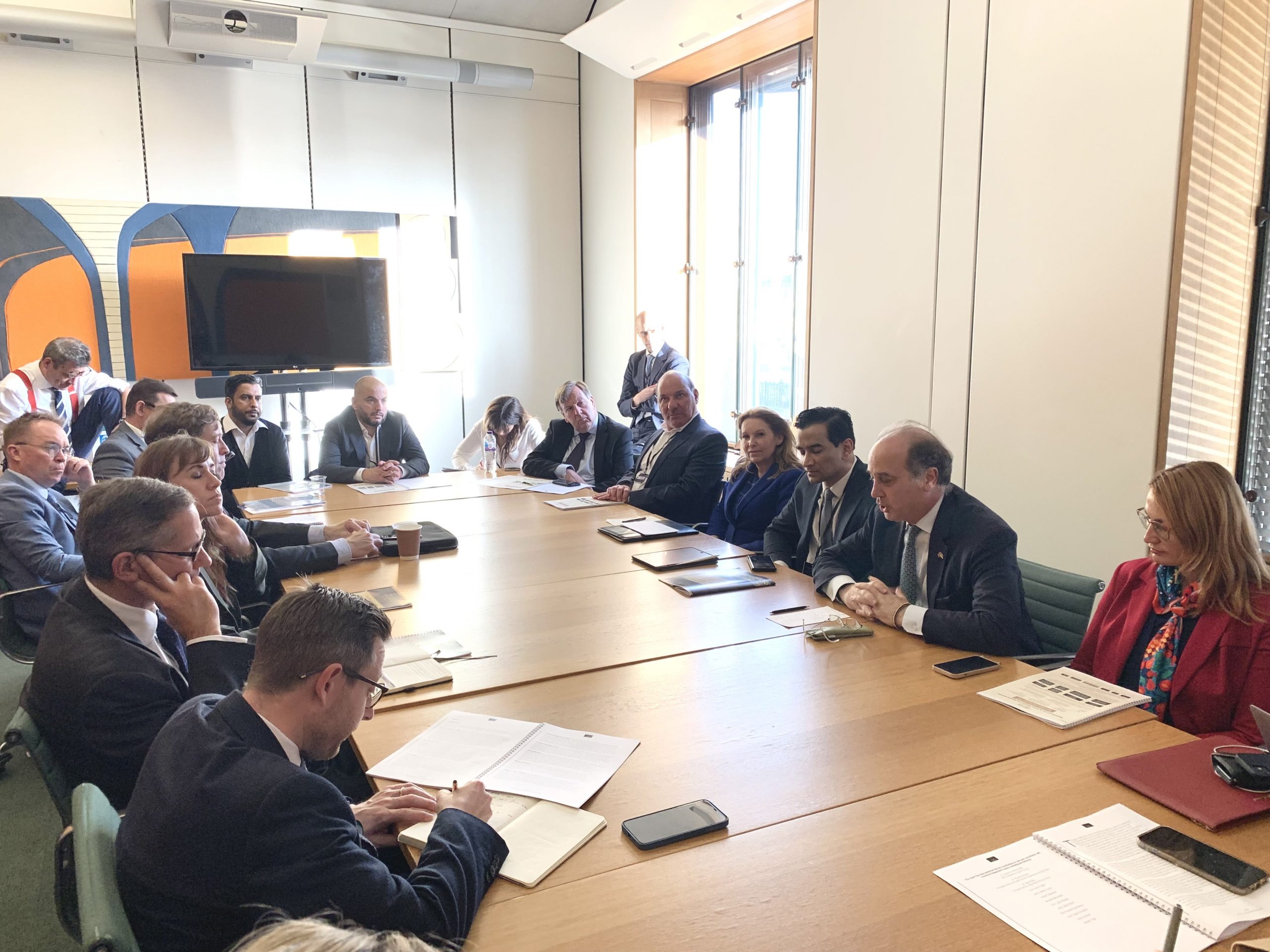 Olha Stefanyshyna who is a Ukrainian Vice Prime Minister for European and Euro-Atlantic Integration and member of the healthcare committee, spoke movingly at the roundtable for the plight of her nation. She is one of the tens of thousands of Ukrainian women who have lost their husbands to the Russian invasion, and reported the horrors of Iranian drones which stalk and terrorize Ukrainian civilians from the sky. “No matter how strong you are”, she spoke, “there is no way to tolerate it.” After a short pause, Olha focused every mind in the room, “No amount of money will bring him back”.

The emotional and mental trauma which millions in Ukraine continue to experience must be central to the reconstruction efforts in Ukraine. Alysha Tagert, a therapist and trauma expert, argued that “as policymakers, advocates, and professionals, we need to consider the survivors’ state of mind, central to the post-war reconstruction process.” The invisible wounds left by the trauma of war can be debilitating to a population that is attempting to rebuild.Damage to the mental and psychosocial health of Ukrainians ought to be considered alongside damage to Ukraine’s physical infrastructure when reparations are demanded. Roadmaps should therefore be put in place to build survivor-focused organisations, and instantaneous solutions can be funded in the form of “toolboxes” which provide stress relief in the form of everyday items such as chewing gum, stress balls or fidget spinners. A model for reparations, and the knowledge of funding for the future, is a prerequisite for Ukraine to build the mental health system it needs.

The roundtable concludes with this renewed focus on the importance of securing reparations. Olena Solnyk highlighted the 38,000 pieces of critical infrastructure, including roads, schools, water supplies, electric utilities, bridges and hospitals destroyed by Russian bombing. As well as securing funding for this reconstruction, and more, the New Lines Multilateral Action model would also act as a deterrent for future acts of aggression of this kind. Rogue states, and their leaders, will know that legal frameworks are now in place to make them pay for the damage they wrought.

The roundtable achieved considerable consensus on the challenges facing Ukraine, but most importantly highlighted the need to plan for the eventual peace.