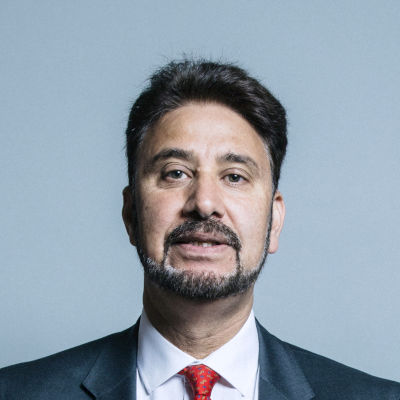 Born in Pakistan, Afzal Khan came to the UK aged 11. He became a Greater Manchester Police constable and later qualified as a lawyer becoming a partner at Mellor & Jackson. Khan was elected a councillor in 2000, during which time he was also a member of the DfTI’s ethnic minority business forum. He was appointed as Lord Mayor of Manchester and executive member for children’s services. In 2010, Khan was given a CBE for work relating to race relations. In 2014, Khan became an MEP and was appointed by the Progressive Alliance of Socialists and Democrats as special representative to Muslim communities. He became chair of the APPG on Britain-Pakistan Trade and Tourism. He is a member of Labour Friends of Palestine and the Middle East and is co-founder of the Muslim Jewish Forum of Greater Manchester. In 2019, he said he was “mortified” for having inadvertently shared an anti-Semitic Facebook post in 2017. Khan was shadow immigration minister from 2017 to 2020, then briefly shadow minister for South Asia, Africa and the Commonwealth. In 2020, he was appointed shadow deputy leader of the Commons.