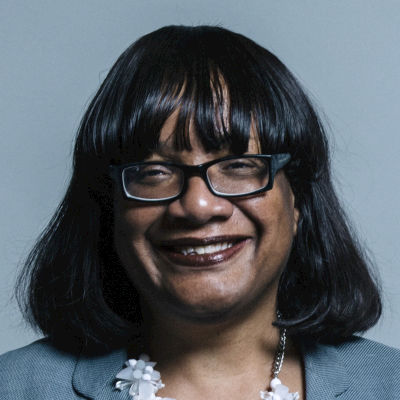 Member of Parliament for Hackney North and Stoke Newington
33188
Majority

Known as a close friend (and former partner) of Jeremy Corbyn, Diane Abbott was the first black woman to be elected an MP in 1987. A member of the Socialist Campaign group of Labour MPs, Abbott was highly critical of New Labour. Gaining recognition as shadow minister (for public health, international development and the home office consecutively) under Miliband and then Corbyn, her influence in the Labour Party has waned since the election of Keir Starmer as leader. However, Abbott continues to be a regular figure in the media, often dividing opinion due to her unflinching support of Corbyn and left-wing stances. Criticism was levied at Abbott after she denounced private schools, yet sent her son to one. In November 2020, Abbott appeared alongside a China human rights denier, whom she failed to challenge until a day after the event. Abbott has been the target of a torrent of online abuse: Amnesty International found that during the 2017 election campaign, almost half of all abusive tweets directed at women MPs were about Abbott. In 2020, she refused an invitation to the programme Strictly Come Dancing, preferring to focus on politics and activism.