The government have been totally outgunned on social media, says Rosa Herxheimer 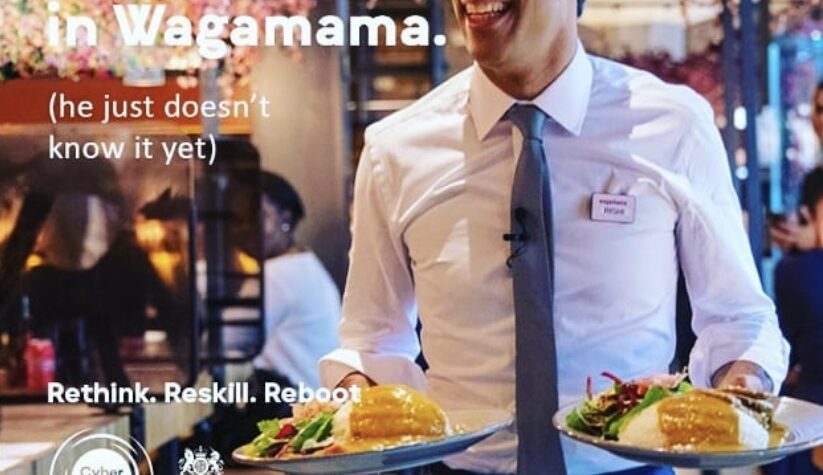 A ballerina should retrain in cyber. What were they thinking? The government’s latest jaunt onto social media came a few days after chancellor, Rishi Sunak, suggested that those in the arts should pivot to other areas of employment. ITV News Politics tweeted the headline, “@RishiSunak suggests musicians and others in the arts should retrain and find other jobs” alongside a link to their interview with the Sunak.

The quote caused uproar from mainstream and fringe creatives alike, and both the chancellor and ITV had to issue a clarification of his comments, which started with a discussion about the cultural sector, but concluded with the vague statement, “as in all walks of life, everyone is having to adapt.” 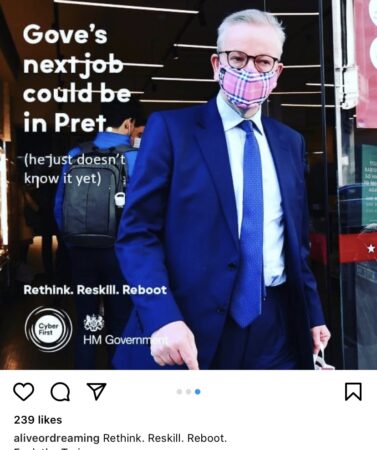 Although there was backlash after this first comment – it was incomparable to the nationwide despair caused by the government advert. A soft photograph of a ballerina tying her shoes was overlaid with the text, “Fatima’s next job could be in cyber. (she just doesn’t know it yet)”, followed by the slogan, “Rethink. Reskill. Reboot”.

Op-Eds boomed alongside Instagram stories as quick-witted creatives proved their worth.

Stars leapt to defend their industries –From Gary Lineker (“Good Heavens” and a head-in-hands emoji), to Fatboy Slim – “This is unbelievable. The government is throwing the arts under a bus. #Fatima” – to Caitlin Moran, Lily Allen, and Liam Gallagher.

Op-Eds boomed alongside Instagram stories as quick-witted creatives proved their worth. The widespread criticism soon translated into widespread recognition – the advert becoming a piece of national consciousness in the same vein as the Cadbury eyebrows advert, or the Meerkats from Compare the Market. 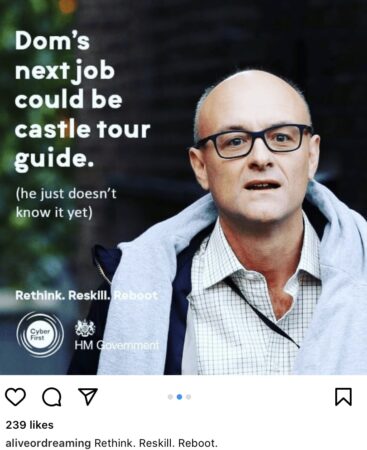 And with that level of recognition, came the vast opportunity to meme. Memes in response to the government advert began with photographs of high-profile cultural figures such as Anna Wintour and Nigella Lawson. A photograph of Anna Wintour sitting at a glassy desk has text written on top that reads, “Anna’s next job could be in waste disposal. (she just doesn’t know it yet). Rethink. Reskill. Reboot.” And then became memes for government – “Rishi’s next job could be in Wagamama”, for example.

As well as creating a sense of national unity reminiscent of the early days of lockdown – the memes of the advert becoming as familiar as clapping on ones’ doorstep, posting about banana bread, or watching Tiger King – the advert led to real a reflection on what arts and culture policy currently looks like.

“To those tweeting re #Fatima / This is not something from @DCMS & I agree it was crass”, said Oliver Dowden

In mere hours, Oliver Dowden – Secretary of State for Digital, Culture, Media and Sport (DCMS) – was sharing his opposition to the advert: “To those tweeting re #Fatima / This is not something from @DCMS & I agree it was crass / This was a partner campaign encouraging people from all walks of life to think about a career in cyber security / I want to save jobs in the arts which is why we are investing £1.57bn”.

Later that day, the Culture Recovery Fund was launched, alongside the hashtag, #HereForCulture. Sunak posted a twitter thread detailing sectors of the arts that the government was supporting while Dowden’s own profile became flooded with content as he retweeted organisations thanking DCMS for the fund. This got slightly sticky when it was revealed that organisations had been told they had to post #HereForCulture and its logo – which features HM Government branding – in order to receive funding.

Dowden states that “it is perfectly reasonable that organisations receiving money from the Culture Recovery Fund were asked to publicly accredit the government funding and alert local media.” I am yet to see a meme of either Dowden’s quote, or the #HereForCulture branding which suggests he may be in the clear on that one.