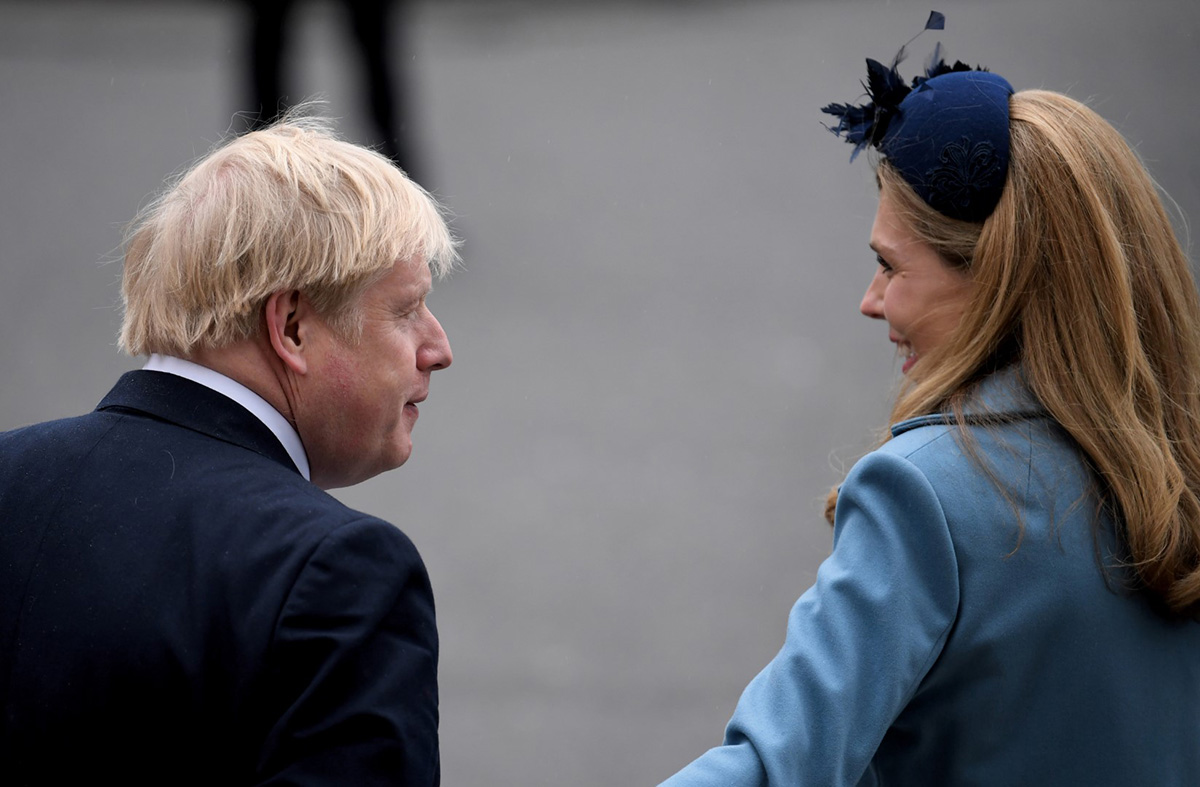 Behind every successful man there is a woman – and behind every unsuccessful man, there are two,” Mark Twain once wrote. He may have been joking but it has never been truer that strong monogamous alliances breed stratospheric success, especially in Westminster. Upcoming contenders for high-flying careers in this world must note: the secret to a power coupling consists of selecting very carefully – and hanging on to for dear life – a power spouse. In moments of doubt, the young and ambitious should ask themselves: Who in all honesty would have heard of Hillary if her surname had not been Clinton?

“The Westminster bubble is small and quite hermetic,” explains Marie Le Conte, author of Haven’t You Heard: Gossip, Politics and Power. “Whether you’re a journalist, adviser or politician, you will be working very long hours in a space the size of a small village. The line between professional and personal becomes a blurry one after drinks in Strangers’.”

Boris Johnson and Carrie Symonds, Michael Gove and Sarah Vine, Dominic Cummings and Mary Wakefield – these are the couples of the moment. But the phenomenon doesn’t begin and end there. It also comprises those who’ve taken a topple from the top of the tree, such as Ed Balls and Yvette Cooper, who had his and hers parliamentary seats before the right honourable member for Normanton was kicked out by the electorate and had to reinvent himself as a ballroom dancer.

Neil and Glenys Kinnock’s son Stephen was, at one point, first gentleman of Denmark thanks to Helle Thorning-Schmidt. And while the Brexit Party may frown on political unions, that’s not stopped Richard Tice and Isabel Oakeshott. Some prefer to operate as unobtrusively as possible. Munira Mirza, the PM’s director of policy, and her husband, Tory fixer Dougie Smith, are “a powerful and discreet axis of power”, in the words of Tim Shipman. “Dougie knows where most of the bodies are buried. He still owns the spade.”

Boris and Carrie are the exception that momentarily proves the rule. For they aren’t so much a power couple as a political threesome. Rumours swirl as to the true state of their relationship but its public image is carefully laundered through whichever newspaper is clever enough to employ Carrie’s ex-boyfriend, Harry Cole. While keeping her own ex-lover on speed dial is perfectly all right, a source tells me the PM’s baby mama has culled his old amores from WhatsApp. In terms of power partners, Symonds is certainly a downgrade from Marina Wheeler, the high-powered QC whose influence became evident when she attacked the European Court of Justice in the pages of The Spectator in 2016. Carrie may influence his thoughts on the oceans but the stress of dealing with Covid-19 and his constrained finances have left “misery etched on his face”, according to insiders.

Long-time Tory observer Iain Dale reckons that power couples today operate differently both from those of the past. Neil and Christine Hamilton, for instance, always struck him as one entity, much as Trump and Melania do now. “I don’t think anyone could run for president if the wife didn’t come as a package,” argues the author of Why Can’t We All Just Get Along… “Bill and Hillary are obviously the ultimate power couple.” But, nowadays, in Britain at least, since we know what the women think, this makes them seem much more separate from their spouses. “Cherie was obviously intensely political and had to almost restrain herself,” Dale adds.

There are three people in Gove and Vine’s marriage too, if you count the editor of the Daily Mail. It was Paul Dacre, late of that parish, who hired her, shortly after running an article entitled: “Oh Minister, what toe-curling secrets will your wife reveal about you next? His terrible driving. His love of scented baths. Is there ANYTHING writer Sarah Vine won’t disclose about life with Britain’s Education Secretary?” Vine is certainly an individual in her own right. She brings home the bacon and she’s value for money. While her husband flip-flopped over face masks, his Westminster WAG was formidable. “We all have to die sooner or later,” she tweeted, setting his name trending. “If I get Covid and cop it, so be it. My time has come. I’ll have had a good life, better than most in this world at any rate. I certainly don’t expect the entire nation to bankrupt itself to save my sorry ass.”

When it comes to assessing who is most likely to enjoy a meteoric rise among the politically ambitious, it’s best to remember Stalin’s old saw: “If you want to get to know a person, find out what they read.” Turns out it’s far more efficient to establish who they’re sleeping with.

With this in mind, it seems the future of our politics is set to be dominated by the following romantic pairings…

One wonders if Carrie Symonds took inspiration from her noughties namesake, Carrie Bradshaw, when choosing a partner – Boris Johnson is surely Westminster’s answer to Mr Big. A tale as old as time, the couple met when Symonds was a government adviser and Johnson was married. Johnson’s high-profile philandering seems a minor blip compared to some of the hurdles they have overcome this year: their famous row at her Camberwell flat, moving to Number 10, a puppy, a Conservative majority, announcement of their engagement, a spell in intensive care, and a baby. Although Symonds no longer holds the adviser job title, she clearly remains one of Johnson’s closest influencers. Expect more weight loss, climate caring and puppy cuddling under her watchful eye.

Controversy is often at a fever pitch when Munira Mirza and Dougie Smith are involved. Mirza is the director of the Number 10 policy unit and in June this year was appointed head of the race equality commission – a divisive choice considering her dismissal of the anti-racism movement. Smith, Mirza’s husband, is a strategist and opposition researcher in Johnson’s most senior political office. He also happens to be the co-founder of Fever parties, a London-based organisation that hosts “five-star” orgies in the townhouses of Kensington, Chelsea and Mayfair. Smith appears to be ardent in the belief that all publicity is good publicity as multiple articles describing his straddling of two very different parties fill up the media page of the Fever website.

Right For Each Other

Someone named Bernard crops up in almost every one of Richard Curtis’ films or TV shows. Furthermore, the Bernard is often the butt of a joke. It is common knowledge (and now well-reported) that this namechecking is a dig at Bernard Jenkin, MP for Harwich and North Essex, and, since May 2020, chair of the liaison committee. Jenkin’s wife Anne was Curtis’ girlfriend while they were at university, and Jenkin (by Curtis’ interpretation) stole her off him after they met at the 1984 Conservative Party conference. Anne Jenkin says that if one studies her and Bernard’s wedding video, “you will see Richard in the background making notes”. Anne ran as an MP in 1987 and lost, while Bernard was elected to the House of Commons in 1992. In 2005, Anne co-founded Women2Win with Theresa May, a pressure group within the Conservative Party that promotes the election of female Conservative MPs. Anne has sat on the Conservative benches of the Lords since 2011, so we can expect Curtis’ magnum opus to be set within the four walls of parliament.

Angela Eagle (MP for Wallasey since 1992) was the second openly lesbian MP. She met her civil partner, Maria Exall, at the Peckham Labour Party. Exall is a Branch Secretary at the Communications Workers’ Union and a member of the Labour National Committee. When Eagle announced a leadership challenge to Jeremy Corbyn in 2016, newspapers reported on it being a surprising move considering Exall’s support for Corbyn. Upon his 2015 victory, Exall described Corbyn’s leadership as “a massive opportunity to push forward socialist ideas in Britain”. This incident appears to be nothing but a blip in the labour of love that is Eagle and Exall. Exall is actively supportive of her partner on social media, and in 2019, both Eagle and Exall were members of a panel at the Labour Party conference titled “Defending LGBT+ Rights in an era of populism”.

Claire Maugham Director of external affairs, Houses of Parliament Restoration and Renewal
❤ Jolyon Maugham Founder and director of The Good Law Project through which he has brought to court a number of challenges to the Brexit process

If diamond engagement rings brandished on Instagram are the highest form of love among reality stars, retweets of astute observations are the peak display of adoration between Westminster’s young lovers. Lizzie Loudon, former special adviser to Theresa May and former chief of staff and director of communications to Rory Stewart, often retweets her boyfriend Will Tanner’s political analysis. Tanner is director of Onward, an independent think tank that supports mainstream conservatism with the aim to renew the centre-right for the next generation. Tanner and Loudon crossed over as advisors in Theresa May’s office, both departing in 2017. If romance can blossom there, there is hope for every lonesome singleton in Britain.

Sebastian Payne, Whitehall correspondent for the Financial Times, is well-known for hosting Payne’s Politics (formerly FT Politics) where for four years he and a line-up of top commentators have had weekly discussions and debates over the most recent British political events. Payne married Sophia Gaston in Italy last year. Gaston is managing director of the British Foreign Policy Group, a think tank dedicated to advancing the UK’s global influence. In lockdown, Gaston has been hosting Zoom webinars with expert guests discussing global relations on topics such as “America at a Crossroads”. Covid-19 seems to have encouraged Payne’s creativity – his Instagram has begun to feature black and white photographs documenting various stages of London in lockdown.

Grace Blakeley, staff writer at Tribune and host of the A World to Win podcast describes herself as a “Möet Marxist”. Her boyfriend, James Schneider (who co-founded Momentum), is more of a traditional champagne socialist. Blakeley is known for appearing on BBC News, Question Time, and Good Morning Britain and for supporting EU withdrawal. Her second book, Corona Crash, is released this autumn. Formerly public relations adviser to Jeremy Corbyn, Schneider is currently working in communications for Progressive International and can occasionally be heard as a guest on Blakeley’s podcast.

Ben Nunn Director of communications to the leader of the opposition
❤ Florence Wilkinson Writer and film maker; governor of Islington Futures;  co-founder of birdsong-recognition app Warblr

Robert Peston and Charlotte Edwardes met at a Christmas party and have been together publicly for three years. Peston, political editor at ITV News, is a household name. Edwardes is an interviewer for The Times, and as a witty columnist her relationship with Peston often features – there is frequent mention of a bed weighed down by newspapers.