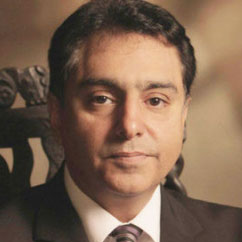 Since May 2014, Haras Rafiq has been CEO of Quilliam, which focuses on researching and discussing counter-extremism, with a particular focus on Islamism. Rafiq co-founded Crescent Radio in December 1999 and is a former CEO of Crescent Network, which included the magazine Crescent Life. Following the 7/7 attacks in London, Rafiq was appointed to the UK Government Task Force on extremism, set up by the then-Prime Minister Tony Blair. In 2006, Rafiq was involved in the founding of the Sufi Muslim Council and later became the councils executive director. He is also a co-founder and former director of Counter Extremism Consultancy, Training Research and Interventions (CENTRI). Rafiqs main area of expertise is counter-extremism, and he is a current peer mentor for the Improvement and Development Agency for Local Government on preventing extremism. He also sits as a member of the Advisory Group on Online Terrorist Propaganda based in the European Counter Terrorism Centre. Rafiq is also an advisor to the prime ministers Community Engagement Forum Taskforce and is a prominent social commentator on the issue of counter-extremism. Since 2016, Rafiq has been a trustee of the Franco-British council.