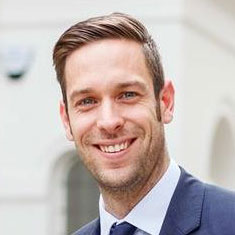 A well-placed and effective thought leader, Andy Cook has led the CSJ since December 2015. He previously co-funded and spent eight years leading an award-winning charity working with disadvantaged children across the Midlands. Cooks leadership in the voluntary sector supporting some of the most marginalised people in the UK has given him a unique voice in Westminster, ensuring he has a real understanding of the root causes of poverty and an unrivalled desire to connect the backstreets with the corridors of power. In February 2021, the CSJ published a report indicating how rough sleeping could end within three years, with Cook strongly urging the government to deliver a national Housing First programme, realising significant savings for the taxpayer and supporting thousands of the countrys most vulnerable people. Cook is a board member of Dallaglio Rugby Works and a Trustee of the Christopher Nieper Foundation. He is also an advisor to several philanthropists and industry impact awards.