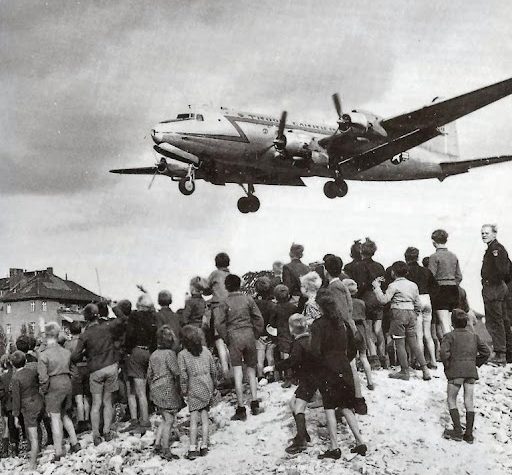 As the war in Ukraine escalates and a humanitarian crisis unfolds, we need practical solutions to help desperate people, and fast. The war aside, severe disruption to health services caused by the pandemic is now being compounded by millions of Ukrainian refugees crossing into the EU. Watching them do so reminds me of a story from the last time Europe witnessed upheaval on this scale, in the aftermath of the Second World War.

Back then, it was Berlin that was bearing the brunt of Russia’s aggressive expansionism. Its encirclement of the city posed a similarly grim dilemma for the allied democracies. How to alleviate human suffering without causing further catastrophe?

Colonel Gail Seymour Halvorsen of the United States Air Force had a novel answer. Haunted by the sight of children’s faces pressed against the barbed wire fences at the airport, he decided to drop candy and chewing gum to them, using handmade miniature parachutes.

The airlift itself averted a humanitarian disaster and kept West Berlin alive. Colonel Halvorsen became known as “the Berlin Candy Bomber”. And thanks to Halvorsen, plus the generosity of thousands of American families and candymakers, a whopping 23 tons of gum and chocolate were dropped from over 250,000 tiny parachutes.

Nor did Halvorsen stop there. Over the next 25 years, he became an advocate for children in conflict zones and performed candy drops in Bosnia-Herzegovina, Albania, Japan, Guam and Iraq. He died at 101, only one week before the Russian armed forces invaded Ukraine.

The chief dividend of Colonel Halvorsen’s ingenuity was the morale boost it delivered to little Berliners. But even in the realm of policy, simple ideas can go a long way towards solving complicated problems. Chocolate and chewing gum will not alleviate a crisis, but they do serve a wider purpose when normal public services are badly disrupted.

Particularly chewing gum. Multiple studies have shown the connection between chewing and stress relief. US mental health therapist Alysha Tagert has written in these pages that sugar free gum is an effective ‘grounding tool’, a sensory aid that should belong in a “coping tool box” for any anxious child (or adult).

There are wider health benefits too. Oral health is an integral part of general health. The oral cavity has the second largest microbiota after the gut. It is the starting point of our digestive system and harbors over 700 species of bacteria. The oral microbiome is critical to maintaining systemic health as well as oral health. In other words, cleaning the mouth keeps the body healthy.

For example, periodontitis, the bacteria-caused inflammation of the gums that can result in bleeding, can act as a gateway for bacteria to contaminate the bloodstream, potentially leading to problems such as abscesses, heart valve infections, increased risk of premature birth, and, in worse case scenarios, sepsis.

Then there’s the oral health benefits (especially if you’ve been eating chocolate). Research by the Faculty of Dentistry at King’s College London in 2019 found that people who regularly chew develop 28 per cent fewer cavities than those who do not. The equivalent percentage for using fluoride toothpastes and supplements was 24 per cent. A follow-up meta-analysis in 2022 is looking at sugar free gum’s effect on plaque quantity and showing promising results.

The NHS acknowledges the benefits of sugar-free gum in its guidance on oral health. The current President of the British Dental Association, Professor Liz Kay, is also an advocate. Gum, then, is a practical health aid. Critically at a time of crisis, it is also one that is low cost, easily accessible, and highly effective as a preventative tool.

As Professor Kay points out, tooth decay is still the most common reason for hospitalisation in 6-10 year olds. Good prevention can alleviate patient suffering, but also reduce the financial burden on health services stretched to the limit by the biggest pandemic in a century. To illustrate the point, in 2015-16 the cost to the NHS of tooth extractions in 0-19 years olds was over £50 million.

Colonel Halvorsen was motivated by a different instinct: a small act of kindness to raise the spirits of children who had nothing. But his generosity might inadvertently have had a wider benefit for the teeth of thousands of Berlin children. Solutions to problems do not have to be complicated or expensive. We will need other such solutions as the refugee crisis further stretches the resources of host countries.

Olivia Carey is a health and lifestyle journalist from London