In January 2021, as the third wave of coronavirus surged and the vaccine was still just a glimmer in a scientist’s eye, the European Commission, led by Ursula von der Leyen, unveiled the New European Bauhaus initiative. This ambitious, optimistic project aimed to promote fresh design solutions fit for a post- Covid, environmentally friendly future.

“Culture and the creative sectors are the soul of Europe,” commissioner Mariya Gabriel, who spearheaded the project, says when asked about the timing of the launch. “They contribute to raising awareness of global challenges, enhance community cohesion and civic engagement, and promote European values. The launch couldn’t have come at a better moment.” 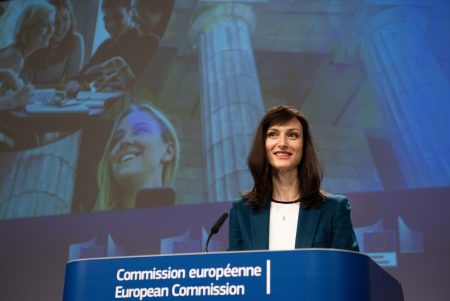 Beyond the “soul of Europe”, however, is the fact that 4.5 per cent of EU GDP is generated by the cultural sector and it employs, directly or indirectly, more than eight million Europeans.

“The arts have an extraordinary potential for the development of our regions, providing quality jobs,” she says emphatically. “Culture and media have also been our daily companions throughout lockdowns and the pandemic anxiety. At the same time, the pandemic has become a huge challenge for the sectors. We, the commission, stand fully by their side, using every means at our disposal to support the recovery of the sector and increase its competitiveness to become greener, more digital and more inclusive.”

The New European Bauhaus represents an alliance between culture and industry. It combines environmental, economic and cultural elements aimed to design “future ways of living” in a sustainable way.

“The challenges we face today are so complex and multifaceted that we will only be successful in rethinking our future if we adopt a holistic view across disciplines,” says Gabriel. The real advantage of having such a broad portfolio of work, she says, is that it brings the “knowledge triangle” – education, research and innovation – under one portfolio.

“My portfolio also includes many wonderful flagship programmes like Erasmus+, supporting education, training, youth and sport in Europe – all of these things are absolutely key to promoting a stable economy,” she adds.

The New European Bauhaus is an interdisciplinarity movement linking diverse groups including artists, architects, engineers and designers in the development of joint practices that broaden and disrupt the status quo of each field. In the words of Gabriel: “The project calls on all Europeans to imagine and build together a sustainable and inclusive future that is beautiful for our eyes, minds and souls.”

Furthermore, Gabriel says that the project doesn’t regard “culture” as a stand-alone sector, but as a porous entity capable of contributing to other areas of knowledge. “Demography, mobility, sustainability, artificial intelligence, construction – they’re all part of, and affected by, the ‘cultural sector’,” she says.

The reference to Bauhaus recognises the 100-year-old movement that transformed attitudes towards aesthetics and design, insisting on breaking down class barriers between artisans and artists, and fusing craft traditions with modern technology. The word Bauhaus is synonymous with modernism. “Simple and always functional, it represents a century of industrialisation and urbanisation; an invitation to recognise that art and culture can be a powerful trigger of transformation,” says Gabriel. “Every societal evolution has been accompanied by cultural and art movements. And Europe is on its way,” she adds.

The original Bauhaus was also a place of strong debates.

“We aim at collectively identifying the common challenges that are the most pressing ones for our societies,” says Gabriel. “We want to elaborate ad-hoc plans for action in a co-design process involving regional and local authorities, as well as citizens, taking into account the richness of our diversity when developing ad-hoc solutions.”

Central to the original Bauhaus was also the idea that there should be no borders between artists and craftspeople. Eminent painters and art theorists such as Paul Klee, Kandinsky and Johannes Itten were teaching at the Bauhaus and contributed to the idea of a “Gesamtkunstwerk”, the importance of uniting different disciplines to work together. This is exactly what the commissioners had in mind with the co- design phase of the New European Bauhaus. “The New European Bauhaus aims to be a European movement, co-designed with European citizens, to tackle our current societal challenges”, says Gabriel.

“Finally, the last innovative element of the Bauhaus – it’s very specific design, based on ‘bottom-up’ participation – should enable us to further identify areas that can contribute to accelerate the ecological transition towards sustainability, aesthetics and affordability,” she says.

The bottom-up nature of the scheme is a particular point of pride. “The fact that it involves the European citizens themselves should enable us to accelerate the transition towards our goals,” says Gabriel. “Without their active participation and support, the major transitions will not work.”

Open to all and looking to harvest the most daring ideas, the Bauhaus encourages EU citizens to think out of the box and actively involve students, musicians, architects, poets, scientists, artists, designers and the wider cultural sector, all willing to join hands in building a better future for Europe.

“We want to do it all together by creating a community that will be moving in the same direction and with the same purpose. This does not mean, however, that everyone will be doing the same thing, but rather that we will share the same common principles while valorising our cultural heritage and diversity, adapting to the local conditions,” says Gabriel.

In April, Gabriel and her team launched the very first competition for New European Bauhaus prizes to showcase innovations and ideas. They received 2,529 applications, including 905 for the “NEB rising stars” category exclusively open to young people.

“So we know that the ideas are there to make this initiative a success. Building on the inspiration of the first half of the year, this autumn we will have several new actions to keep the momentum alive.” Gabriel also plans to use other EU programmes to support what she calls the “delivery phase”.

Every societal evolution has been accompanied by cultural and arts movements

She says: “Within the Horizon Europe programme we will publish a call for proposals this autumn with a budget of €25 million [£21,400,000] for the creation of five New European Bauhaus pilot projects”, she says, explaining that they will be tailored to the local context – setting up in urban areas, in rural areas, in coastal areas, and others. “The pilot projects will become lighthouse demonstrators. They will be a valuable learning experience that future rounds of pilots can learn from,” she adds.

In July, the EU issued guidelines on the safe resumption of cultural activities in Europe. “The guidelines also look into the sectors’ recovery and access to funding remains key,” says Gabriel “The resilience,

A catalogue cover designed in 1923 by Austro-American graphic artist and Bauhaus member Herbert Bayer, created for the movement’s first public showcase cohesion and innovative potential of European societies are strongly linked to our cultural heritage, the arts and the cultural and creative industries. It’s up to us to ensure they not only survive, but also thrive.”

For more, read the extended interview with Mariya Gabriel here.