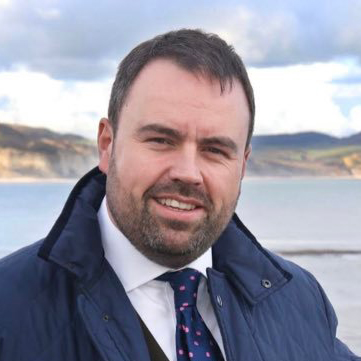 Chris Loder has strong local connections to his West Dorset constituency: born in Sherborne, he grew up on his parents’ fourth generation family farm and was educated locally. After leaving school in 1999, he began to work his way up the hierarchy of South West Trains, as a station assistant, guard, and branch line manager. After a nine year interlude working with major rail operators in London, across the UK and in Europe, Chris returned to South West Trains as Head of Service Strategy, and became closely involved in South West’s preparation for the Waterloo Upgrade programme. Politically, Loder’s interest in local affairs commenced as an 18 year old parish Clerk for Bishops Caundle. He was elected as a Conservative District Councillor from 2013 to 2015, and became chairman of West Dorset Conservatives in 2016. He has appeared in local churches as an organist and campanologist. He voted for Brexit in 2016, putting him somewhat more in tune with the Leave voting constituency than his predecessor Oliver Letwin, and has been a strong supporter of Boris Johnson.