Glasgow: the host with the most

As the Scottish city gears up to hold Cop26, John Nicolson MP tells the story of his hometown and offers tips on where to visit, drink & dine

Glasgow has been through many incarnations – sleepy medieval ecclesiastical centre, elegant Georgian merchant town, throbbing industrial powerhouse, and model city for post-industrial reinvention. So, finding ourselves in the world’s spotlight yet again – this time as the last chance saloon for climate change crisis talks – won’t phase denizens of the ancient “dear green place”, as its patron St Mungo named Glaschu in the sixth century.

In a way, it could not be more apt that Glasgow finds itself hosting the Cop26 climate emergency summit. The city was, after all, synonymous with industrial might. For most of the 19th and early 20th centuries, the once salmon-rich River Clyde ran black, as titanic city factories spewed the detritus of what seemed like a cost-free industrial miracle. Glasgow was home to textile, glass, paper, cotton and iron manufacturing on an epic scale. “Clyde built” became synonymous with quality. And our shipbuilding industry was the envy of the world with the Cutty Sark, the Comet, the Queen Mary and the QE2 floating symbols of the city’s skills and style. It was a key target for German bombers.

Glasgow grew rich and richer still. By the turn of the 20th century it was one of the wealthiest and most elegant cities in Europe. Like many towns in the British Isles, industrial pollution pushed the prosperous to the west. The sumptuous terraces of Kirklee and Downhill, Hillhead and Kelvinside stand to this day as evidence of the beauty the merchants’ riches could buy, and the skills then available; grand architectural vistas of stone carving, stained glass, mahogany panelling and intricate ironwork.

And Glasgow liked to show off. Huge international exhibitions in the Victorian and Edwardian eras demonstrated to the world what the city could build. Seven million people visited the 1888 Glasgow International Exhibition, and to celebrate, the city built the Doulton Fountain – then the largest in the world – and still standing on Glasgow Green. In 1901 Glasgow hosted yet another of its great exhibitions, showcasing what is now the Kelvingrove Art Gallery and Museum. Much loved by Glaswegians to this day, it displays some of the city’s world-class art  collection, not least Dalí’s Christ of Saint John on the Cross, and a selection of Glasgow boys including James Guthrie, John Lavery and Edward Atkinson Hornel. Fans of Charles Rennie Mackintosh won’t be
disappointed either.

The city has always had a neglectful relationship with its history. While other great European cultural centres like Barcelona built out from the core, layer upon layer, preserving predecessors’ heritage, Glasgow has been too quick to demolish its past. The 19th-century city fathers weren’t sentimental in laying waste to Glasgow’s medieval heart. The great city photographer Thomas Annan recorded in moody, atmospheric detail the wynds and closes down the High Street and round the cathedral in the 1870s before they were lost. They look remarkably familiar to anyone who knows Edinburgh’s Royal Mile. But here, the Victorians swept away the ancient brooding tenements, along with most of the elegant 17th- and 18th-century merchant mansions. Soon little was left of the place that the English spy and Robinson Crusoe author Daniel Defoe had called “the fairest for breadth and the finest built” city he’d ever visited. In an act of extraordinary vandalism even Glasgow’s “very handsome, high and august” 15th-century university was brought tumbling down by its unappreciative Victorian guardians.

But – and this is a big but – what a city the Victorians constructed in place of that which they knocked down. The new university on Gilmorehill sought to replicate some of the medieval drama of its demolished High Street predecessor. It’s a glorious place to visit today, set atop the beauty that is Kelvingrove Park.

For the wealthy, Victorian Glasgow was a playground. Vast parks were a key part of  city planning, and the legacy remains today. Glasgow boasts more green oases than any city its size in Europe, and Kelvingrove and the Botanic Gardens off Byres Road are worth a visit for a leisurely stroll amongst the greenhouses. Victorian ladies of the merchant classes had armies of servants to attend to their every whim. Glasgow’s salons and tea rooms were legendary – none more so than those established and run by Kate Cranston who set up Miss Cranston’s Tearooms across the city, offering the young genius Charles Rennie Mackintosh a chance to dazzle with his revolutionary designs. The beautifully restored Mackintosh at the Willow tearooms in Sauchiehall Street reopened recently.

Of course, there were victims of Glasgow’s prosperity. Glaswegians chose to forget the foul slave trade which fuelled its tobacco riches. The city’s elegant Georgian “Tobacco Lord” mansions were paid for in blood money. And residents of the glorious 19th-century terraces of the West End tended to turn a blind eye to the squalid living conditions of those living to the east in hovels. Waves of immigration from the Gaelic speaking Scottish Highlands and Ireland brought cheap labour to Glasgow’s factories. But at a price. Workers toiled long hours for low pay and went home to cramped and crowded living conditions. Cholera and typhus swept through 19th-century Glasgow, killing tens of thousands.

The city responded with demolition and the Glasgow City Improvement Trust tenements which can still be seen on the High Street. Glasgow brought clean water from Loch Katrine in an engineering feat of the 1850s. Twenty-six miles of aqueducts were built, 13 miles of hard rock tunnel bored by hand, four miles of iron pipes installed and water gushed into the city. The loch still supplies 230 million litres of delicious Highland water for Glaswegians daily. You’ll drink it from the tap when you visit. Bottled water never did make an impact in wine bars here.

I was born in Glasgow in the 1960s and grew up in a tenement in the 1970s before leaving for London in the 1980s. In many ways these were the city’s saddest decades. The Victorians had been destructive, but they left an extraordinary legacy of architectural beauty. My parents’ generation not so much. In pursuit of modernity, they hollowed out the city’s poorest areas, expelling vibrant communities to high-rise satellite districts, and carving a motorway through the city’s heart. As the great Billy Connolly once said, Glasgow was the only European city where they decided to build a ring road through the centre.

Glasgow is the perfect place to host Cop26. It’s the home of the industrial revolution, and so it has a debt to pay. But a qualified debt – its workers paid a heavy price both for industrialisation and deindustrialisation. Pride and suffering are carved into the city’s sandstone walls. It’s still the finest Victorian city in the world. Most of all, when you visit, you’ll meet Glaswegians – wry and humorous, emotional and welcoming. “Pawky,” as they say in these parts. And allergic to silence. Try to travel on a bus in Glasgow or ride the city’s subway system – the second oldest in the world – without your neighbour wanting to chat. They can’t help themselves.

Now you want to know what to do when you’re in Glasgow, don’t you? Here’s a walk or two… 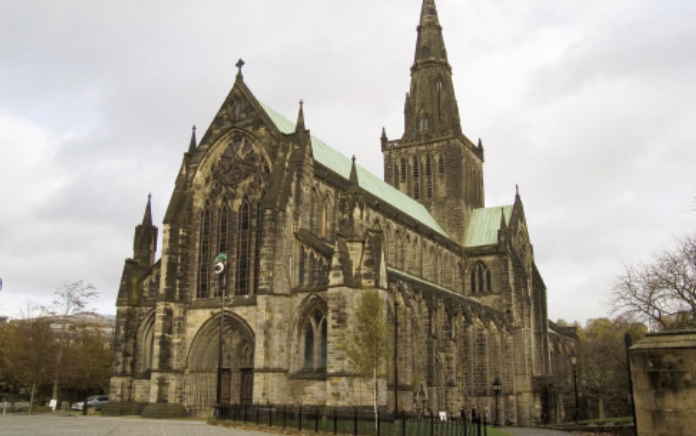 The cathedral is the oldest in mainland Scotland and survived the Reformation virtually intact. Saint St Mungo was buried here in the seventh century and the current building was consecrated in 1136. Rising above the cathedral is the Necropolis, one of the greatest graveyards of Europe where Victorian merchants vied for posthumous one-upmanship with tombs and inscriptions of pretentious impressiveness. 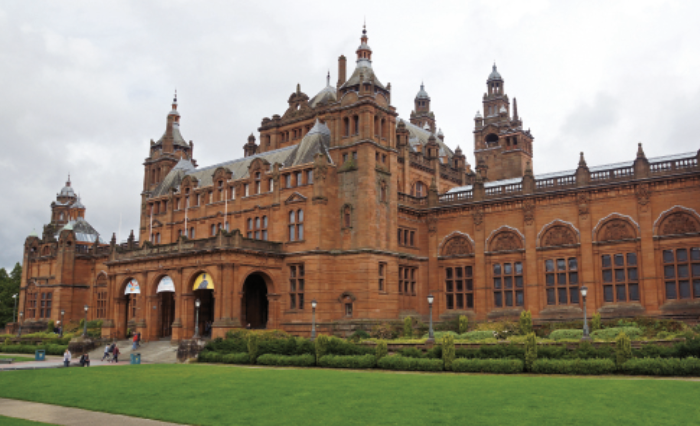 Kelvingrove Art Gallery and Museum and the University

Spend a day wandering around the city’s world-class art gallery in Kelvingrove, inaugurated for the Glasgow International Exhibition (1901). It houses a wonderful collection including Dali, the Scottish Colourists, the Glasgow Boys and Charles Rennie Mackintosh. Stroll along Kelvin Way over the salmon-replenished River Kelvin and through the university cloisters – this university is the second-oldest in Scotland. 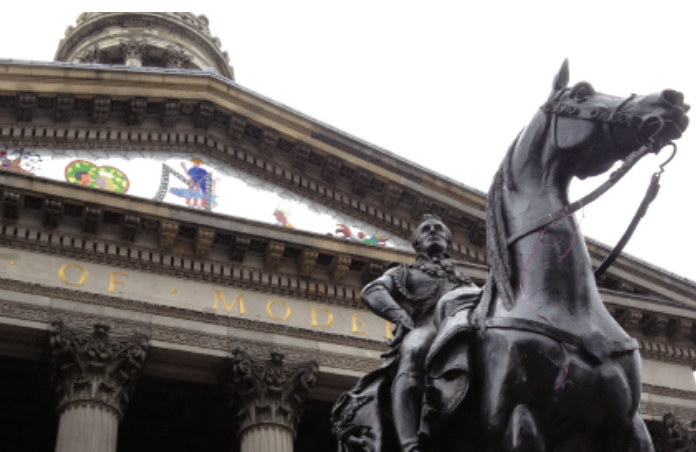 The Gallery of Modern Art and the Merchant City

Begin your tour at the Gallery of Modern Art (GoMA) which was built in 1778 as the home of wealthy Tobacco Lord William Cunninghame. Glasgow’s foremost shopping hub, Buchanan street, runs behind, Continue your walk from the front steps of GoMa. Victorians placed an equestrian statue of the Duke of Wellington here, and these days he often has a traffic cone placed jauntily on his head. Walk down Ingram Street and stop off for a bite Cafe Gandolfi, a city institution. 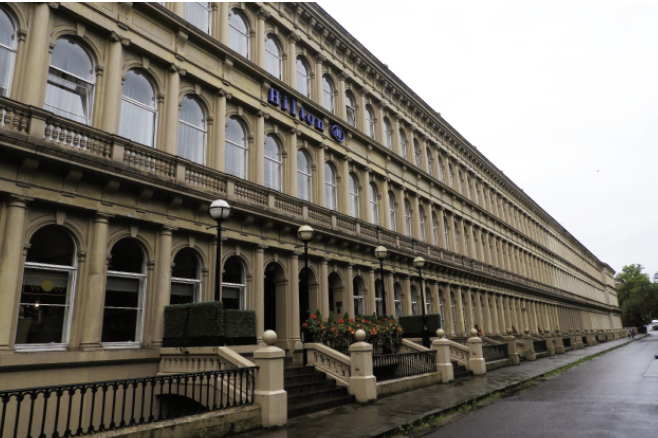 The grand terraces of the West End

Hop off the subway at Byres Road and walk along Grosvenor Terrace heading west. Keep going along Kew and Belhaven terraces and stop to linger on Great Western Terrace. You may choose to have afternoon tea in One Devonshire Gardens. You may even want to stay there if you’ve booked well in advance. Cross the road and walk back to Byres Road along Kirklee Terrace before diving into the Botanic Gardens. Finish your day with a whisky or meal at the Ubiquitous Chip, another fine establishment.

Not, of course, an exhaustive list. But visitors shouldn’t leave Glasgow if at all possible without afternoon tea in the beautifully restored (Charles Rennie) Mackintosh at the Willow tearooms in Sauchiehall Street (right). Book in advance (0141 204 1903).