Diary: The Hack is Back

Peter Cardwell is enjoying his retirement from SpAd life

[dc]P[/dc]Post-spad life, it’s always a bit weird encountering former colleagues still in Whitehall. I know the game, but I’m not a player anymore. Between battles with Cabinet Office vetters about book content, I try to cheer on my erstwhile colleagues either in the media or in person. At dinner of steak and salad with two spad friends – one in a department, one who works in No 10 – I sense the return of the adrenaline, pumping away again as they regale me with the trials with which they are daily dealing. I wonder if I miss the life they lead, and I think I probably do.  But I also suspect shares in Gaviscon have plummeted, as I don’t ever seem to need my nightly swig these days.

Lunch á trois at the Irish Embassy with the ambassador Adrian O’Neill and his deputy Gerald Angley. Adrian tells me how, having flown from London to Dublin for his holiday, the Irish regulations required Aisling and him to quarantine for two weeks, only for the O’Neills to be slapped with a further three weeks as their home county, Kildare, was put into regional lockdown. I decide not to tell Adrian that – quite within the regulations – I flew from London to Belfast to see family, later taking the train to Dublin, heading on to Waterford with a political friend, Frank Kennedy. We had a week’s welcome respite in the beautiful village of Lismore. And as I travelled via Belfast, not a moment of quarantine was required.

Our holiday had the interruption of two article commissions; one from The Daily Telegraph on the death of the former SDLP leader John Hume, the other from The Spectator on the retirement of Palmerston, the Foreign Office moggy. Having been a journalist for a decade pre-spadding, I have missed writing articles under my own name for the past four years. I happily bash out the articles on Frank’s iPad, as he devours the latest Philippe Sands. Frank wryly points out that whilst I have been asked to write 400 words on the death of one of the architects of the Belfast Agreement who won the Nobel Peace Prize, the commission is 800 words on the retirement of a cat.

Back in London, Sky News texts me and asks me to defend the government’s U-turns. A tough one, but of course I do it – I have a book to flog. Most of my media punditing has thus far been fairly good natured; generally paper reviews and gentle arguments with lefties. What I hadn’t banked on was the sheer force of personality of my opponent on this particular occasion – Observer leader writer and former aide to Ed Miliband, Sonia Sodha.She bests me convincingly, even managing to accuse me of not caring about poor children after I praise Marcus Rashford’s brilliant campaign to make the government think again about free school meals, a criticism that strikes me as a bit of a stretch. Sodha is a great debater and full of fire. Then again, if I’d advised Miliband, the Labour leader who paved the way for Jeremy Corbyn, maybe I would be that angry too.

Stroking my rescue cat, Jack, as he settles down for a nap, I realise he has a lump on his back. I fear the worst – will this be the end for my furry companion? I leap into action and book him the first available vet’s appointment. Thankfully, it is just an abscess, the vet using what looks like some sort of sterilised Stanley knife to slice and squeeze. A mere £178 later and Jack is back in my arms, a cone of shame attached to his neck for at least the next few days. Back at home, he leaps out of my arms, scales a wall and we don’t see him for a day-and-a-half. I spend the time worrying about him and writing an article for Your Cat magazine about the moggies of Westminster, which is becoming my leitmotif.

The senior civil servant I meet for a coffee in St James’s Park is worried about being seen fraternising with the enemy, now that my book has been announced. He hilariously describes his efforts to keep our appointment out of his departmental online calendar – the crime of a one-hour gap free of Zooms means his colleagues quickly fill it with successive meetings he then has to dodge.  As we skulk through the park, the colours around us reflecting the season’s turn from summer to autumn, I feel like a minor character in a Le Carré. Truly, this is the secret life of an ex-special adviser. 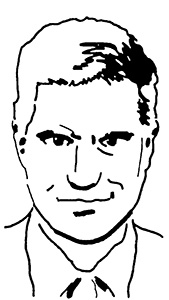 Peter Cardwell was a special adviser to four cabinet ministers
in the May and Johnson governments. His book The Secret Life
of Special Advisers is published by Biteback on 27 October