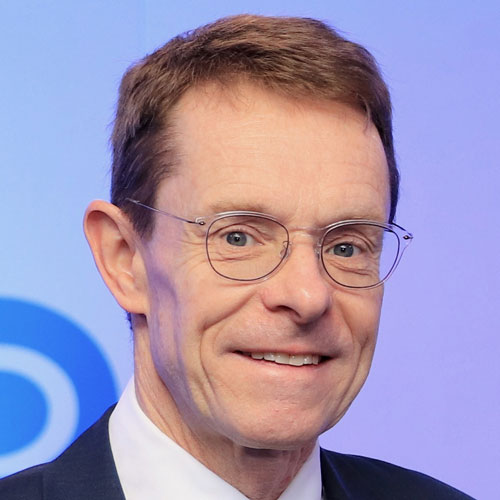 Mayor of the West Midlands

Andy Street has been Mayor of the West Midlands since 2017, winning against Siôn Simon by a hair’s breadth to become the first Conservative metropolitan mayor outside London. The HS2 advocate had ambitions of becoming a social worker but was turned down by Birmingham Council and, famously, M&S’ training scheme. He spent several years working in department stores, heading John Lewis as well as Bluewater shopping centre in Kent. During his time at John Lewis he was voted one of the ‘most admirable’ business leaders, overseeing a 50% increase in gross sales to over £4.4 billion. An outspoken critic of continually rising business rates, Street has gone on record saying “property is the way retailers have made money historically and we need a system that is a reflection of the future”. Aside from public duties, Street regularly runs half-marathons. Street multiplied his winning margin by an impressive ten times at the 2021 election, defeating former Labour cabinet minister Liam Byrne. This was credited in part to Street’s bipartisan message and collaborative approach.