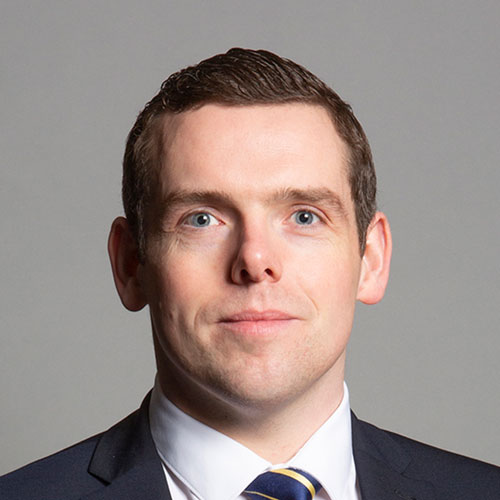 Douglas Ross is the leader of the Scottish Conservatives, and MP for Moray since 2017. Born in Aberdeen, Ross unsuccessfully contested Moray at the 2010 and 2015 general elections but was elected to Scottish parliament in 2016, representing the Highlands & Islands. The following year, he finally won his seat for Moray in Westminster, defeating the SNP’s Westminster leader, Angus Robinson, on a 16.5 percent vote swing. Ross saw this majority slashed in the 2019 general election to just 513. In May 2020, Ross resigned from his post as a junior Scotland Office minister following the Dominic Cummings lockdown controversy but won the leadership of the Scottish Conservatives just three months later, succeeding Jackson Carlaw in the post. Also sitting on the committees for Scottish affairs and procedure, Ross continues to balance his political commitments with being a professional football referee. Having previously missed parliamentary debates for matches, he received heavy criticism in November for using his official Westminster email account to take referee bookings. In recent months, Ross has written two letters to Boris Johnson urging his colleague to increase the number of seasonal agricultural workers to be allowed into the UK in 2021.