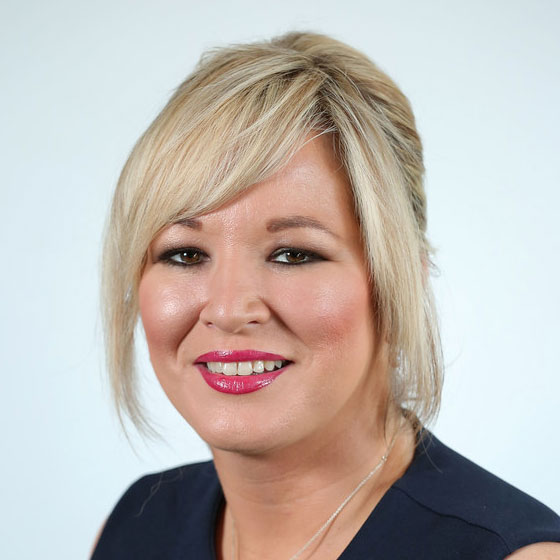 Michelle O’Neill is the vice president of Sinn Féin and, since January 2020, deputy first minister of Northern Ireland. She joined Sinn Fein in 1998, aged 21, after the signing of the Belfast Agreement and O’Neill became the first female mayor of Dungannon and South Tyrone in 2010. O’Neill was first elected as MLA for Mid Ulster in 2007 and sat on the assembly’s education and health committees. Following the 2011 elections, O’Neill joined the Northern Ireland Executive as minister for agriculture and rural development, and in 2016 became minister of health, overseeing the end of the lifetime ban on gay and bisexual men donating blood. She became leader of Sinn Féin in the Assembly in January 2017 following the resignation of Martin McGuinness and was promoted to vice president in early 2018. O’Neill has led the party’s calls for a referendum on Irish reunification amid the Brexit fallout. In January 2020, she took her seat as deputy first minister of Northern Ireland for the first time after the re-establishment of the devolved region’s executive. O’Neill has faced strong criticism for her vacillating response to the pandemic but recently pledged to take the new Covid-19 vaccine in public alongside Arlene Foster.