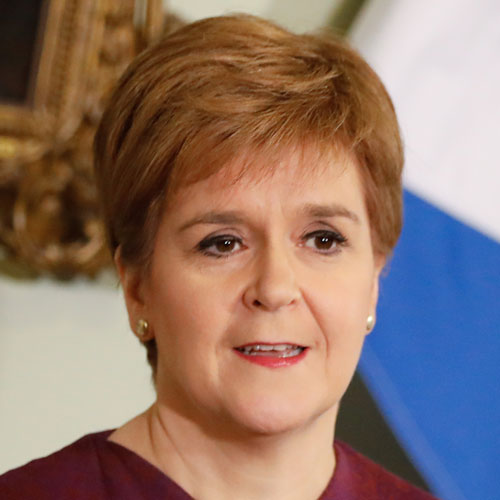 Nicola Sturgeon is the first minister of Scotland and the SNP MSP for Glasgow Southside. Having joined the SNP in 1986, she was first elected to Scottish parliament in 1999 and rose to become her party’s deputy leader in 2004. In the wake of the 2014 independence referendum, Sturgeon succeeded Alex Salmond as SNP leader and first minister and has since overseen a sustained surge in support for Scottish nationalism across the country. At the 2015 general election, she led her party to a landslide victory in Scotland, winning a remarkable 56 out of 59 available seats. Sturgeon retained a strong majority into 2019 as the SNP won 45% of the vote and 48 seats at the most recent general election. In 2020, Sturgeon made history, alongside Labour’s Monica Lennon, by making Scotland the first country in the world to make sanitary products free for all women. Sturgeon survived a major political scare in 2020 as Alex Salmond’s charges of sexual assault threatened to drag the first minister into scandal. She was further troubled by Salmond’s establishment of the rival pro-independence party Alba. But Sturgeon has been praised for her steady management of Scotland’s coronavirus policies. Her party failed to gain an overall majority in the Scottish Parliament at the 2021 elections, putting plans for an imminent independence referendum on ice.