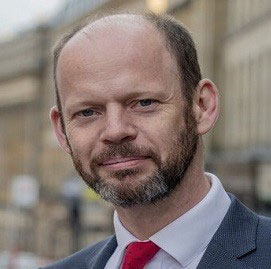 Mayor of the North of Tyne

Jamie Driscoll became mayor of the North of Tyne in May 2019, the first person to hold the role. His selection as the Labour candidate for mayor surprised many as he had only become a Labour councillor in 2018, having previously been director of a software development company. Driscoll, however, is head of the Newcastle branch of Momentum, and their support helped him win the candidacy. Driscoll and Momentum are considered to be on the left of Labour, yet Driscoll insists “I am not a radical” and blamed “the labels the media put on things” for some of his public criticism. His policy proposals included setting up a “People’s Bank” to reinvest profits in the local community, building social housing owned communally by tenants, and establishing an equalities unit to evaluate potential policies for their effect on minorities. He is also a fierce supporter of action against climate change; on his first day in office, he declared a climate emergency. These green policies won him a campaign endorsement from the American activist and academic Noam Chomsky. Driscoll expressed disappointment earlier this year when the North East freeport bid he supervised was rejected by the chancellor.