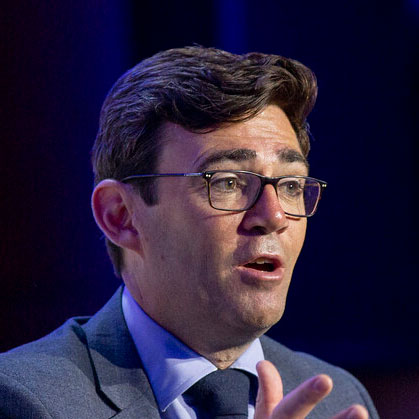 After a 16-year stint in parliament, Andy Burnham became the mayor of Greater Manchester in 2017. The MP for Leigh from 2001 until his election as mayor, Burnham rose quickly to hold cabinet posts under Gordon Brown, including health secretary and culture secretary. In 2015, Burnham finished second to Jeremy Corbyn in the Labour leadership contest, after first running for the party’s leadership in 2010, when he finished fourth. Burnham rose to national prominence as a campaigner for the Hillsborough families, persuading Gordon Brown to establish the Hillsborough Independent Panel, which led to the second inquiry into the 1989 tragedy. A lifelong Everton fan born on Merseyside, Burnham has often been critical of London-centric politics: in 2015 he bemoaned the “Westminster bubble”, and has criticised the Conservative government for not meeting expectations on the Northern Powerhouse infrastructure plan. A strong supporter of devolution, Burnham hailed the new powers for Northern cities that came with the establishment of new mayoral authorities in 2014. Burnham gained national celebrity status in 2020 when Manchester was placed in the most restrictive tier of COVID restrictions, with some commentators dubbing him “King in the North”. Burnham has since refused to rule out a future bid for the leadership of his party. He is the bookies’ favourite to succeed Keir Starmer in the post.