Péter Márki-Zay is an independent politician running to become prime minister. He stormed through the second round of primaries, but what are his chances of winning against Viktor Orbán this spring? 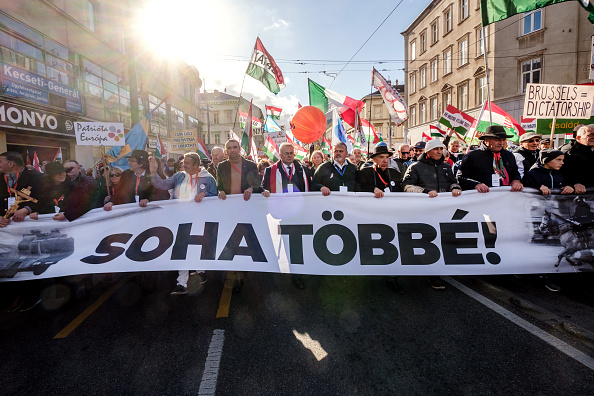 October in Hungary: the second round of the country’s primaries. In Budapest, a near-revolutionary atmosphere materialised after voters opted for Péter Márki-Zay to be Viktor Orbán’s opponent in this spring’s elections. In a historical moment for Hungarian politics, the six most prominent opposition parties united behind a single candidate. This is a colossal achievement after years of disagreement and discord and an opportunity to overthrow the Fidesz-KDNP coalition that has been in power for the last decade.

The alliance includes the centrist Momentum Movement, the centre-right Jobbik, the centre-left Democratic Coalition (DK), the Hungarian Socialist Party (MSZP), the liberal green party LMP and the left-of-centre, green Dialogue for Hungary, which have started to work on a common programme through lengthy negotiations and compromises since last October. Out of the five prime ministerial candidates, the final round was between Péter Márki-Zay, the independent conservative mayor of Hódmezővásárhely and Klára Dobrev, the vice president of the European Parliament (candidate of DK). The situation where the voters could choose from two candidates was made possible by the withdrawal of Budapest’s mayor Gergely Karácsony’s candidacy in favour of Márki-Zay, which could significantly affect the outcome of the second round. Firstly, it is generally believed that choosing between two contestants can result in a higher voter turnout. This might be one of the reasons why more people participated in the second round compared to the first one. Secondly, Karácsony’s abdication could alter the composition of the voters, too, as 220,000 new voters appeared in the second round, while 191,000 of the first round’s voters stayed away.

Márki-Zay ultimately received 57% of the votes: a huge surge from 20% in the first round. This means that Márki-Zay could triple the number of his votes for the second round, while Dobrev could only increase hers by 32%. Consequently, it can be concluded that the voters of the other opposition parties were more in favour of Márki-Zay and that a lot of people were mobilised in the second round. Perhaps they were those who did not initially believe that Márki-Zay had a chance of winning.

Why is the result surprising?

Márki-Zay was undoubtedly the dark horse of the elections. Until August, his support was under 5%, while Dobrev and Karácsony were named the most popular candidates in various opinion polls. In the last two months, however, Márki-Zay started to climb up in the polls, but nobody seriously expected him to qualify to the second round of the primaries. Therefore, it was very surprising when Karácsony announced the withdrawal of his candidacy after the first round in favour of Márki-Zay, despite the fact that he was more than 7% behind him. They argued that after considering different polls, Márki-Zay has a better stance against Orbán next spring.

There are different theories as to why Márki-Zay could make such a rapid advance in the last months and what the secrets of his successful campaign have been. One of these is that he has a direct line to the “people of the internet”. He’s appeared in several interviews and YouTube videos and fully two-thirds of his first-round voters were under 40 years. Additionally, he emphasised his identity as a patriotic Christian conservative dad with seven children who respects the values of others, which was appealing to a broad swathe of voters. By being an independent (void of a party), he could also exploit the anti-party and anti-politics sentiments in the country. He has introduced a new type of politics to Hungary: the anti-elite politics. This has been present in Western democracies for a long time and tends to gain considerable support, especially in times of crisis or when democracy is under threat. On the other hand, considering the long-term success of these movements in other countries, it can be observed that after the vast initial support, they often lose popularity as they are unable to fulfil their promises and tackle the crisis (for example, the Five Star Movement in Italy, Syriza in Greece, and Podemos in Spain). Accordingly, we can see this flare-up of support in Márki-Zay’s case as his ability to convince people that he can bring about a real change in Hungarian politics.

Change in the opposition?

Márki-Zay and the Momentum Movement declared at the beginning of their campaign that the opposition should be purged of those who are “under the shadow of corruption”. It was astounding that this trend started to emerge during the primaries, as some politicians lost support in the opposition because of accusations about their pasts. The most prominent figure of this trend was Csaba Tóth, a member of MSZP and candidate in Zugló. Before the first round, this district was in the crossfire of public attention as Tóth’s support was one of the most divisive topics in the opposition. Eventually, all parties withdrew their support for him and stood behind the other opposition candidate, the famous anti-corruption MP, Ákos Hadházy (who then won by a landslide in the first round). This event signalled a critical change in the opposition’s perception, as it gave more authenticity to their promise of cleansing the country of corruption.

The outcome of the elections was not only surprising to the public, but also to Fidesz, the governing party of Hungary. With Márki-Zay’s win, Fidesz needs to rethink its campaign for next spring as it targeted Ferenc Gyurcsány, the former prime minister of Hungary and the leader of DK (also, the husband of Klára Dobrev) and portrayed the left parties as his puppets. However, Márki-Zay is from the right, which could attract more of Fidesz’s voters towards him. In 2018 he unexpectedly won the mayoral race in the city of Hódmezővásárhely, previously a Fidesz stronghold for decades.

Márki-Zay’s chances next spring are more complicated due to not having a party behind him. Although this may have contributed to his success so far, it could become a disadvantage in future elections. As the majority of the joint candidates who won in the constituencies in the first round are from the DK (33 of 106), the party was strongest only when in a united opposition. Diversity of voices within the opposition could end up being unfavourable, as the Fidesz’s success is often attributed to its cohesion and unity – precisely what the opposition lacks. It remains to be seen whether Márki-Zay will be able to unify the opposition parties or whether Fidesz’s campaign will divide and thus destroy them.