After the wildfires, Cop26 cannot be a failure

The Greek Ambassador on the climate, refugees and his problem with Greek islands

Ioannis Raptakis is Greece’s Ambassador to the UK, appointed to the position in October 2020. He has previously served as Greek Ambassador to Vietnam and Laos, and to India, Sri Lanka, Nepal, Bangladesh and the Maldives. 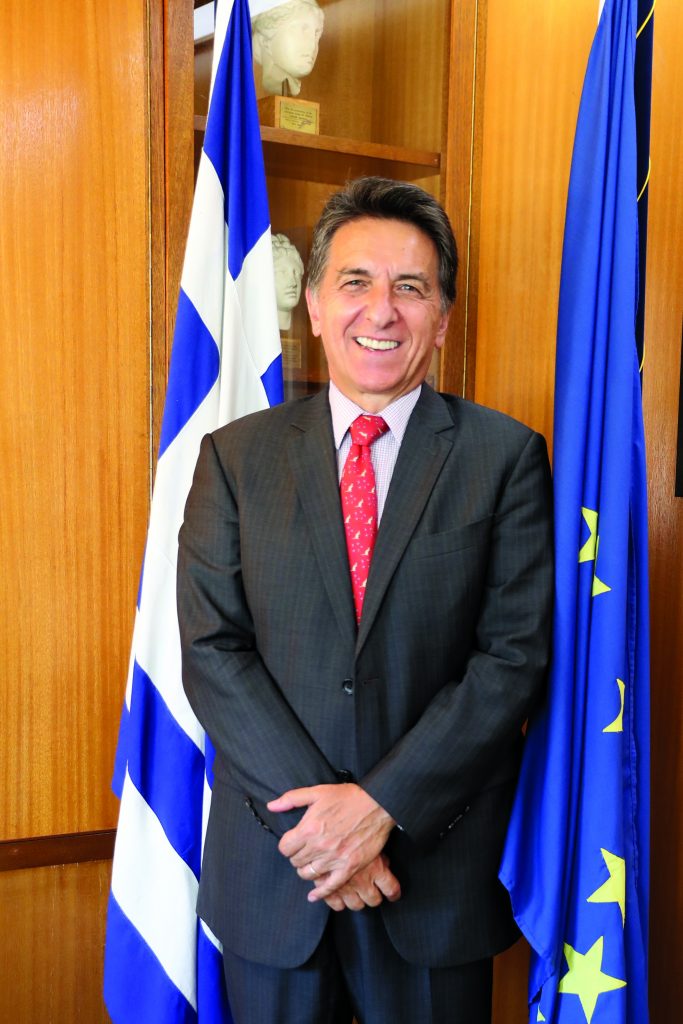 I came to London at a difficult time – my first professional dinner in London was on Zoom. There were 16 people and the Austrian ambassador (an old friend of mine) had sent us each food and drink to our houses. I sat alone at my dining table. I never thought I would have dinners like that, but it was smart.

The problem with Greek islands? You can’t stop yourself from returning. It’s the people on top of everything else. I go somewhere and I don’t know anybody and nobody knows me, but that changes. They send me emails asking me when I’m coming back and even packages with honey, jam and other Greek treats. Greeks are so warm and hospitable.

My wife, Georgia Soultanopoulou, is Consular General for Greece in Istanbul. Turkey is very important to Greece, so her job is very important. It is not easy but if you have a career, you make sacrifices. The worst part at the moment is that Turkey is still on the UK’s red list.

I enjoy watching and listening to the UK debates. I like the way British politicians speak, the way they behave and the way they exchange arguments in parliament here. The UK parliament is very different to our Greek one, which is more speeches and delivering statements. We don’t have your proximity or self-expression.

The migrant crisis has caused so much suffering. In 2015 alone, Greece took in one million migrants. Our country’s population is ten million so that’s one tenth of the population. The migrants aren’t spread out evenly either: some Greek islands have more migrants than locals. We are at full capacity.

The situation in Afghanistan is terrible, but there are already 40,000 Afghans in Greece. You’ve heard Minister Patel saying the UK will host about 20,000 Afghans – but the UK is a country of 60 million. It’s a difficult situation, but we have to be fair and share the responsibility.

We are geographically disadvantaged by being at the border. What should happen is a procedure to separate illegal migrants from asylum seekers, and then a subdivision to different European countries factoring in population size. One asylum seeker should go to Italy, two to Germany and so forth.

Usually I miss the weather in Greece. I can’t say that it’s very hot in the UK, but I’m actually starting to think of that as an advantage. These days, it is far better to have a cold and wet climate than aridity, heat and strong winds.

With global warming, this summer’s events were not a one-off problem. Temperatures rose to between 45 and 47 degrees celsius and 600 fires blazed across the country. This is a disaster that used to crop up every ten or 15 years. Now it happens every year.

Our responses have improved. Two years ago, a catastrophic fire killed over 100 people. This year, only one person died. We had the means and advance plans, but we also relied on international solidarity and support from the UK, Australia and others.

My prime minister, Kyriakos Mitsotakis, doesn’t call it climate change, he calls it the climate crisis. I think he’s right. Unless we all act, as we say in Greek, yesterday, we won’t get far.

The whole Mediterranean was affected by the fires. It was Italy, it was Greece, it was Algeria. At COP26, the Mediterranean countries want to present a united front to plan to minimise the impact of wildfires.

We all live in a village and this village is in extreme danger. It’s not just the Mediterranean experiencing devastation – it’s Australia, California and many others too.

Glasgow’s COP will not be the same as Paris’s or Copenhagen’s. Countries now understand that we are facing a natural disaster of unprecedented proportions; just look at the US, China and Europe’s ambitious targets.

Our country’s historical treasures and archaeological sites are under threat of damage by new, extreme weather conditions. At COP26, we’re organising a side event to spread awareness of our initiative, supported by the UN and Unesco, to protect our heritage and monuments.

I’m hopeful about the future. I cannot afford not to be. I think Europe can lead the way. I believe we can show the world what needs to be done.

Of course, the work does not stop with a declaration. After COP26, we have to implement our decisions…