Martyr in the Cathedral 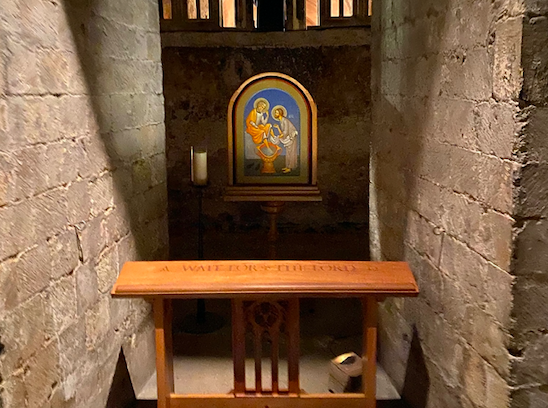 In Canterbury Cathedral crypt: the spot where Becket’s original shrine stood until 1220

In a year of ‘special advisers’ falling on swords, the tale of Thomas Becket, martyred on 29th December 1170, can read like an overdramatized telling of Dominic Cummings resignation – sacrificing himself for his colleague, though comparing Lee Cain to Canon Law might be a bit of push.

But the recent purge of Boris’s inner court at Downing Street reminded me how the wheel of political power and patronage is always turning – what medieval philosophers called the Rota Fortunae.

I was reminded of how quickly the very closest to the king can be exiled from power by the recent 850th anniversary of the martyrdom of Thomas Becket. On 29th December I attended the evensong service in Canterbury cathedral to mark the 850th anniversary of his murder. ,

As every British schoolboy knows – or used to know – it was whilst celebrating Vespers on 29th December 1170, around 5.30 pm, that Archbishop Thomas a Becket was hacked to death by four knights loyal to Henry II in the north-west transept.

Exactly 850 years to the hour that Becket’s head was left severed on the bloodied stone floor, I stood close to the very ‘Martyr’s Door’ (the door is the original) through which the knights had barged after Becket had ordered the doors to be opened, knowing full well the fate that awaited him.

The dramatic events of that infamous night were to change British history with Becket canonised as a saint in 1173. His shrine at the Cathedral swiftly became one of the most popular pilgrimage destinations in Europe.

Normally, on the 29th December, the Dean of Canterbury and the Archbishop of Canterbury lead a special candle-lit Evensong service in the packed cathedral, which stopped off  – like a passion play – at the various parts of the cathedral where the infamous events of Dec 1170 took place.

But this 850th anniversary year, the congregation was reduced to perhaps 80 members of the public. In the Dean’s introduction to this ‘very significant act of worship’, which began ‘as darkness falls’, the Very Rev Robert Willis reminded the audience that it was because of Becket’s martyrdom that ‘a flowering of pilgrimage began’ to Canterbury.

This year over 1000 events were planned to celebrate the double Becket 2020 anniversary, including the loan – from the papal church of Santa Maria Maggiore in Rome – of the blood-splattered ‘tunicle’ (vestment) worn by St Thomas Becket during his fateful last Vespers as archbishop. Alas, most were cancelled or postponed including the Thomas Becket: murder and making of a saint at the British Museum (this is now re-scheduled to open in April 2021).

The evening atmosphere in the cathedral was less baroque than usual due to scaffolding and more sanitisers than candles and social distancing. T.S Eliot was given top billing in the service, with two readings from his play, Murder in the Cathedral, commissioned by the cathedral in 1935. No public singing. The Archbishop of Canterbury Justin Welby — the 105th — held a rather disappointing new-looking wooden crosier – I was expecting at least a few jewels. The highlight was some noisy banging on the original 12th-century oak doors of the Cathedral that Becket ordered to be opened.

This came during a reading from Eliot’s Murder play: ‘Unbar the door! unbar the door!… We are not here to triumph by fighting…..Now is the triumph of the Cross…Open the door! I command it’.

Here Eliot helps us to unlock the mystery as to why the Becket cult and his popular appeal as a saint have remained so powerful for 850 years. In short, his appeal is that Becket was no saint before becoming anointed as a priest. His conversion is that of a man who loves his hunting, his money and his status. His conversion is all too human.

Becket’s murder – at the hands of four reportedly intoxicated knights, in full armour, claiming to be carrying out the wishes of Henry II – changed the course of history, and the events leading up to the killing remain one of the most debated episodes of the Middle Ages. Becket has had devotees but also enemies – such as Henry VIII, who destroyed Becket’s bones and the famous shrine which had done more than anything to spread Becket’s cult.

But why does the world remain so obsessed with Becket, and what does his fall and martyrdom tell us about the unflinching nature of political power.

In order to understand the Becket cult, it helps to remember his origins. He was born in London, the son of a middle-class draper: a relatively humble start, which has helped people relate to him. His career break was to get an early legal training in the curia of Theobald, archbishop of Canterbury, before studying law (and pleasure) in Bologna. He soon rose to being Henry II’s glamorous warrior chancellor – but when Theobald died, Henry decided that the Chancellor would be a suitable primate of the English Church.

At this point, in a well-known twist, Becket resigns as Chancellor and “converts” to a new ascetic life, scourging himself and devoting hours to prayer. He starts wearing a hair shirt, abandons his worldly ways and then defies his former close royal friend by putting canon law above regal authority – his own power over that of the state’s, the first Cummingsesque twist.

Despite being from lowly middle-class stock, he stands against Henry II’s insistence on the Church’s submission to the Constitutions of Clarendon – which Henry referred to as “ancient customs” but which really meant Caesar before God, royal laws before papal bulls, licenses or decrees.

That Becket stood unflinchingly firm, to the point of tactlessness – he could, for instance, have locked the cathedral doors when the knights arrived – also helps explain his popular appeal. Like Simon de Montfort, who led the Baron’s Revolt, his standing up to royal tyranny marks him as a popular rebel hero as much as a martyr.

But unlike de Montfort, a French aristocrat, Becket came from London-born middle-class stock. His social rise puts him in the same royal court “outsider club” as Cardinal Thomas Wolsey, a butcher’s son. (Sir Thomas More was too well born to be a member). England has always been a country of surprising social mobility, so long as you have – like Shakespeare – the right patron, education, brains and ambition. In the Middle Ages, the stage for advancement was the court, and Becket was a master of court politics and diplomacy.

Devotion to Becket has flourished ever since his death (I wonder, will Cummings cult ever reach the same heights – perhaps only among his beloved weirdos and misfits): within a decade, ten biographies had appeared, and hundreds of miracles were attributed to his intercession. In the 20th century, Becket’s cult has been boosted by TS Eliot, whose Murder in the Cathedral was first performed at the Canterbury Festival of 1935.

Will Cummings lock himself away in exile and write his tell-all Downing Street diaries only to emerge as a political martyr (it’s worth noting that his wife Mary Wakefield is a Catholic).  As Eliot has Becket reflect in the play: ‘While I ate out of the King’s dish/To become a servant of God was never my wish’. It’s worth remembering – few do – that he had only been ordained as a priest shortly before being made Archbishop of Canterbury by his one time close friend Henry II.

In the Antiphon sung by the choir at the beginning of the 850th vespers service, the Chapter of the Cathedral aptly chose the following Latin verse:

Becket’s own  ‘conversion’ from worldly, ambitious, hunting-mad chancellor to hair-shirt ascetic saintly defender of canon law, was what turned the London-born, middle-class draper’s son into the patron saint of England and European pilgrim travel.  The English like a popular rebel who sticks it to authority, whether it’s royal or council tyranny.

Which is why Eliot was clever to portray the ‘tipsy’ knights as public-minded ‘nationalist’ brawlers only wanting to serve their country (‘It is our country. We care for the country’).  We heard such dangerous arguments from Sir Oswald Mosley (running the British Union of Fascists in 1935).

The English like any sort of freedom fighter who takes on the state which is the battle that made Becket a martyr. In Murder in the Cathedral, Eliot hints that Becket may have staged his own dramatic death and is guilty of spiritual vanity.

When the knights charged at Becket, Grim bravely tried to protect him and nearly lost an arm. Another blow “shattered” a sword on the stone, causing sparks to fly. When Becket’s head was sliced off, “the blood turned white from the brain yet no less did the brain turn red from the blood”. Soon after the murderers’ departure, the monks collected the blood and brains and placed them into a silver basin. Already, their relic value was clear.

The mythologisation of Becket is an archetypal tale of a man who bids royal power to kneel before him, a feat literally achieved by the 17th-century lawyer John Coke, whose legal genius had Charles I kneel before the axe. His martyrdom seals the victory of his tamer of tyranny and defender of freedom image. But his reluctance to save himself begs the question, did he fancy himself a hero? Or was he just an impertinent adviser?

Had he merely been defenestrated, as his modern counterpart was, rather than decapitated, would he have justified himself and claimed it was his intention all along to make a stand for Canon Law – read: his own authority – before going into ‘self-imposed’ exile? Sounds about right, don’t you think.