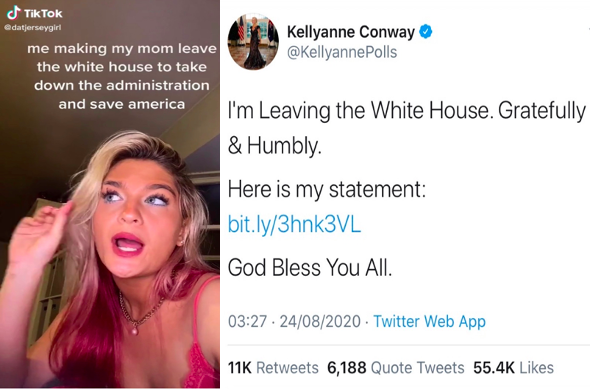 As Kellyanne Conway steps back from her role at the White House, her daughter, Claudia, becomes an internet sensation

I survived the entirety of lockdown without entering the world of TikTok. As my friends found themselves absorbed in at-home choreography, hard-hitting five-second satire, and trending lip-syncs, I stuck to the addiction of old faithful: Instagram. And it was on Instagram that I saw a video from TikTok in which the caption referred to Claudia Conway as “the new WikiLeaks”. The clip contained what an outsider like myself would perceive as classic TikTok content – it was made by a teen and contained some mention of Covid-19. However, this teen was no typical TikTok icon, she was Claudia Conway – a user with 1.4 million followers and a blue tick.

Claudia is the fifteen-year-old daughter of George Conway – founding member of The Lincoln Project – and Kellyanne Conway, Donald Trump’s 2016 campaign manager, and until August 2020, Counselor to the President. Google either of these high-flying figures however, and their achievements are overtaken by the dominance Claudia’s TikTok account. 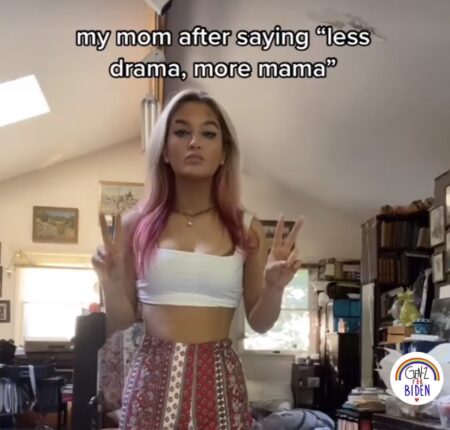 Claudia’s mother, Kellyanne left her role as counselor to the President to spend more time with family (Credit: Instagram)

Claudia has been steadily gaining traction on social media over the summer as her open criticisms of her parents’ political views went consistently viral. Claudia’s content reached new dramatic heights in August, when she posted a video on TikTok with mascara running down her face, and the caption, “you think you can hurt me my mom is kellyanne conway lol”. On the 23rd of August she tweeted that she would be seeking emancipation from her parents when she turned sixteen. A day later, Kellyanne Conway announced she would be leaving the White House. In Kellyanne’s statement she cited a need to spend more time with her children and concluded with the sentence, “For now, and for my beloved children, it will be less drama, more mama.” Two weeks later, Claudia posted a video of herself disappearing in and out of shot with the caption, “my mom after saying ‘less drama, more mama’”.

The achievement of her parents’ resignations has given Claudia an online kudos which she is reluctant to let go of. A TikTok posted on the 11th of September is a lip-sync that declares, “I was bored, so I ruined lunch, purposely, and I had fun doing it.” Over the top of the video Claudia has written, “me making my mom leave the white house to take down the administration and save america”.

The more Claudia goes viral, the more she seems to become educated on political spectrums and events. Following the death of Supreme Court Justice, Ruth Bader Ginsburg, Claudia posted video collage of pictures of the Justice, with the caption – “my hero. my heart is broken. may she rest in power. <3 #rbg”.

For a while, Claudia’s content became less fascinating. She consistently encourages her followers to vote against Trump, which yes, is obviously oppositional to her mother, but following her mother’s resignation, it felt like Claudia had lost her edge as an unlikely Washington insider. And then, on the 2nd of October it was announced that Trump was Covid-positive.

Claudia posted a video the same day of her lip-syncing saying, “that’s suspicious, that’s weird”, with text captioned on top reading, “my mom coughing all around the house after trump tested positive for covid.” And she was back – the unexpected leak of the inner circle – a day later it was confirmed that Kellyanne was Covid positive. Claudia posted a video of her wearing a mask with the caption, “im furious. wear your masks. don’t listen to our idiot f—ing president piece of s—. protect yourselves and those around you.” The height of Claudia’s fame was when she confirmed she had contracted Covid. Kellyanne tweeted a statement to discourage further media attention: “My daughter, Claudia, is beautiful & brilliant. She has access to top doctors & health care & lives comfortably. Like all of you, she speculates on social media.

Yet she’s 15, You are adults, We have COVID, but it’s clear who’s really sick”. Claudia also posted a statement that spoke of a miscommunication between her and her mother that had led her “to think she had told me her test was negative instead of positive, without me knowing she had three tests done. My mother did not lie to me. She has done everything in her power to ensure my safety and health and the health and the safety of the rest of our family amidst her (and my) diagnosis.”

In the last week Claudia’s TikTok bio, previously “just ur average teenage girl” has been changed to “VOTE BLUE” and her profile picture has shifted from a pouting selfie to a graphic containing the slogan “Gen-Z for Biden”. These changes suggest that although dramatic uproar appears to have calmed, she is here to stay as the unofficial youth correspondent in Washington.

There is a temptation to make Claudia into an analogy about America – generational divides, the chaos and the confusion, unpredictability and division. But I am reluctant to burden a teenage girl with that kind of weight, so all I’ll say is – it was worth downloading TikTok for her content. And to the friends who told me to enter the TikTok world months ago, I am sorry for scoffing, you were right. 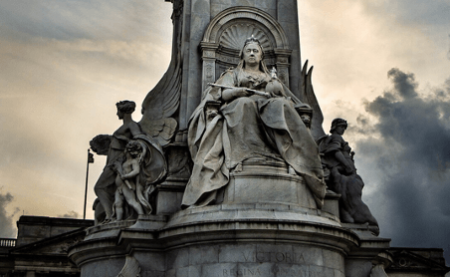 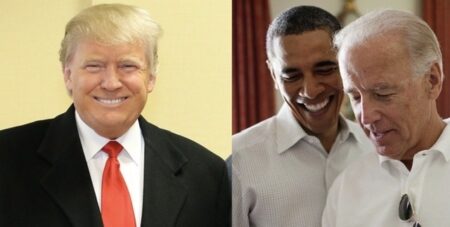 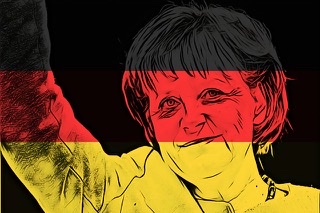