All’s not quiet on the eastern front

By François Valentin and Jorge González-Gallarza

With armed conflict now a serious possibility, it would be a huge risk to call out Putin’s bluff 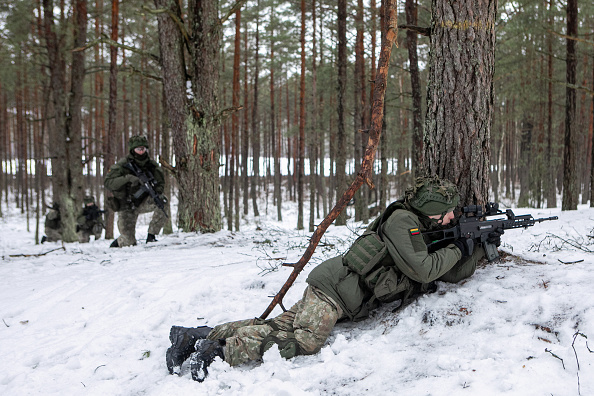 PABRADE, LITHUANIA - JANUARY 27: Lithuanian Soldiers from the King Mindaugas Hussar Battalion during shooting training in Silvestras Zukauskas landfill on January 27, 2022 in Pabrade, Lithuania. Tensions between the NATO military alliance and Russia are intensifying due to Russia's move of tens of thousands of troops as well as heavy weapons to the Ukrainian border, causing international fears of a possible Russian invasion of Ukraine. The U.S., Great Britain and other NATO countries have sent arms in recent days to Ukraine in a bid to deter an invasion. (Photo by Paulius Peleckis/Getty Images)

Some quotes do not age well. In October 2012, then incumbent president Barack Obama lambasted Governor Mitt Romney in a presidential debate after the latter claimed that Russia was America’s #1 geopolitical foe. Obama quipped “the 1980s are now calling to ask for their foreign policy back”, adding that the Cold War had been dead for over 20 years.

The bipartisan consensus in Washington at the time was emphatically in favour of a “reset” with Russia. Yet just 16 months later, Russia annexed Crimea and sent “little green men” to back separatists in eastern Ukraine. The result has locked large parts of that country into a permanent state of civil war. And while the international focus on Ukraine waned in the intervening years, the conflict has remained at boiling point: 13,000 have been killed and 30,000 wounded since 2013. Another 2 million have been displaced. Ukrainians have adapted to this horrific new normal by attempting to live their lives with carefree fatality.

This month has seen an already dire situation turn even worse. Russia has amassed 11,000 troops along Ukraine’s border, in both Russia and Belarus. The latter is now entirely in the former’s sphere of influence, since President Lukashenko resorted to Russia’s help to fend off mass pro-democracy protests at home. As a result, Russia has Ukraine cornered on its north, east and south (through Crimea). Putin is at once dismissing Ukraine’s worst fears whilst warning Western officials of “retaliatory measures” if his demands go unmet.

Those demands include the ostensibly bizarre guarantees centre around Nato: the first is a permanent bar to Ukraine and Georgia joining and the second is expelling all countries that have joined since 1997. In other words, Russia wants a Monroe Doctrine enforced in what it calls its “near vicinity”. Western leaders are in a tough bind, particularly President Biden, who would like to appear tough on Russia whilst avoiding armed conflict with a country against whom few Americans are willing to fight. Given Russia’s military strength, even if Putin is bluffing, Biden cannot afford to get the call wrong.

Russia’s demands should be understood in light of Putin’s claim, laid out in an essay from July last year, that Russians and Ukrainians are brothers separated artificially by historical misfortune. In that essay, Putin wrote that “the wall that has emerged in recent years between Russia and Ukraine, between the parts of what is essentially the same historical and spiritual space, to my mind is our great common misfortune and tragedy”. This narrative of brotherhood goes back to the Kievan Rus of the 9th century, and it is widely shared among most Russians, including the late intellectual Alexander Solzhenitsyn who wrote in 1991 that “all the talk of a separate Ukrainian people existing since something like the ninth century and possessing its own non-Russian language is a recently invented falsehood. We all sprang from precious Kiev”.

If the Russian psyche has long aspired to kinship with Ukraine, and with Putin having long theorised the need to act as the region’s custodian, why is the Kremlin escalating now – after eight years of civil war? Part of it is conjuncture. With energy prices soaring and demand for natural gas at an all-time high, Russia’s coffers are filling rapidly, with several EU member states feeling politically bound by their energy dependence. About one third of Europe’s natural gas comes from Russia. Putin is essentially forcing Europeans to sign long-term contracts with Gazprom by reducing on-the-spot sales. Germany, fresh off finishing its Nordstream 2 pipeline, is unwilling to adopt a hardline position. Russia is also preying on an internally unstable country. Prosecutors in Volodymyr Zelensky’s government have ordered the arrest of former president and oligarch Petro Poroshenko on charges of treason and support of terrorism. This attack is partially a ploy to eliminate a political rival. Poroshenko has enjoyed a boost in popularity after being soundly beaten by Zelensky in 2019.

And where does the White House fit into all this? Some lay blame on the current administration for being too soft on Putin’s aggressive and militarised diplomacy. The Atlantic Council’s Vladislav Davidzon argues that former President Trump’s erratic, boisterous gimmicks would have been a better match to Putin’s ploys. In contrast, historian and former State Department official Michael Kimmage believes that the Kremlin has been working for years to stop Ukraine’s pivot to the west. One might ask whether Putin is pursuing a grand strategy at all, or whether he is simply testing the waters to see what he can get away with. In hindsight, many analysts consider that the annexation of Crimea was the product of such opportunism. Putin also has the advantage of time. Whereas US presidents have tunnel visions that barely reach into the next midterm election, Putin is under no such pressure. He has the institutional memory of a monarch or the pope (he has in fact outlasted two popes since taking office in 1999) and approaches these power plays not as isolated incidents but rather as part of multiple iterated series of games where the lessons of the last crisis will inform the next one.

The fear at this point is that Putin may have stuck himself in a political corner. As the stakes get increasingly higher and Russia commits military and political capital in this venture, the path towards violent conflict widens. Like Hernán Cortés sank his ships when conquering Aztec territory to forestall the temptation to turn back, Putin has already sank many diplomatic ships and can no longer retreat from this situation without considerable concessions. In all likelihood, he has already integrated in his calculus the possible repercussions, including further sanctions. Yet with Russia less interconnected with the EU and US economies than 10 years ago, and with Europeans still reliant on Russian gas, sanctions will not bite as hard this time. Perhaps the only note of optimism for Europeans is that Ukraine is decidedly looking west despite all of Russia’s posturing, a testament to Europe’s considerable soft power. For all its huffing and puffing, Russia has not managed to match Europe’s attraction.