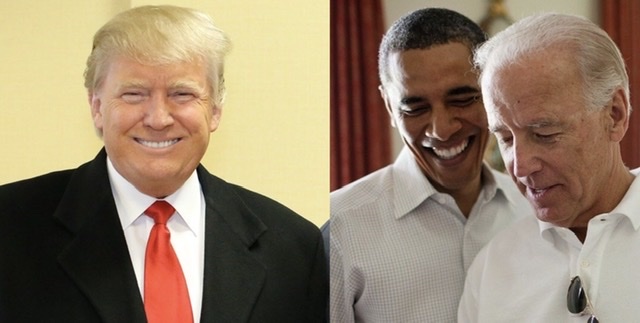 'Religion was the elephant in the room' at last night's Presidential town hall showdowns. It may yet decide the election, says William Cash

‘Two candidates, two TV networks, one time slot’ was how the New York Times billed the Town Hall duels between Biden and Trump last night. Politico used the more colourful analogy of it being a choice between watching Die Hard or A Wonderful Life.

No prizes for guessing which nominee was likened to everyman George Bailey, (played by James Stewart), who rescues a little suburban Mid-West town from the villainous clutches of an evil moneybags.

Yet perhaps one of the strangest things about the town hall showdowns was that, once again, religion was the ‘elephant in the room’ and kept at bay.

Like Biden, actor James Stewart came from a small town in Pennsylvania. Like Stewart, ‘Holy Joe’ – who stressed his Irish-American Catholic roots in the first TV debate  – comes from a ‘church’ family.

Yet perhaps one of the strangest things about the town hall showdowns was that, once again, religion was the ‘elephant in the room’ and kept at bay. This was despite the lead news story all week being the Supreme Court confirmation hearing of controversial Conservative Catholic Amy Coney Barrett.

If she is appointed before November, and there is every reason to suppose she will, Trump’s legacy will be assured – win or lose the election – with a 6-3 Conservative majority in the Supreme Court.

Secretly, many more metropolitan Republicans (and not just Republicans for Biden) can probably live with that and won’t be shedding too many tears on Nov 3 if the latest Cook Report is proved right and Trump is unable to close the ever widening polling gap chasm that has opened up since the bare-knuckle debacle of the first TV debate. Astonishingly, and I’ve seen little commentary on this remarkable fact, it opens up the very likely possibility of there being a Catholic president for the first time since JFK, along with no less than six out of nine of the Supreme Court Justices being Catholic (there have only been 13 since 1789). No wonder Biden is refusing to rule out packing (i.e. extending the numbers) the Supreme Court.

But don’t expect the God-is-a-Republican elephant to remain asleep much longer.

Yet religion barely raised an eyebrow last night.  There is a good reason for this. Neither side wants to turn religion into a political football as it could end up being a bad own goal. But don’t expect the God-is-a-Republican elephant to remain asleep much longer. Lagging in the poles, Trump is now likely to play the religious card much harder to mobilise his Christian base.

Barrett has so far played her confirmation hearings cooly, including winning big PR points when she held up a blank notepad showing she wasn’t using notes or a script. That such a ‘faithful’ Catholic is  being lined up to replace the iconic liberal rights pioneer Ruth Bader Ginsberg in the Supreme Court has provoked much liberal anger. But if Democrats attack Barrett, they risk coming across as bigoted, pursuivant-style ‘anti-Catholics’.

Thus the Biden camp face a dilemma. Swerving past religion is part of a likely tactic to avoid Biden being torn apart over his own questionable religious credentials. Any attempt to smear Barrett could look like Catholic-on-Catholic bigotry and could serve no useful purpose. Not when there are around 80 million Catholics in America.

It’s a weird election as it’s Biden who is the Catholic but Trump’s more likely to mobilise the religious vote as his base includes many who hold opposite views to Biden on most subjects, especially guns, God and abortion. No amount of Biden being seen holding a rosary or reminding people that he is a blue collar Irish Catholic boy from the suburbs will change that.

The last thing Biden needs is for Trump to remind Americans – especially suburban women, in swing states like Pennsylvania and Michigan – that Biden’s political record as a Catholic is abysmal. Biden has been endorsed by Planned Parenthood (abortions make up 95% of their ‘pregnancy resolution’ services) and has supported federal funding for abortions and school choice.

Biden’s political record as a Catholic is abysmal

Yet there is much irony about this religion dodging strategy. Biden is the latest in a line of Catholic Democrat presidential candidates with Irish-American heritage.  What’s unusual, however, is that he seems anxious about trying to mobilise the Catholic vote, unlike his Irish-American Democrat nominee predecessors. Al Smith (famously anti-prohibition) in 1928, JFK, John Kerry – and zero Republicans.

Yet Trump – whose Slovakian wife Melania is Catholic and has had an audience with Pope Francis – seems the one more comfortable trying to make Catholic values a vote winner.

But back to the verdict on the Town Hall debates. Many Americans probably did not bother to click their remotes to switch channels for the very good reason that there are far fewer swing voters in the US than in the UK elections, with the election being decided in a handful of key ‘swing’ battleground states. This point was well made to Mace by Jim Messina (Obama’s winning campaign manager in 2012) in our interview with him shortly before the first TV debate in Cleveland.

The other acute point Messina made was that what is really going to decide the election on Nov 3rd is Americans wanting to return to a normal sort of president. Messina believes in the cyclical theory of politics. The more garrulous, divisive and pantomime like Trump becomes – the more like medieval kings such as the unpopular King John or Henry III (whose own barons, led by Simon de Montford, rebelled against him) – the more likely Americans will reject him in favour of sleepy but at least sane Joe Biden.

Yet a few days ago, Cook took a more measured view and said that ‘while Trump obviously did himself a lot of damage, that was a lot of movement awfully fast. I wondered if the sample might be a bit too Democratic or whether the survey was taken too soon after the event’.

We shall see. What is certainly true – as Ed Miliband discovered in 2015 when the polls were horribly wrong  – is that it’s not easy to poll accurately with people who don’t use much social media, don’t live in cities, don’t watch the news and spend much of their day listening to the likes of Rush Limbaugh on the radio.

‘I still think he’ll win’ one of Trump’s longtime allies and a biographer of the president tells me.   ‘People tend to believe what they want to believe and no one in Britain has ever understood Trump. Most of the polling organizations are Democratic fronts, 90% of the national political media in the US are hostile to him and they are shouting of triumph to reassure themselves’.

On the subject of whether Americans will vote on Nov 3 for four more years of Die Hard or prefer A Wonderful Life, it’s worth remembering that in the latter, all seems lost for Stewart until he is rescued by an Angel called Clarence. Maybe Covid is Biden’s own Clarence.