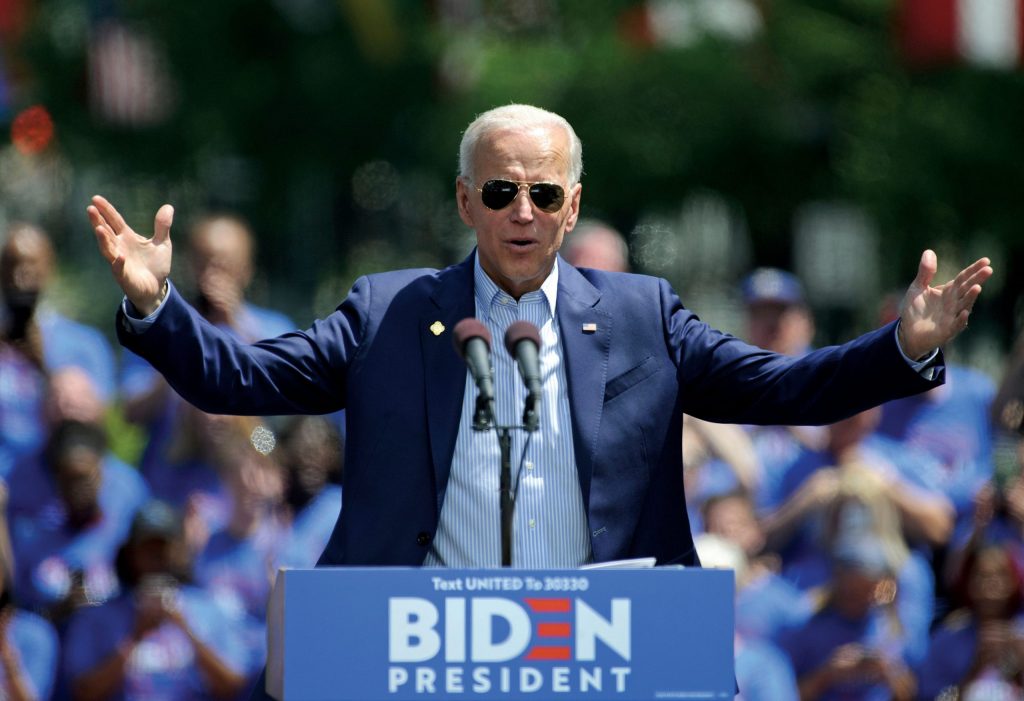 As a report reveals that Joe Biden will benefit from his son‘s deal with China's largest energy company, Nicholas Wapshott explains why he still has the best chance of winning the Presidency

If Americans want to dump Trump in November, they must find a way to like his Democratic rival, Joe Biden. Twice before Biden has offered himself as a presidential candidate; twice before he was rejected, in favour of, first, Michael Dukakis, in 1988, then Barack Obama, 20 years later. In 2016, having served eight years as Obama’s vice president, it may have been third time lucky for Biden, but he dithered, and by the time he was ready to run, Hillary Clinton had buttoned up the nomination by snaffling all the big party donors.

In normal times, Biden has appeared too bland, too slick, too much of a Washington insider to appeal to the ardent, idealistic activists who pick Democratic candidates. But these are not normal times. The noble Republican Party of Abe Lincoln and Teddy Roosevelt, of Ike and the Bushes, father and son, is long gone and has mutated into the party of Trump. For once, Democrats have put aside their idealism and chosen a champion simply because he stands the best chance of winning the presidency. The young radical Democrats who would have been happy to line up behind Bernie Sanders, a self-proclaimed democratic socialist, or the ever-bossy busybody Elizabeth Warren, were smartly overruled by older, silent members of the party who simply want an end to the quotidian turmoil and national shame of the orange-skinned, sketchy-haired reality show host occupying the White House.

For once, Biden’s blandness and his self-evident middle-of-the-road decency has proved an asset. Never mind he has been in Washington since he was elected to the Senate aged just 29 – he had to wait until his 30th birthday before he could be legally sworn in –  and that his career is peppered with missteps and malapropisms. He was conceived in 1942, the year the US joined the war against Hitler, and although not quite a baby boomer, he appeals to the vast army of older anti-Trumpers appalled that pivotal social issues for the sixties’ generation, such as civil rights for African-Americans, gay rights, and abortion on demand, are threatened by Trump’s need to cravenly flatter his reactionary base. All politicians claim that the current election is the most important ever to be fought, but this time they have a point. For conservatives, the November ballot is the last chance to turn back the progressive tide of history; for liberals, it is a chance to confirm their devotion to making America a more tolerant, inclusive, civilised place.

A true blue-collar Democrat brought up in the smokestack city of Scranton, Pennsylvania, Biden is not an obvious progressive leader. His record on women is at best mixed. And the election hinges on educated suburban women in cities like Philadelphia. He has been criticised for smelling the hair of women as their husbands accepted awards from Obama, and he has been accused of sexually assaulting women, which he hotly denies. Despite as a Roman Catholic being a fervent opponent of abortion, he strongly supports a woman’s right to choose a termination. “I do not believe that we have a right to tell other people, women, that they can’t control their bodies,” he said.

But he has won sympathy from women for his exemplary behaviour in the face of the deaths in Christmas 1972 in a road accident of his first wife Neilia and his one-year-old daughter Naomi. Despite a hectic work schedule in the Senate, where he chaired the powerful Foreign Affairs Committee, Biden returned home to Delaware every night from Washington to tend to his two young sons, Beau and Hunter. His affection for his family –  he remarried in 1977 –  is truly touching, in particular his devotion to Beau, a former attorney-general turned soldier who served in Iraq and died of brain cancer in 2015.

Biden was faster than the Clintons to recognise that gay people deserved the same marriage and property rights as their straight friends, calling it “the civil rights of our day”. Although he opposed Sanders’s universal healthcare plan – giving everyone the government healthcare offered to pensioners – he intends to ensure that every American has access to affordable health insurance. “Everyone is entitled to adequate medical health care,” he said. “If you call that a ‘redistribution of income,’ so be it. I don’t call it that. I call it just being fair.” Despite the best efforts of the Republicans in Congress, and Trump’s broken promise to end it, the popularity of Obamacare is currently at an all-time high, with Americans backing it 55 per cent to 37 per cent.

But the pivotal voting group that made Biden the candidate – and is essential if Trump is to be ousted – is the vast body of African-Americans, who traditionally fail to make their mark at the polling booths in large enough numbers to sway elections. Biden’s record on black issues is as mixed as his record on women. He famously supported Bill Clinton’s 1994 Crime Bill, which tried to counter the widespread belief that Democrats were soft on crime by making longer sentences mandatory for a set of commonplace crimes. Among some liberal measures, the Violent Crime Control and Law Enforcement Act sharpened the laws on domestic violence and made the peddling of ecstasy and ketamine liable to long sentences. But the act led to the mass incarceration and lengthy sentences meted out to black people which, 25 years later, is widely seen by both parties in Congress as a travesty of justice that has torn families apart.

Biden may have expected to have become a hate figure among blacks for his part in increasing their misery, but he wiped his reactionary record clean by serving as an unswervingly loyal vice president to Barack Obama, who has repeatedly praised his former sidekick. For eight years, Biden worked to be a useful number two to Obama, for which he has been rewarded with the unalloyed backing of the congressional black caucus. African-American leaders have never been more powerful in the Democratic Party. It is they who vetoed Sanders, Warren and even Kamala Harris (whose father is Jamaican and mother Indian) in favour of Biden, whose floundering primary campaign was rescued by an overwhelming 28-point victory in the black redoubt of South Carolina.

Devoted Democrats are joined in their hatred of Trump by a vast army of Republican Never-Trumpers, some coagulating around The Lincoln Project, among them distinguished conservative thinkers George F Will and Bill Kristol, former presidential strategists Steve Schmidt and Rick Wilson, and journalists Rick Lowry and Andrew Sullivan. Trump may dismiss such people as elitist Washington swamp-dwellers, more devoted to the purity of the conservative message than in reflecting the views and prejudices of grass roots Republican voters. But that would be to underestimate the power of such articulate conservatives to encourage other life-long Republican voters to abandon their allegiance “one time,” as poker players say. As the former presidential candidate Mitt Romney is the only Republican in either house of Congress to repeatedly oppose Trump, the choice for voters is uncomplicated: vote Trump and you condone everything he says and does.

The success or failure of Biden’s presidential bid, however, rests upon the ability of the party to turn out young Millennial voters, whose failure to vote for Hillary Clinton four years ago is credited with allowing Trump to win the White House. Those young would-be voters appear to have learned their lesson by taking a prominent part in the recent Democratic primaries, where they mostly backed the left-leaning platforms of Sanders and Warren. The eventual victory of Biden came as a disappointment to them, and they may still stay home in November in belated protest at their failure to be granted an exciting candidate that reflects their radical aspirations. Instead they got Biden, a flawed, faltering, fumbling old guy whose long record in public service reflects the twists and turns of fashionable thinking among Democrats down the years.

Democrats are not confident that Biden can beat Trump, which may prove to be the key to their eventual success. Hubris is not available. They worry that Trump will savage Biden in the presidential debates, just as he menaced Clinton four years ago. They hope the American people, exhausted from Trump conjuring up an endless succession of crises, will see in Biden someone much like themselves: well-meaning, sincere, patriotic – a safe pair of hands. Trump has attempted, so far in vain, to demonise Biden as a Trojan horse who will allow American democracy to be dismantled by radicals, communists, wreckers, criminals, and anarchists. To which Biden’s response is simple: “Grow up, Donald Trump, grow up,” he says. “It’s time to be an adult.”