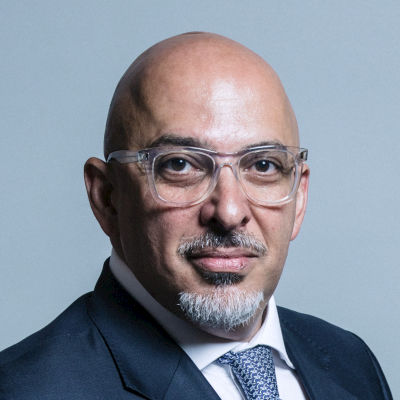 Member of Parliament for Stratford-on-Avon
19972
Majority

Nadhim Zahawi’s family was forced to flee Saddam Hussein’s regime and leave Iraq for the UK in 1976. He went on to work as European marketing director for the clothing distributor Smith & Brooks. In 2000, he co-founded YouGov and was CEO of the company up until his election to parliament in 2010. Zahawi had begun his political career in 1994 as a councillor on Wandsworth Council and later ran Jeffrey Archer’s ultimately unsuccessful campaign for London mayor in 1998. He first stood for parliament for Erith and Thamesmead in 1997 but was unsuccessfully. Following his election to Stratford-upon-Avon, Zahawi joined the Business, Innovation and Skills Committee and in 2013 was appointed to the PM’s Policy Board with special responsibility for business and the economy. He has also served on the Foreign Affairs Committee and the Speaker’s Advisory Committee on Works of Art. In 2015, he became David Cameron’s apprenticeships advisor. In 2018, Zahawi was appointed as parliamentary under-secretary at the DfE. In 2019, he became parliamentary under-secretary of state at the Department for Business, Energy and Industrial Strategy. In 2020, Zahawi was appointed parliamentary under-secretary of state for covid vaccine deployment.