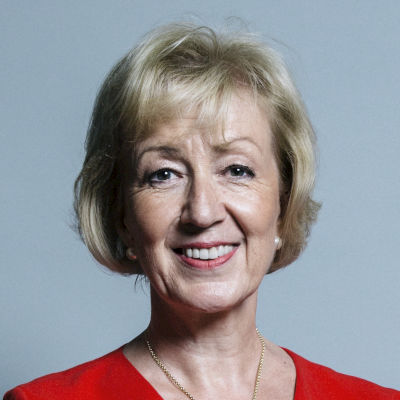 Andrea Leadsom’s most infamous political moment came in an interview with The Times wherein she claimed to be more qualified to be PM (over opponent Theresa May) due to her being a mother (May was not). The ensuing outrage led to her dropping out of the contest. That was 2016, but Leadsom has since maintained a prominent role in her party. She was originally a debt trader at Barclays de Zoete Wedd, before working as deputy director for financial institutions at Barclays. She later became head of corporate governance at Invesco Perpetual. In 2000, she was elected councillor. As an MP, she joined the Treasury Committee and in 2014 became economic secretary to the Treasury. In 2015, she moved to become energy minister. After her unsuccessful leadership bid, Leadsom was appointed environment secretary and in 2017 became Leader of the House of Commons. Leadsom supported the government’s Brexit plan for longer than other disillusioned Brexiter colleagues such as David Davis and Boris Johnson. However, in May 2019, she resigned from the cabinet, precipitating May’s own resignation. Upon Boris Johnson’s appointment as PM (which Leadsom supported), she became secretary of state for business, energy and industrial strategy.