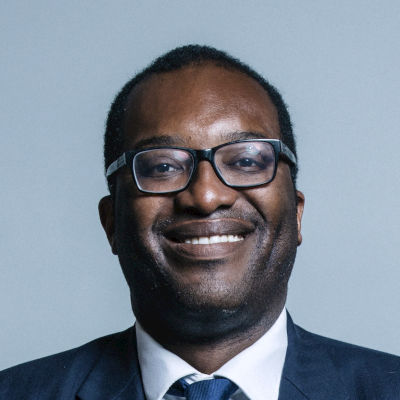 Member of Parliament for Spelthorne
18393
Majority

Kwasi Kwarteng was educated at Eton College and Cambridge, completing a PhD in economic history. Kwarteng became a financial analyst and wrote a book on the legacy of the British Empire. He first stood for parliament in 2005, unsuccessfully. Instead, he became chairman of the Bow Group from 2005 to 2006. In 2010, Kwarteng was selected in an open primary as the Conservative candidate for Spelthorne and was duly elected. In 2011, he co-authored Gridlock Nation providing analysis of and solutions to Britain’s transport congestion problems. In 2012, Kwarteng co-authored the book Britannia Unchained with fellow rising stars on the right of the party including Priti Patel, Chris Skidmore and Dominic Raab arguing for a drastic shrinking of the welfare state. In 2018, Kwarteng was appointed as a parliamentary under-secretary of state in the Department for Exiting the European Union, and was rewarded for his early support by Boris Johnson with a promotion to minister of state in the Department for Business, Energy and Industrial Strategy in July 2019. In this role, he was instrumental in implementing policies announced in 2020 designed to achieve net zero emissions in the UK by 2050. He was promoted to secretary of state in 2021 when Alok Sharma left the department to focus on COP 26. He has been a member of four committees: transport from 2010 to 2013; work and pensions from 2013 to 2015; finance from 2015 to 2017; and public accounts from 2016 to 2017. In 2016, he was one of 10 Conservative MPs to be funded by Saudi Arabia to visit the kingdom on a “parliamentary fact-finding” mission. Kwarteng has twice been funded by the secret group Le Cercie to attend conferences in Washington DC in 2008 and Bahrain in 2019. Kwarteng was formerly in a relationship with fellow MP Amber Rudd.