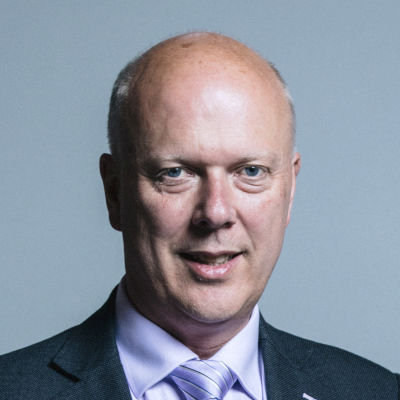 Member of Parliament for Epsom and Ewell
17873
Majority

Chris Grayling is a former BBC producer and editor at Channel 4 and has also run his own television production companies. Originally an SDP member, he became a Conservative councillor for Merton. As an MP, Grayling joined the Transport, Local Government and the Regions Committee, before becoming a shadow minister for health, transport, work and pensions and later minister in the DWP from 2010. As justice secretary (from 2012 to 2015), he followed a hard-line approach. Grayling introduced widely-criticised cuts to legal aid and the prison system, and was criticised for his department’s loss of data including that relating to Mark Duggan’s shooting by police. As transport secretary from 2016 to 2019, he provoked numerous controversies after gaffes such as personally injuring a cyclist and overspending. This earned him the nickname “Failing Grayling” from The Guardian. Boris Johnson hoped to vote Grayling in as chair of the Intelligence and Security Committee but was scuppered by criticism from fellow Conservative MPs. The Spectator concluded that only Grayling “could lose a rigged election”. In 2020, Grayling gained a £100,000 per annum role (requiring seven hours work per week) advising the British Virgin Islands on its environment strategy.