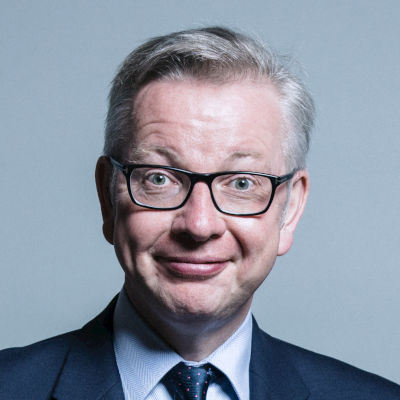 Born in Aberdeen, Michael Gove met Boris Johnson at university, helping him in his campaign to become president of the Oxford Union, a role that Gove himself took on the following year. Having been turned down for a job at the Conservative Research Department for being “insufficiently political” and “insufficiently Conservative”, Gove began a career in journalism working for The Times, Prospect and The Spectator and the BBC’s Today programme. He then became chairman of the centre-right think tank Policy Exchange. As an MP, he joined the European Scrutiny Committee and became shadow education secretary before becoming education secretary in 2010. Gove implemented wide-ranging reforms including the roll-out of free schools, allowing outstanding schools to become academies and reforms to GCSEs. These were controversial and perhaps led to his demotion to chief whip in 2014. In 2015, Gove was appointed as justice secretary. Gove is a lifelong eurosceptic and was one of the leaders of Vote Leave. Gove dramatically withdrew his support for Boris Johnson on the eve of his campaign launch in 2016 and stood for leader himself, coming third: The Spectator described Gove as the Brutus to Johnson’s Caesar. He was removed from the government by Theresa May in 2016 but later returned to the cabinet as environment secretary in 2017. Gove introduced a ban on single-use plastics by 2020, a ban on the sale of microbeads and harsher sentences for animal cruelty. Gove stood in the leadership election to replace May, again unsuccessfully. Gove was appointed as chancellor of the Duchy of Lancaster by Johnson, with special responsibility for no-deal planning.