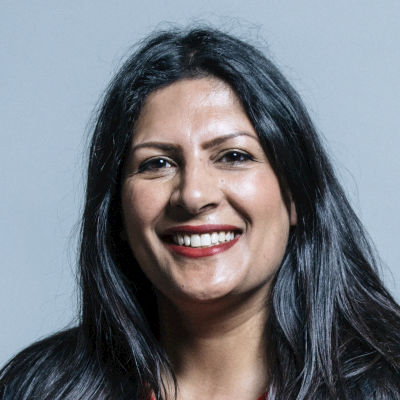 Preet Gill was elected in 2017 following the resignation of her predecessor, Gisela Stuart. Gill’s election continued the succession of female MPs Birmingham Edgbaston has had since 1953. She is the first female British Sikh MP and tells Mace that her father was incredibly supportive of this long-term ambition, though he unfortunately died before her election to Parliament. Gill says her father taught her “the importance of giving back to your community and helping others”. Gill supported the People’s Vote Campaign for a Second Referendum on EU membership and has voted for more EU integration forty-four times since 2017. She supported Kier Starmer in the 2020 Labour leadership election, and in April 2020 was appointed as Shadow Secretary of State for International Development. This role has led to Gill campaigning ferociously against the takeover of the Department for International Development (DfID); Gill’s pinned tweet on twitter is a video of her explaining why the takeover of DfID is a “huge mistake”, stating, “this Prime Minister is in retreat, and seeking to damage our soft power and undermine our moral credibility.” Gill is passionate about global human rights, equality and humanity. When asked of any literature that had influenced her, Gill cited The Alchemist, The Prophet and On the Road, explaining that reading these books in her youth “gave [her] a desire to travel and immerse [herself] in different worlds.” Gill is a firm believer in neighbourhood policing and says that rising crime rates and police cuts are always a top issue with constituents. She has also worked locally to campaign for safer transport – telling Mace that her proudest political achievements revolve around road safety. Her campaigns have led to non-invasive CT scanners being used in crash victim post-mortems as well as speed cameras being installed on the site of a fatal crash in her constituency.