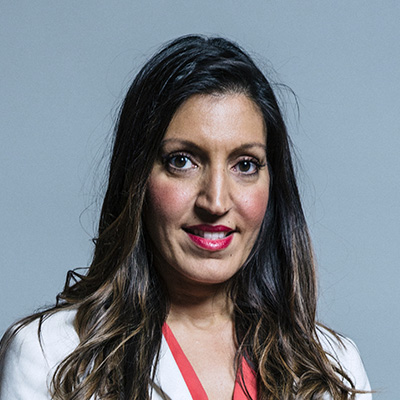 Member of Parliament for Tooting
14307
Majority

Rosena Allin-Khan was born and raised in Tooting. She has been the MP for her home constituency since 2016, after being elected at a by-election following the resignation of Sadiq Khan when he became Mayor of London. After training as a doctor and working at Homerton and Royal London hospitals, Allin-Khan did a master’s in public health, and went on to provide emergency humanitarian aid overseas. She remains an accident and emergency doctor at her local hospital, St Georges. Allin-Khan’s first role in electoral politics was as a councillor for the Bedford ward on Wandsworth Council. She was also deputy leader of the Council’s Labour group up until her election to Parliament. A few months after entering parliament, Allin-Khan was made shadow minister for sport, a role well-suited to her given both her medical background and her hobbies, which include boxing – she is the team doctor at Balham boxing club. After her re-election in December 2019, Allin-Khan ran to be deputy leader of the Labour party, where she came second. In April 2020, Kier Starmer appointed Allin-Khan shadow minister for mental health, and she has since spoken out on the need for mental health provisions amidst the coronavirus pandemic. In November 2020, she said, “the Centre for Mental Health found that approximately 10 million additional people will require some form of mental health support as a result of the pandemic. It is important that the Government recognise the additional need and have a strategy to address it during winter and beyond”.